Set in a subtropical paradise during the twilight era of the British Empire, Indian Summers explores the collision of the ruling class English with their Indian subjects, and the intricate game of power, politics, and passion that ensues. Julie Walters (Harry Potter, Oscar® nominee for Billy Elliot and Educating Rita) stars as Cynthia Coffin, the glamorous doyenne of an English social club, and is joined by Henry Lloyd-Hughes, Jemima West, Nikesh Patel, Roshan Seth, and Lillete Dubey.

Told from both the English and Indian perspectives, the drama of Indian Summers unfolds as illicit agreements, romance, and revolution abound. Though the English socialites are having the time of their lives in Simla, the local Indians have started to call for national independence, a path which is quickly rendering the world’s greatest empire helpless. As pressure builds, the two sides alternately clash and merge in a passionate and dangerous game.

Indian Summers is a series on PBS’s highly acclaimed Masterpiece Theatre. It is set in the 1930s, in the exotic country of India which is still a colony of Great Britain. There is a famous adage “the empire on which the sun never sets,” and that was applied to the British Empire in the 19th and 20th centuries. Indian Summers weaves a story of Indian and British people living together in what was considered the jewel in Great Britain’s crown, India.

The society that has existed for centuries is beginning to shift. The old ways of prejudice and separation are starting to become challenged by those who want change. At the beginning of the series, a little boy hurriedly runs away from a group of boys who are throwing stuff at him. He runs into a forested glade and all the people (adults included) stand there, not lifting a hand to help the poor boy.

Meanwhile, a young woman by the name of Alice Whelan is traveling on a train with her baby. She fans herself vigorously as she makes idle chit-chat with a woman who seems to be too nosy for her own good. All of a sudden, the train stops, and no one can figure out why. Alice, who has found it difficult to breathe, leaves the train to get some air. Dougie, the husband of the nosy woman that she was speaking to, comes out of the train and urges Alice to return inside for her safety. 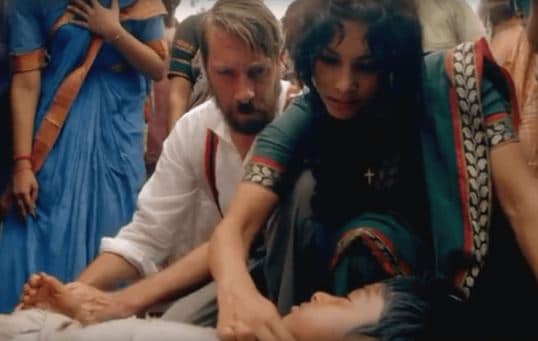 When Dougie goes to find out what happened to the train, he finds that it is the little boy from before who has stopped it. He seems to be badly injured. Leena, a sari-clad woman from the train (who had been sitting at the same table as him) is there to take a look at the boy. She knows instantly who the boy is and she states that he is considered a curse by many of the locals. Why? No one can figure it out. It is then that Leena and Dougie carry the little boy off to get his wounds tended.

Dougie’s wife, Sarah, shouts out the window, trying to get him to come back onto the train. But it seems that Dougie is eager to do what is right despite the fact that his condescending eavesdropper of a wife refers to anyone who is not British as them, as if they are some alien species. With that, he disappears for a while.

After this scene occurs, it show a sign that reads: “The Royal Simla Club.” The very bottom of the sign reads: “No dogs or Indians.” An acerbic reminder of colonialism in even its most vile form. An elderly woman by the name of Cynthia Coffin oversees the preparations of the club for the arrival of her summer guests. She is an imperious looking creature who is all business and no fluff. There is more to her than meets the eye. Something tells me that she will be a great force of evil or good in the upcoming episodes.

Elsewhere in India, there is a young man by the name of Aafrin of Dalal. He is Parsi and he lives at home with his family. While he lives in a small dwelling, he works in the palatial villa of Ralph Whalen and he acts as a clerk. His younger sister makes a comment about his assimilating to the British system, claiming that he is part of the propaganda. One day when he is at the villa, he witnesses a situation where an unknown vandal defaces a portrait of Queen Victoria with Devanagari writing in red paint. As Aafrin returns home, he soon notices remnants of red paint on his sister, Sooni’s hand. Talk about being caught red-handed! Needless to say, the police are arriving soon to search the homes of the locals to find the culprit. This particular plot should prove interesting as the show continues.

Indian Summers thus far is a fascinating show that is replete with an unraveling society. People who have been subjugated for centuries are starting to fight back, to support the man who is spearheading the entire campaign, Gandhi. Meanwhile, the British colonizers, who attempt to appear liberal (such as Ralph Whalen) are actually striving to maintain the status quo that has kept their subjects in line for a long time. The sign to me was offensive, but the fact that the camera zoomed in on it tells me that this show is going to throw us for a loop.  A society that has been standing for a long time will be shaken from the very pillars that it stands on and it will be challenged.

Indian Summers is off to a promising start and I am interested to see where it goes!

Our romance-themed entertainment site is on a mission to help you find the best period dramas, romance movies, TV shows, and books. Other topics include Jane Austen, Classic Hollywood, TV Couples, Fairy Tales, Romantic Living, Romanticism, and more. We’re damsels not in distress fighting for the all-new optimistic Romantic Revolution. Join us and subscribe. For more information, see our About, Old-Fashioned Romance 101, Modern Romanticism 101, and Romantic Living 101.
Pin this article to read later! And make sure to follow us on Pinterest.
By Kendall Turchyn on September 28th, 2015