The Film: Our Mutual Friend.

The Moment: Bella defends John and finally confesses her feelings.

The romance between Bella Wilfer and John Harmon (Rokesmith) from the period drama, Our Mutual Friend, began badly and seemed to continue that way for some time. Before either met, John Harmon’s father inextricably linked them by making it a condition of his will that his son marry Bella if he wished to receive his inheritance. Upon returning to England, John Harmon fell into company with a man to whom he bore a striking resemblance. During the man’s betrayal and attempt to take on his identity, the man was killed because of money. Finding himself in a strange position, and instead of explaining the situation to the police, John Harmon allowed everyone to believe that he was dead.

He came upon the idea of finding Bella and getting to know her before he decided whether to reveal that he was actually alive. The kindly old Boffins inherit the fortune in the wake of his supposed death and decide to take in Bella as a kindness to John’s memory. Learning of this, John obtains a position in their household as a secretary taking the name of Rokesmith instead of Harmon. Observing Bella he finds an intelligent and beautiful young woman and begins to fall in love with her. However, Bella turns out to be of a rather mercenary disposition believing that it is best to marry for money, not love and is firm on the point. When John declares his feelings, she rebuffs them harshly. Though heartbroken, John decides to continue on in his position not wishing to make her hate him should he reveal his true identity and so force her to accept him as a husband. 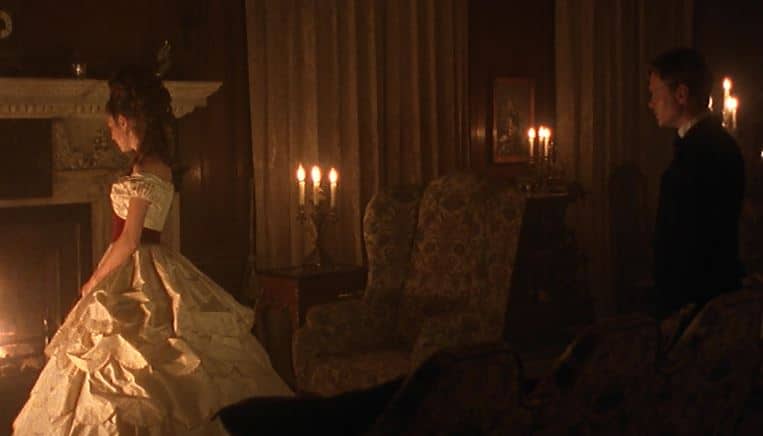 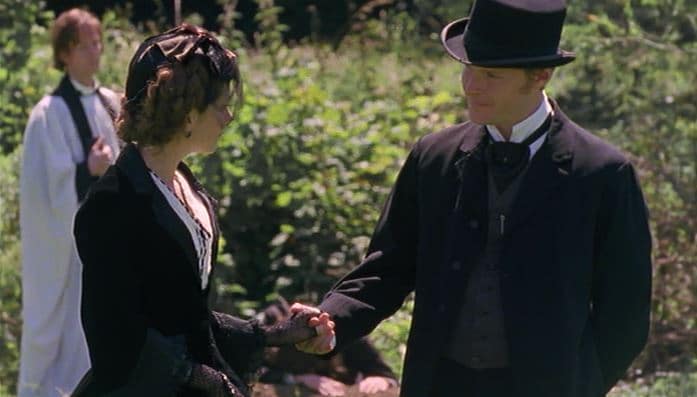 After some time has passed and Bella has grown a little wiser, the two begin to develop a bond, becoming friends. Bella apologises for the way she spoke to him. They grow close. As money begins to matter less to Bella, she is alarmed to observe that kindly old Mr. Boffin is turning miserly and cruel. He is told by an acquaintance about the proposal and one day calls them both into the sitting room to confront John. 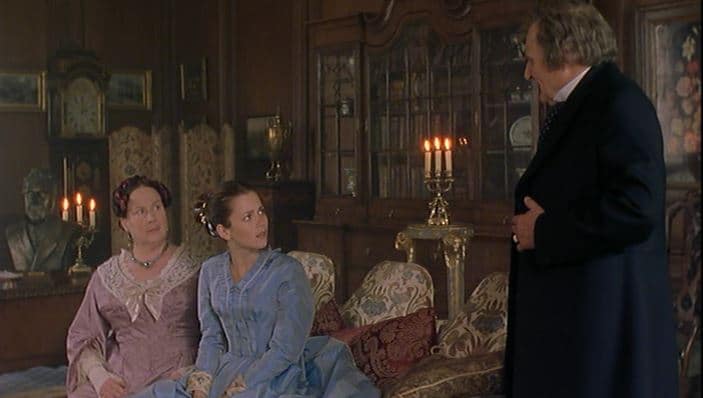 Mr. Boffin: Do not be alarmed, Bella my dear.  We’re here to see you righted.

John Rokesmith: I do, Sir. 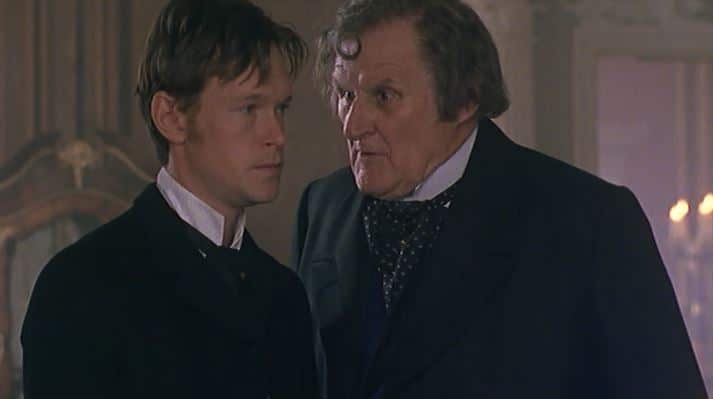 Mr Boffin: She wasn’t about to be snapped up by fellows that had no money to buy.

She is close to tears. 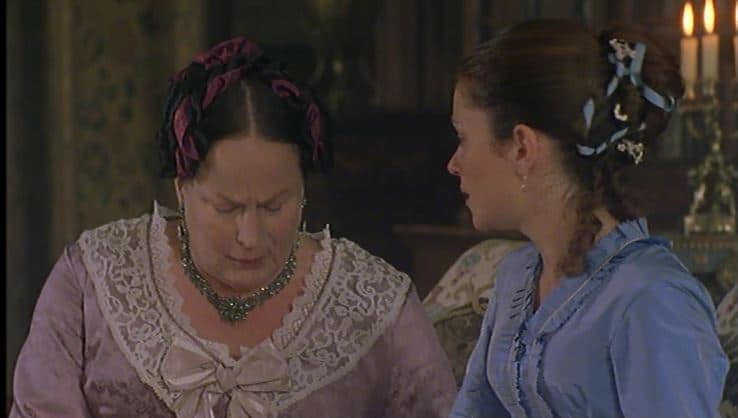 Mr. Boffin: Old lady, you hold your tongue. Now Bella, don’t you be put out. I’ll right you.

Bella Wilfer: But you don’t. You don’t right me, you wrong me. 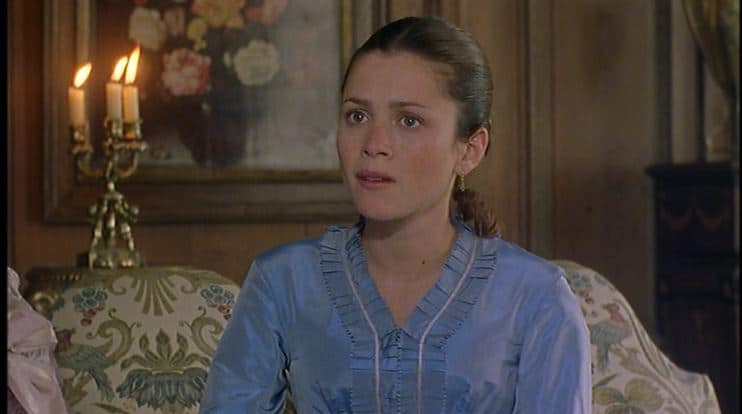 Mr. Boffin:  This lady did herself tell you of your presumption. Did she not?

Bella Wilfer: Did I Mr. Rokesmith, did I?

John Rokesmith: Do not be distressed, Miss Wilfer. 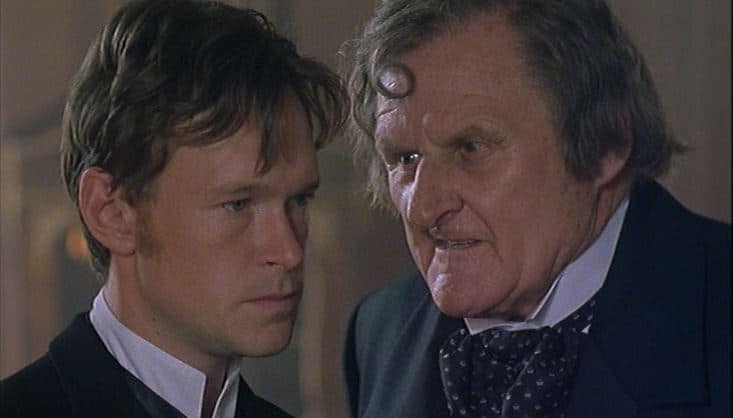 Bella Wilfer: But I’ve asked him to forgive me since and would again now if it would spare him.

Mrs. Boffin lets out a sob.

He turns to John.

Mr Boffin: Now what have you got to say for yourself?

John Rokesmith: My interest in Miss Wilfer began the moment I saw her. Even before.

Mr. Boffin: Ah this is a longer scheme than I thought. He gets to know about me and my property. And about Bella and the part she played in poor John Harmon’s story and he says to himself, “I’ll get in with Boffin.” But he didn’t know who he was dealing with did he Bella, my dear? He thought to squeeze money out of us and he has done for himself instead. 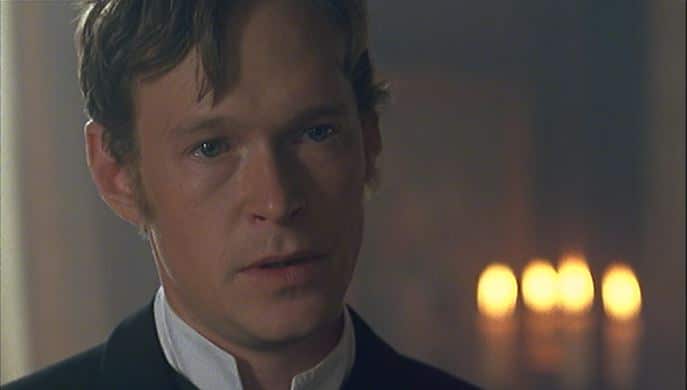 John Rokesmith: I have borne my position here that I might not be separated from Miss Wilfer and since she rejected me I have not urged my suit with one syllable or look. But my devotion to her has not changed except that it has grown deeper and better founded. My feeling for Miss Wilfer is not one to be ashamed of. I love her. And when I leave her and this house I go into a blank life.

Bella is profoundly moved by his heartfelt speech and brought to tears. 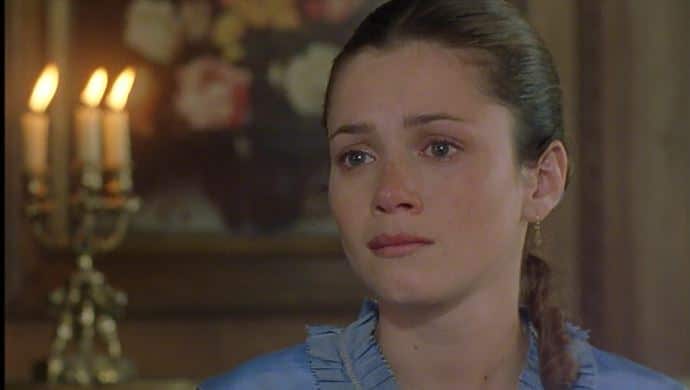 Mr. Boffin: Let me assist you to that blank life. You’re a pretty quick packer I hope.

Mr Rokesmith: You shall have no fear of my lingering.

Mr Boffin: You slander her. It’s money she makes a bid for. Money, money, money.

John Rokesmith: Mrs. Boffin for your delicate and unwavering kindness I thank you. Miss Wilfer goodbye.

He begins to leave. She looks after him growing even more upset. Suddenly, she runs after him. 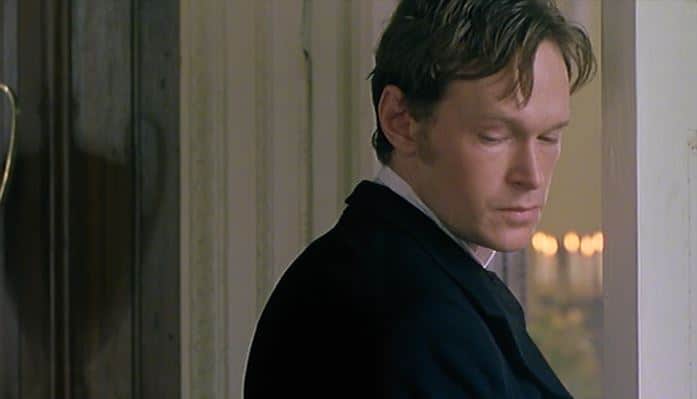 John looks back in surprise.

Bella Wilfer: Someone I pray or my heart will break. Don’t give me money Mr. Boffin. I don’t want money. Oh God help me. 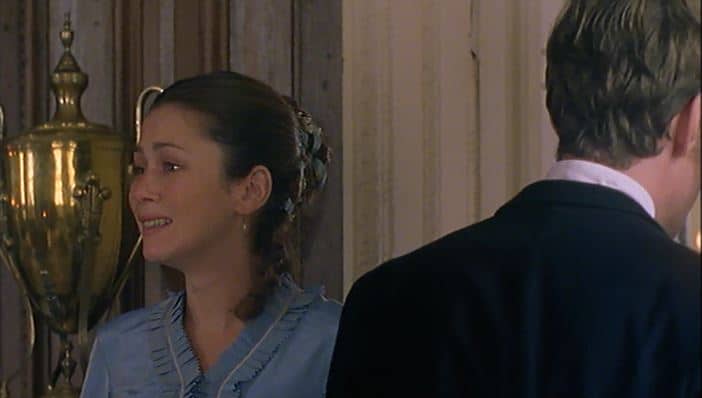 She walks over to Mr Boffin.

Mr Boffin: There, there my dear, it’s all right, you’re righted now.

Bella Wilfer: I hate you.

Bella Wilfer: I have heard you with shame for myself and for you. I am afraid that you have become a monster.

Bella returns to Mr Rokesmith by the door. 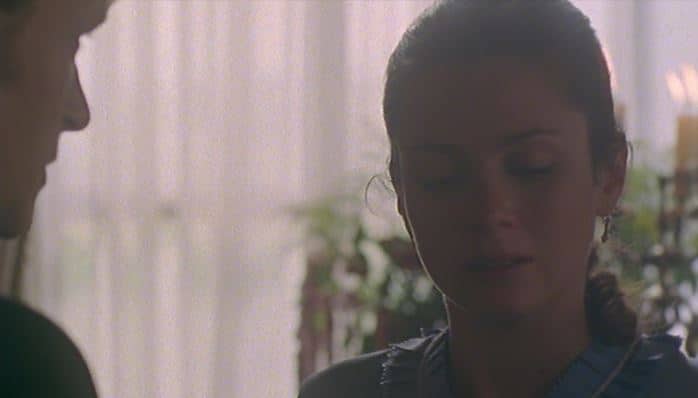 Bella Wilfer: Mr Rokesmith, I’m deeply sorry for the reproaches you have borne on my account. I earnestly and truly beg your pardon. The only fault you should admit to is that you laid yourself open to be slighted by a worldly shallow girl whose head was turned and was quite unable to rise to what you offered. 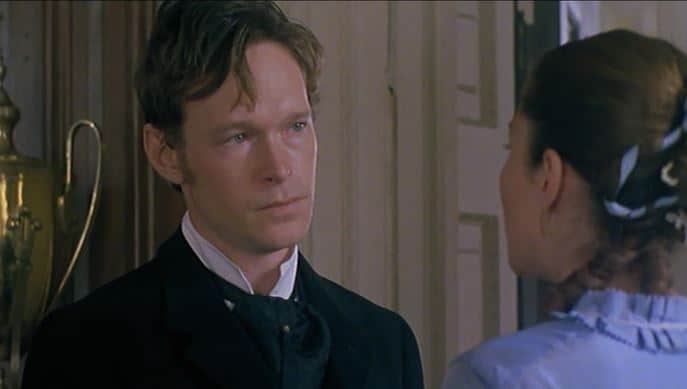 He listens quietly and then bends to kiss her hand. 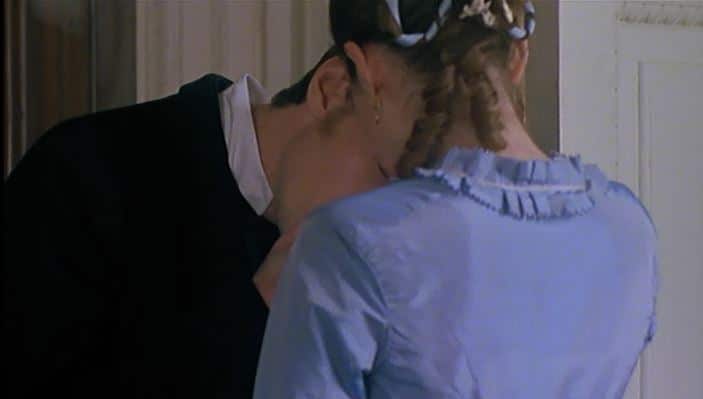 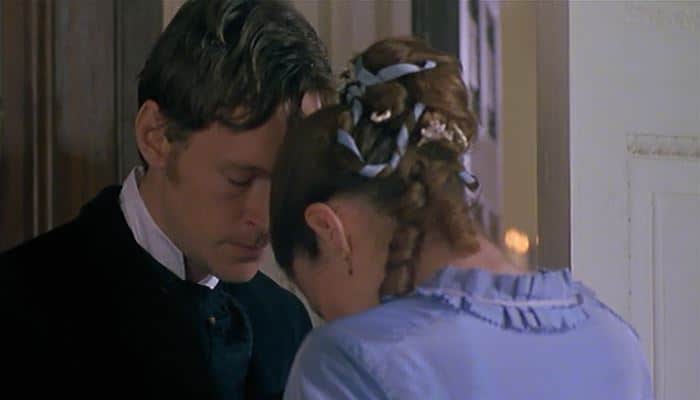 He then walks out of the door. Heartbroken at his departure, Bella runs into the arms of Mrs Boffin, sobbing.

Shortly after, Bella leaves the Boffin house to return home with the understanding that she will not get any money if she does. As she is walking home with her father, John runs to meet her, joyous.

She is surprised to see him, not understanding why he has come. 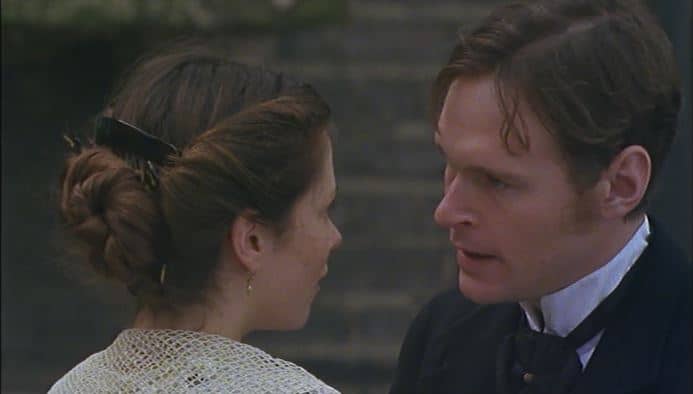 John Rokesmith: My gallant, courageous and noble Bella. You are my love?

Bella Wilfer: Well I suppose I am if you think me worth taking. 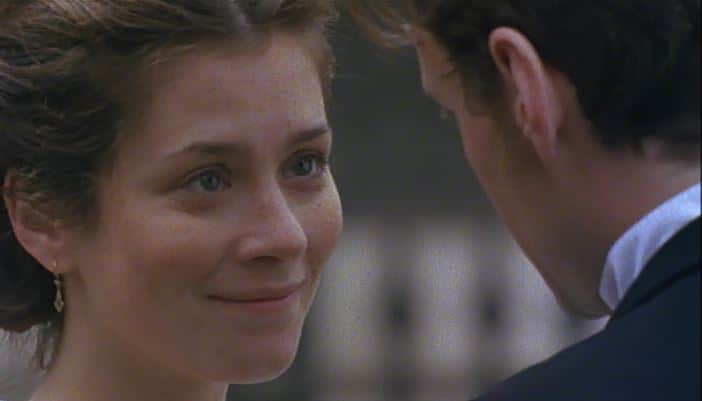 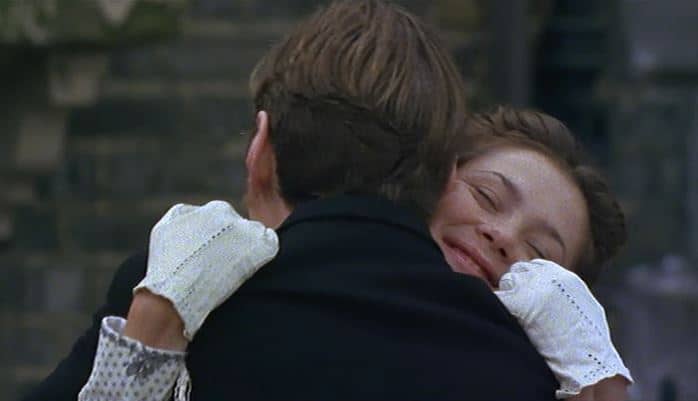 Do you like Bella and John’s romance? Or do you prefer Lizzie and Eugene?

Our romance-themed entertainment site is on a mission to help you find the best period dramas, romance movies, TV shows, and books. Other topics include Jane Austen, Classic Hollywood, TV Couples, Fairy Tales, Romantic Living, Romanticism, and more. We’re damsels not in distress fighting for the all-new optimistic Romantic Revolution. Join us and subscribe. For more information, see our About, Old-Fashioned Romance 101, Modern Romanticism 101, and Romantic Living 101.
Pin this article to read later! And make sure to follow us on Pinterest.
By Elinor Cackett on October 25th, 2015