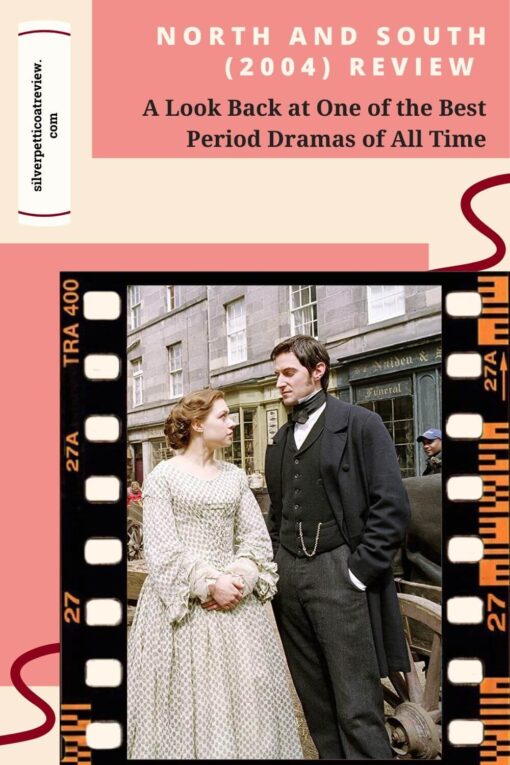 It’s hard to believe the beloved adaptation of Elizabeth Gaskell’s North and South first aired 11 years ago. Since its premiere, North and South has easily become one of the most popular and cherished period dramas of all time.

Adapted by Sandy Welch (who also wrote the brilliant script for the 2006 adaptation of Jane Eyre as well as Emma in 2009) and directed by Brian Percival (who later went on to win an Emmy for directing Downton Abbey), this adaptation of North and South helped bring a somewhat forgotten story once again into the limelight.

North and South was one of those quiet surprises that no one saw coming. In fact, the BBC didn’t have very high expectations for the series and did not heavily promote it.

However, when the series first aired in November 2004, the BBC’s message board for the series crashed because there were so many visitors. From there, word of mouth has only become stronger as it continues to spread to period drama lovers (or any drama fans) everywhere.

Not since Pride and Prejudice 1995 had there arguably been such a popular period drama based on a classic novel. No doubt the impassioned performance of Richard Armitage as John Thornton had something to do with its runaway success.

If you’re not familiar with the story, North and South is a four-part miniseries of Elizabeth Gaskell’s 1854 novel of the same name. It tells the epic love story of a young woman, Margaret Hale, from the South and an industrialist from the North.

When Margaret moves to Milton, a poverty-stricken factory town (after her father resigns as Vicar due to a matter of conscience), she crosses paths with John Thornton, who runs a cotton mill.

The first time she sees him, Thornton is treating a worker severely. Margaret misunderstands him from the start, thinking he’s a cruel master over the poor people who work for him.

Thornton, on the other hand, is attracted to Margaret despite her initial disdain for him. So with her prejudices of him in hand (there are some major similarities here to Pride and Prejudice), the romance between the two develops slowly.

In another important subplot, there’s a strike going on with all of Milton’s factories, which threatens to shut down Thornton’s business for good. Margaret befriends the Union leader, Nicholas Higgins (played by Brendan Coyle of Downton Abbey fame), which causes even more friction.

And then there’s the matter of Thornton’s controlling and overbearing mother (Sinéad Cusack), who is threatened by Margaret due to her son’s attraction to her.

So with a strong story frame to work with from Gaskell, a character-driven script with period-perfect dialogue from Welch, and some flashy filmmaking techniques from director Brian Percival to make it more visually appealing to a modern audience, North and South hit all the right notes.

North and South, in fact, is quite visually stunning. The costumes are gorgeous, the production design artistic, and the cinematography haunting. One of the most striking scenes is that of John Thornton moodily walking through his cotton mill as the cotton blows past him like snow.

And then, of course, there was that cast. With Richard Armitage’s casting as John Thornton and Daniela Denby-Ashe as Margaret Hale, the perfect blend of chemistry and talent was put together to produce on-screen magic.

The two worked off each other with wit, passion, and intelligence, encompassing their now-iconic characters with a modern sense and a classic sensibility. They both understood the essence of the time period they were capturing while also being aware that they were telling a story to a modern audience, which no doubt is partially due to Percival’s direction.

Though relatively unknown at the time, Armitage was in a perfect position to steal the hearts of viewers everywhere with his performance as the stormy (and yes, very dreamy) John Thornton.

While there had been previous adaptations, including one from the ‘70s starring Patrick Stewart, it was not so well known as Pride and Prejudice 1995, so there was no one really to compare his performance to. And like Firth, Armitage embodied the role of Thornton in a way that will continue to be one of the quintessential period drama leading man performances ever to grace the screen.

Perhaps what makes Thornton such a memorable romantic hero is that he is a classic hero in the likes of Mr. Darcy while also having the impassioned romantic nature of a Bronte Byronic – without the secretive dark side. Gaskell created a figure that encompasses both Austen and Bronte (Charlotte was a close friend of hers) with Dickens’s touch (he was the Editor of this book).

A Love Story to Remember

One of the most popular aspects of North and South is the romance between John Thornton and Margaret Hale. I’m not sure anyone pulls off the smolder quite like Richard Armitage.

Those longing stares (sometimes lasting for entire scenes), heated arguments, the brush of a hand, romantic declarations, and more – there’s a lot to love in this romance, and there’s a lot to swoon over with Mr. Thornton – just watch the ending.

And what makes it so memorable is that it’s not just a romance. No doubt the romance is front and center, but there’s also quite a bit of social commentary and important subplots that only work to make the story stronger and the romance more epic.

To this day, North and South is one of my go-to recommendations to just about anyone. I have yet to meet someone who doesn’t like North and South. Men. Women. Even some children. I always run into new people who have never seen or heard of it.

And, of course, after watching it, they too become fans. As a quick sell, I often pitch the series as “Jane Austen meets Charles Dickens with an epic romance similar to Elizabeth and Mr. Darcy, only more passionate.”

How much do you love North and South? Let me know in the comments!