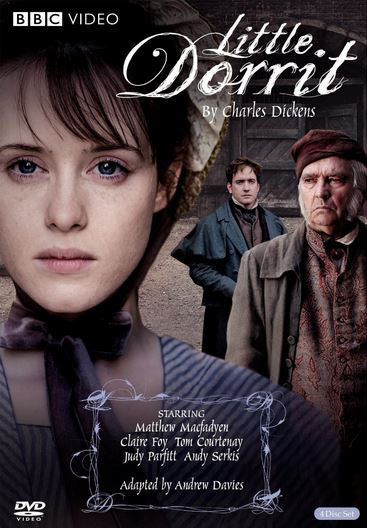 I’m a huge Charles Dickens fan, but it took me a long time to watch Little Dorrit because it’s not my favorite Dickens book. I just waited around until I finally felt like watching the miniseries. After watching it, I can now conclude it’s a great miniseries, one that period drama fans will most likely enjoy. The amazing cast really made the book come to life. Not to mention that there were so many famous BBC stars, it was hard to keep track of them all!

Little Dorrit follows Amy Dorrit (Claire Foy), a girl who takes care of her father in the debtor’s prison she was born in. She takes on sewing work with Mrs. Clennam, a stern, and harsh lady. In the course of her work, she soon meets Arthur Clennam (Pride & Prejudice’s Matthew MacFayden) and her life is changed forever. Her life begins to take many twists and turns from that point on. From fortune to love, Amy always maintains her goodness and faithful heart. 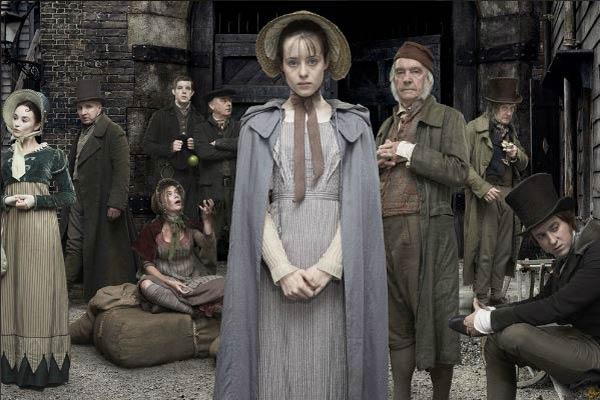 The tone of this movie is not always cheerful. I think the one ray of light was supposed to be Amy Dorrit as there wasn’t anyone she didn’t’ shower with kindness. The miniseries, at least on Hulu, is eight episodes long. Each one was filled with main plots and sub-plots. It was hard to keep track of them all. A few, it seemed to me, were even dropped entirely or never explained again.

However, it is the main plot of Arthur Clennam trying to right the wrongs his family has done by helping the sweet Amy Dorrit that will hold your interest. These two stories (Amy and Arthur) were well-done and blended together amazingly. Furthermore, the backdrop of Dickens’ London added to the feel of the movie. The scenery and costumes were given special care that made you feel like you were in Amy’s world. You could almost feel the cobblestones under your feet and the swish of petticoats on your legs. 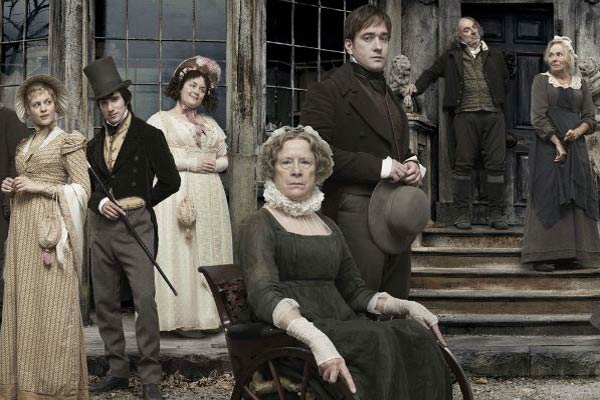 The acting in this miniseries was superb. As I mentioned earlier, the cast of Little Dorrit brought out all the BBC big starts. Eve Myles (Torchwood, Broadchurch) was convincing as Little Maggie, a woman with a mind of a child. Russell Tovey (Being Human), broke my heart as John Chivery and his unrequited love for Amy. I really can’t say enough good things about the acting thanks to several standouts. From Judy Parfitt (Call the Midwife), Andy Serkis (Lord of the Rings) as an evil murderer, to Claire Foy and Matthew MacFadyen as Amy and Arthur, there were no weak links.

Then there was the love story. Amy and Arthur’s romance was both frustrating and beautiful. I really sympathized with Amy because Arthur really fails at reading people. He doesn’t get that Amy loves him until John Chivery has to spell it out for him. Throughout the film, Amy remains steadfast in her devotion to him. You can watch the relationship build up over time. Thankfully, romantics are rewarded at the end of the film.

Little Dorrit does a great job of depicting class differences as well. Amy’s family, even after inheriting money, are still looked down upon by the upper-class. Mr. Dorrit never escapes the ghosts of his time in prison and this eventually drives him mad. Dickens’  novels were usually a social commentary of the times he was living in. You can detect that from the miniseries. You can see the harsh conditions of the debtor’s prison and the hypocrisy of the upper-class.

Overall, this is a great miniseries. Sometimes the pacing was a little slow, but the live-action was simply following the pacing of the novel. Dickens doesn’t write a short and simple tale. I really recommend this miniseries for fans of Dickens, romantics and period drama lovers.

Content Note: Rated TV-14. While there are a few suggestive moments and scenes of violence, Little Dorrit is a clean period drama.

You can buy Little Dorrit on Amazon.

Our romance-themed entertainment site is on a mission to help you find the best period dramas, romance movies, TV shows, and books. Other topics include Jane Austen, Classic Hollywood, TV Couples, Fairy Tales, Romantic Living, Romanticism, and more. We’re damsels not in distress fighting for the all-new optimistic Romantic Revolution. Join us and subscribe. For more information, see our About, Old-Fashioned Romance 101, Modern Romanticism 101, and Romantic Living 101.
Pin this article to read later! And make sure to follow us on Pinterest.
By Mandi Harris on September 3rd, 2015