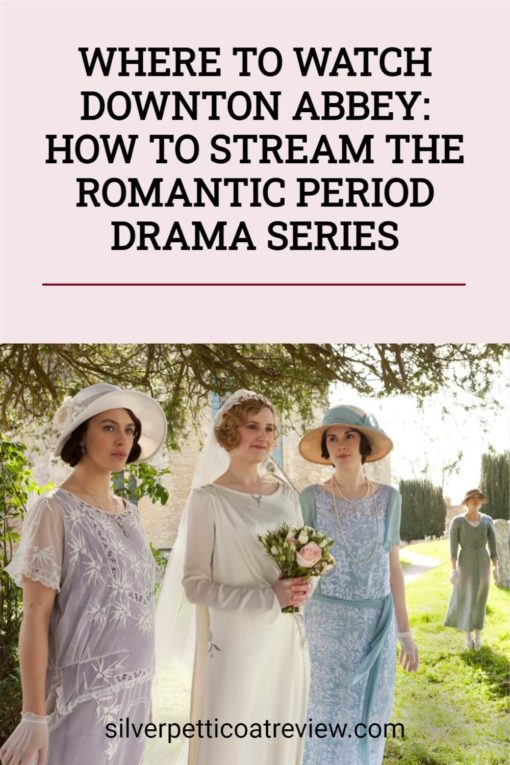 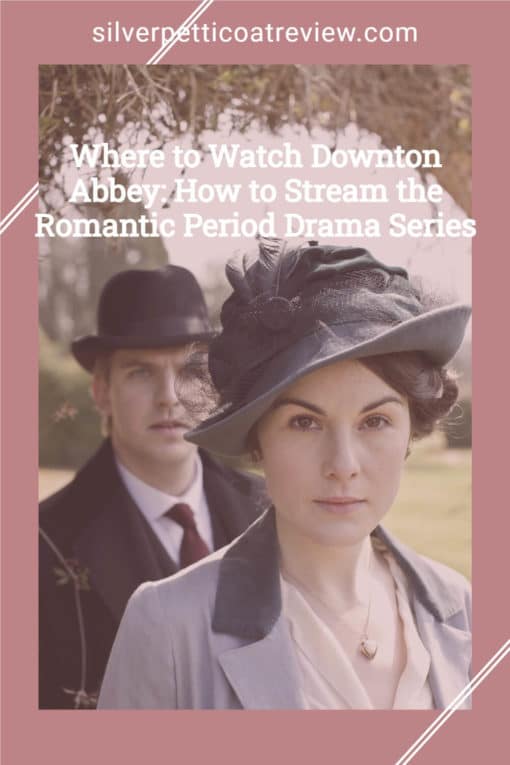 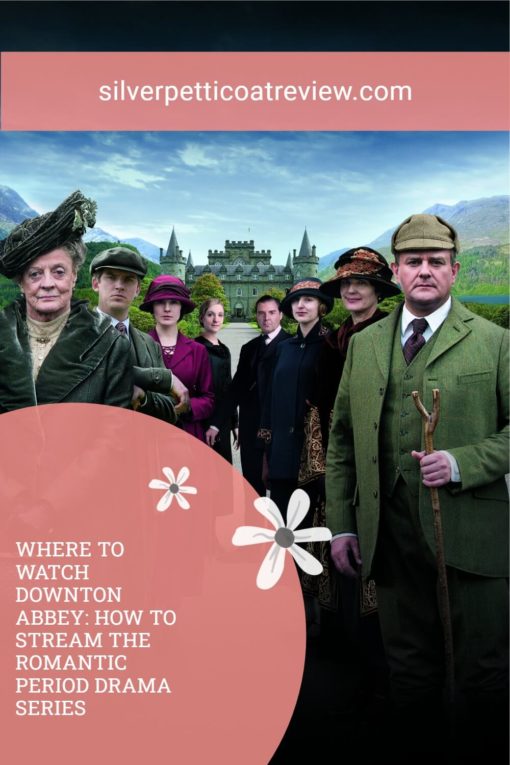 WHERE TO WATCH DOWNTON ABBEY:

FIRST, LET’S GET DOWN TO BUSINESS: IS DOWNTON ABBEY ON NETFLIX?

Sad news, Downton Abbey fans: As of May 31, 2022, it’s no longer streaming on Netflix. We’ll have to keep our eyes peeled to see when or if it returns in the future.

Scroll down for the complete list to find out all the other ways to watch.

Ever since Julian Fellowes’ Downton Abbey first premiered in 2010 on ITV and PBS’s MASTERPIECE in January 2011, the British period drama series has become a pop culture phenomenon worldwide. The TV series aired for six seasons and had a successful movie with a theatrical release in 2019, with another original film that premiered in 2022.

With its popularity continuing for over a decade and rising, now is the perfect time to watch Downton Abbey for the first time (and see what you’ve been missing!) or re-watch what is a comforting series in these difficult times.

The manners, the costumes, the swoony romances, the award-worthy performances, addictive storytelling with solid scripts, the sets (most notably the now recognizable Highclere Castle), and more all make Downton Abbey one of the best series of the 21st century – helping to catapult the period drama genre into the mainstream.

There are six seasons of Downton Abbey and two feature films to date.

If you’re one of the few who hasn’t seen Downton Abbey yet, the series follows an ensemble group of characters living inside the Downton property in early 20th century England.

Downton Abbey starts in 1912 with the disastrous sinking of the Titanic (never a dull moment on this show) – leaving the Downton estate without a male heir after the presumed one tragically dies.

The series then follows the lives of the Crawley family and their domestic servants in an upstairs/downstairs way as they all discover that the Crawley’s distant (and very handsome) cousin they’ve never met is the new heir. Romance, conflict, tragedy, comedy, and compelling stories ensue.

Sound awesome? Well, here is how to stream Downton Abbey. Enjoy the show.

(For more on Downton Abbey, check out our ultimate guide to the series with recaps – beware of spoilers, character descriptions, and more!)

Note: Availability is as of June 2, 2022, in the United States and is subject to change.

WHERE TO WATCH DOWNTON ABBEY: HOW TO STREAM THE ROMANTIC PERIOD DRAMA SERIES

Good news! If you’re a member of Amazon Prime, you already have full access to the Prime Video library, which currently includes the entire Downton Abbey series.

Besides having access to numerous period dramas on Amazon Prime Video (like Poldark and Victoria), you can also use their fast and free delivery service, get some free books, listen to ad-free music, etc.

BRITBOX – GET THE EXCLUSIVE EXTRAS

The best part about choosing Britbox (besides all the other addictive and fabulous period dramas available to watch after Downton) is all the show’s extras and behind-the-scenes footage. It is exclusive to Britbox (and Britbox Amazon Channel), making them the perfect choice to stream Downton Abbey.

If you don’t want to access Britbox through their app, you also pay a monthly fee for the Britbox Amazon Channel, gaining access to numerous British dramas and comedies from the Amazon Prime streaming service.

PBS PASSPORT – BECOME A MEMBER OF YOUR LOCAL PBS STATION

To watch all six seasons of Downton Abbey, you can become a member of PBS Passport, the online streaming service for PBS.

Now, it works a little differently than a regular streaming service because instead of just subscribing, you need to set up a monthly donation (minimum of $5/month) that works as a donation you can list on your taxes.

The service is available on your phones, computers, and smart TVs.

Besides Downton Abbey, there is other great content – including other romantic period dramas like Sanditon and All Creatures Great and Small. If you’re a fan of PBS’s MASTERPIECE, you get to stream episodes early before they release on live TV each week.

You can stream all episodes of Downton Abbey for free on the Peacock app. All you need to do is sign up for a free account with an email address.

Downton Abbey is also available on Peacock Premium (for a fee) if you want access to other Peacock content without ads.

THE ROKU CHANNEL – FREE TO WATCH

All episodes are free on The Roku Channel app – just expect to see some ads.

WHERE TO BUY DOWNTON ABBEY ON DIGITAL STREAMING

If you love the series and would prefer to buy it on Digital rather than depend on a streaming service that changes availability daily, you can currently buy the series here:

WHERE TO WATCH DOWNTON ABBEY MOVIE (2019)

The first Downton Abbey feature film (2019), all about a royal visit, is currently available to stream on HBO Max.

You can also stream it by renting or buying the movie on Amazon Prime Video, Apple TV, YouTube, Google Play, Vudu, Redbox, and DIRECTV.

The cheapest way to watch the Downton Abbey movie depends on if you find it worth using HBO Max or would instead prefer to rent it for a one-time fee.

HOW TO WATCH DOWNTON ABBEY: A NEW ERA (2022) – THE SECOND FEATURE FILM

“From award-winning creator Julian Fellowes comes the motion picture event DOWNTON ABBEY: A NEW ERA. The much-anticipated cinematic return of the global phenomenon reunites the beloved cast as they go on a grand journey to the South of France to uncover the mystery of the Dowager Countess’ newly inherited villa.”

If it’s still in theaters in your neck of the woods, go and check your local movie times to see the new film on the big screen. It’s a wonderful event worth heading to movie theaters for and is a delight from start to finish.

New actors in the sequel film include the always brilliant Hugh Dancy and Dominic West!

Want to own a physical copy for your collection? You can buy the show season by season or purchase the complete series. You can buy the movies separately or as part of a collection with the first film. Check out the photo links below (affiliate links).

What are your thoughts on Downton Abbey? Do you love it as much as we do? Are you excited about the movie sequel? Let us know in the comments below!