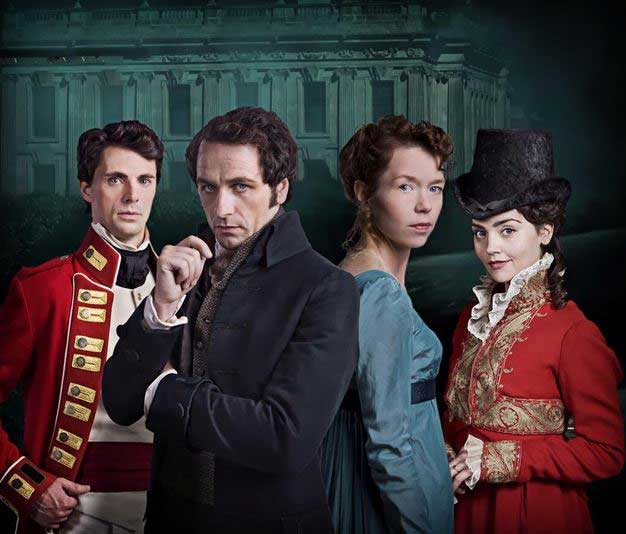 THE MINISERIES: Death Comes to Pemberley

THE SETUP: Six years after the events of Pride and Prejudice, a murder happens at the Darcy’s and Wickham is the main suspect.

The Brits have done it again with their entrancing TV adaptation of P.D. James’s novel. The miniseries is a huge improvement on the not so successful novel that nonetheless had a great premise. All of our favorite Pride and Prejudice characters are back years after the end of Miss Austen’s famous novel, except this time lively balls and house parties have been traded out for a murder investigation and its subsequent trial.

Unlike Austen’s novel, the show relies on special lighting and camera angles to create a darker more haunted feel to the story, including plenty of blood, dead bodies, and gothic suspense.

Wickham is the chief suspect in the murder of Captain Denny, who was murdered in the woods of Pemberley. Unlike Austen’s novel, the show relies on special lighting and camera angles to create a darker more haunted feel to the story, including plenty of blood, dead bodies, and gothic suspense.

Matthew Rhys and Anna Maxwell take their places as Darcy and Elizabeth. While their characterization echoes that of Colin Firth and Jennifer Ehle in the ’95 version of Pride and Prejudice, there is a marked difference in these older versions of the pair. In this continuation we get to see how our favorite characters have changed over the years. Darcy is definitely a changed man. He is much more sensitive and we even see him as an affectionate father figure. Elizabeth is mostly the same, although her performance does not live up to Ehle’s, despite the effort. But, then again, who really could live up that iconic performance?

The Wickhams were definitely my favorite pair in the show. Jenna Coleman is brilliant as Lydia, making her more superficial and vain than ever. Matthew Goode, who I will admit I have had a crush on for a very long time, is the ideal man to play the Don Juan-esque Wickham. He also brings a level of acting that I don’t think has been seen in any other Wickham to date. Goode embodies the character, down to even the minute details in his facial expression that add worlds of meaning and depth to the character.

For period drama and Pride and Prejudice lovers, this is one miniseries you don’t want to miss.

Our romance-themed entertainment site is on a mission to help you find the best period dramas, romance movies, TV shows, and books. Other topics include Jane Austen, Classic Hollywood, TV Couples, Fairy Tales, Romantic Living, Romanticism, and more. We’re damsels not in distress fighting for the all-new optimistic Romantic Revolution. Join us and subscribe. For more information, see our About, Old-Fashioned Romance 101, Modern Romanticism 101, and Romantic Living 101.
Pin this article to read later! And make sure to follow us on Pinterest.
By Rebecca Lane on October 26th, 2014