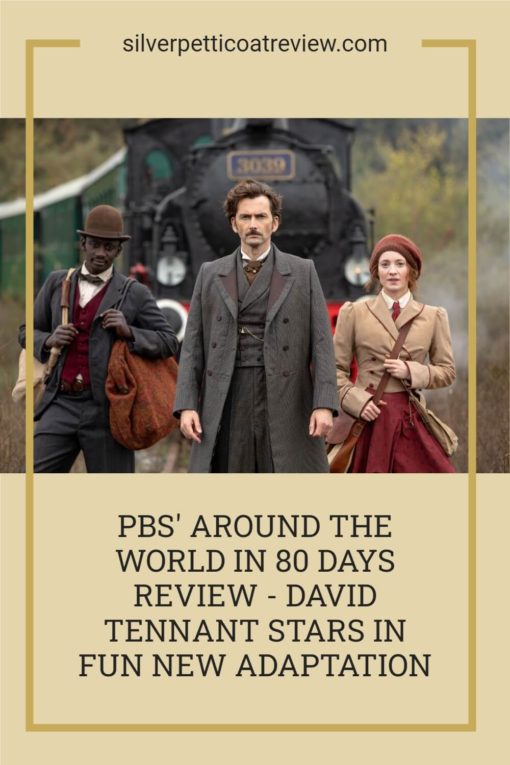 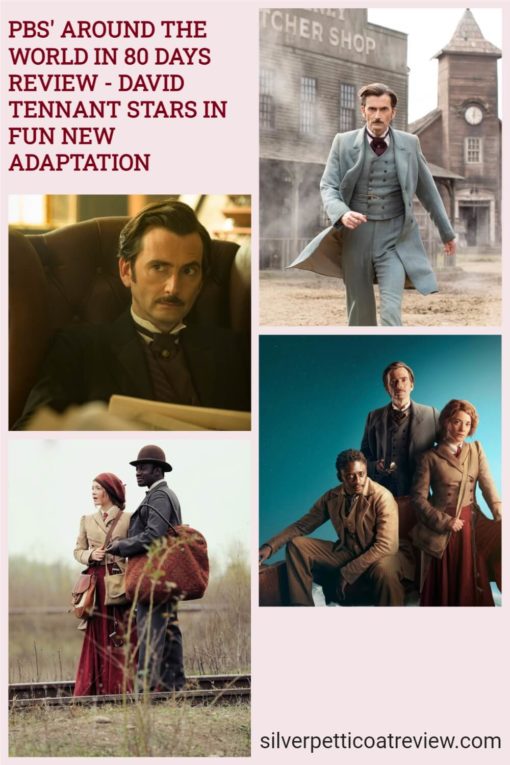 Around the World in 80 Days (2021) Starring David Tennant

David Tennant (Doctor Who, Good Omens, Jessica Jones) is back to charm viewers around the world in the latest (and unique) new version of Jules Verne’s classic adventure novel, Around the World in Eighty Days.

The eight-part series (created by Ashley Pharoah) premiered on BBC1 in December 2021 (Boxing Day), and the first episode premiered on PBS’ Masterpiece on Sunday, January 2nd, 2022. New episodes premiere weekly. (And in a bit of good news, the show has already been renewed for a second season!)

The latest version is an entertaining and fresh modern take on the extraordinary story and will entertain families looking for something both fun and meaningful to watch together.

But before I jump into my review, here is everything you need to know about the new delightful series.

Around the World in 80 Days Official Trailer

To help get you excited for this fantastic new show, here is the official preview from Masterpiece PBS. Yes, the production quality is as stunning as it looks…

Check out the trailer above.

Around the World in 80 Days Story

In the classic tale, David Tennant stars as the courageous fictional adventurer Phileas Fogg attempting to circumnavigate the world in only 80 days. He’s a bit of a timid traveler, tired of his everyday daily routines where nothing happens.

So, when he reads an article about traveling around the globe in 80 days, he finally feels inspired to do something about his dull existence!

Unfortunately, no one takes him seriously, leading to an insane bet at a gentlemen’s reform club. Fogg will have to pay 20,000 pounds to the dastardly and villainous Mr. Bellamy if he loses the seemingly impossible wager.

On his adventure, his new valet (a bit of an irrepressible rascal and mystery), Jean Passepartout (Ibrahim Koma), and Abigail “Fix” Fortescue, an ambitious young journalist who wrote the newspaper article that first inspired Fogg, join him.

Her father also owns the newspaper and isn’t thrilled with her ambitions or decision to travel.

The trio faces crazy adventures traveling to places like Italy, Paris, and Hong Kong. It’s all a bit like Doctor Who; you know, if Fogg were an amnesiac version of the Doctor, unaware that he’s actually an alien timelord with extraordinary abilities. And instead of a TARDIS, there is a hot air balloon (at least in the beginning).

Now, this is not a supernatural fantasy series, but the adventure aspect – told with a lot of emotion and heart – matches the style and tone of historical Doctor Who episodes.

Around the World in 80 Days Cast

Besides David Tennant as Phileas Fogg, he’s joined by an all-star cast, including French actor Ibraham Koma as Passepartout and Leonie Benesch as Abigail.

Around the World in 80 Days Review

There is something rather inspirational about this adaptation. Watching, you feel it’s never too late to reach for your dreams. And that no matter how others judge you, you can find your true strength and shine.

It’s all very romantic and uplifting but fun despite some underlying sadness to the characters and their circumstances.

RELATED: Lucille and Cyril from Call the Midwife – A Lovely and Meaningful Proposal

While some might complain about the changes from the novel, such as adding Abigail as a character to the series (she is not in the book) – I think the changes are inspired and fitting for a modern audience.

Journalist Abigail Fix is based on the real-life journalist Nellie Bly, who, inspired by Verne’s novel, traveled around the globe and wrote about it in 1890.

She wanted to prove it was possible. And she did – traveling around the world in 72 days. She even met Jules Verne during her travels!

Adding the Nellie Bly-like journalist, while reaching beyond the words on the page, feels true to the spirit of adventure the book inspired in so many – including the famous journalist.

David Tennant is, of course, perfection in the role. He brings humanity and heart. Fogg is a depressed character who decides to try and live again! It’s courageous.

Tennant is, as always, a charismatic lead actor and is made for the role, bringing out the depth of the character in new ways.

Besides the strong cast and acting, the script is polished, the characterization just right, and the production quality epic.

In a surprise move, the Oscar-winning composer Hans Zimmer even composed the central theme – and it is gorgeous.

Around the World in 80 Days is an epic production with a big budget from the costumes to the set designs, the locations around the globe, everything is grand! And that makes it absolutely fun to watch.

Overall, Around the World in 80 days is an engaging romp that I can’t wait to keep watching! I have not seen every episode yet, so I don’t have thoughts on potential romances yet, but it’s one of my favorite new series, and I look forward to seeing how the entire season plays out.

While purists may complain, I think the show captures the book’s spirit and is likely to capture the hearts of viewers around the globe in this new year.

It may even inspire a new generation of adventurers or anyone really to reach for their dreams. It never is too late to go on your own adventure of a lifetime, after all.

How to Watch Around the World in 80 Days

In the UK, you can watch the series weekly on BBC1 or the BBC iPlayer.

In the US, the show airs weekly on Sundays on PBS’s Masterpiece at 8/7c, or you can stream it on PBS Passport or the PBS Masterpiece Amazon Channel.

You can also stream it for free on PBS.org.

The series is available to buy on Digital (although you’ll have to wait for all of the new episodes to air before you can binge-watch it).

Have you watched any of Around the World in 80 Days starring David Tennant yet? What do you think of the new period drama? Do you like it as much as I do? Sound off below.