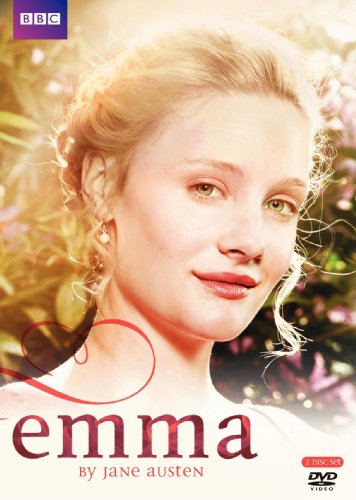 It’s been six years since I first sat down to watch BBC’s most recent adaptation of Emma. Ironically, that inaugural viewing was I believe, around the same time of year I sat down to watch it again this month. (In those six years since watching this adaptation, this is only my second viewing.) While a second viewing didn’t damper my appreciation or take away from the charm that is Jane Austen, there was a certain commentary of criticism running through my mind as everything unfolded.

Though everyone is sure to be familiar with the story of Emma, let’s go through the players regardless. There is the wealthy and young protagonist, Emma Woodhouse (Romola Garai) whose sole purpose in life seems to be playing cupid to her circle of country friends. As is widely known, Emma intends to never marry. She needs no fortune and her position in society cannot very well exceed what she has now. Instead, she prefers caring for her father (Michael Gambon) and meddling in the lives of her closest neighbors. Entangled in the lives of the Woodhouse’s is Emma’s beloved governess, Mrs. Weston (Johdi May); the newly returned Frank Churchill (Rupert Evans) and Jane Fairfax (Laura Pyper); Emma’s new friend Harriet Smith (Louise Dylan); Mr. Elton (Blake Riston), the proud minister; and neighbor Mr. Knightley (Jonny Lee Miller).

As wonderfully romantic as this is, there are some faults I wish had been polished. The cast is sure to read like a who’s who list of talented British talent, but I have to confess I wasn’t terribly fond of how Romola played the iconic character of Emma. In comparison to her predecessors, she plays her with almost a… daft wit that’s so unlike the Emma I anticipated. I don’t mind her softening Emma (in comparison to Kate Beckinsale’s stiff upper lip or Gwyneth Paltrow’s coy elegance), but Romola also plays her with too much childish enthusiasm. Fortunately, as the miniseries progresses, she does improve on this as is indicative of her character maturing. Which is perhaps the intent of the writer and for that, I do have to admire the progression. My final complaint would be some of the styling or mannerisms. Some of the clucky manners just don’t fit with the period or my ideal vision of it. That being said, I have plenty of rave remarks to share. 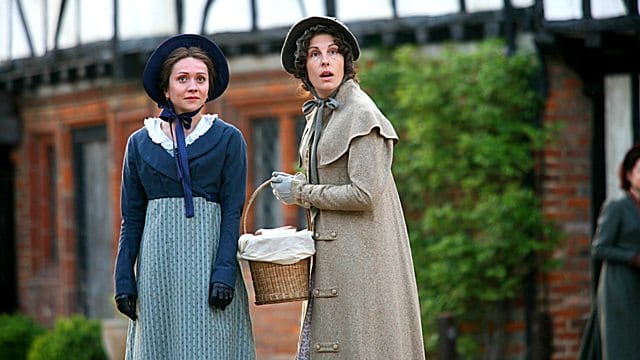 For exploration and depth, this miniseries has the edge. Because it tells the story in four hours versus two or under, it has the extra benefit of thoroughly examining the characters’ motives and people in Emma’s world. We see more of Miss Bates’ difficult and lonely life, for example, and there is a more sympathetic view of an innocent Jane Fairfax. The script also digs into Knightley’s head for a more personal touch on what makes him tick. Jonny Lee Miller is perhaps not everyone’s ideal and yet he’s quite brilliant as Knightley. The interplay between he and Emma isn’t as witty, but there is something special about the chemistry between Miller and Garai. And the ending of this series? It’s positively darling. 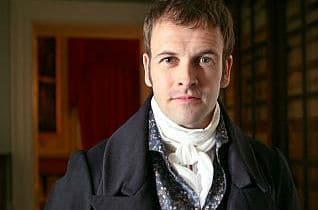 Though I do often compare Austen adaptations, I really don’t like judging this adaptation in a side-by-side kind of comparison to the feature films. More fairly would be to compare it to the ’80s adaptation from the BBC, which this far surpasses. I enjoyed the gorgeous settings and the smaller (in scale) atmosphere of the parties or estates. There is a wonderful, innocent kind of whimsy to this script, which despite my petty complaints, enchants. The cast is largely well put together and simply because this runs longer I felt more satisfied with the story it had to tell. Everything gets the time it deserves and the story is able to ensure it gives every detail that extra attention. But of course, the biggest reason I hold this adaptation in such high esteem is simply for the fact of seeing Mr. Knightley, who is, in my opinion, Austen’s best.

Emma is available to purchase on a 2-disc DVD set or to stream on Amazon’s Instant Video service and rent on Netflix.

Have you seen this, the latest adaptation of Jane Austen’s Emma? Comment down below with your impressions; I would love to read them.

Our romance-themed entertainment site is on a mission to help you find the best period dramas, romance movies, TV shows, and books. Other topics include Jane Austen, Classic Hollywood, TV Couples, Fairy Tales, Romantic Living, Romanticism, and more. We’re damsels not in distress fighting for the all-new optimistic Romantic Revolution. Join us and subscribe. For more information, see our About, Old-Fashioned Romance 101, Modern Romanticism 101, and Romantic Living 101.
Pin this article to read later! And make sure to follow us on Pinterest.
By Rissi JC on October 15th, 2015