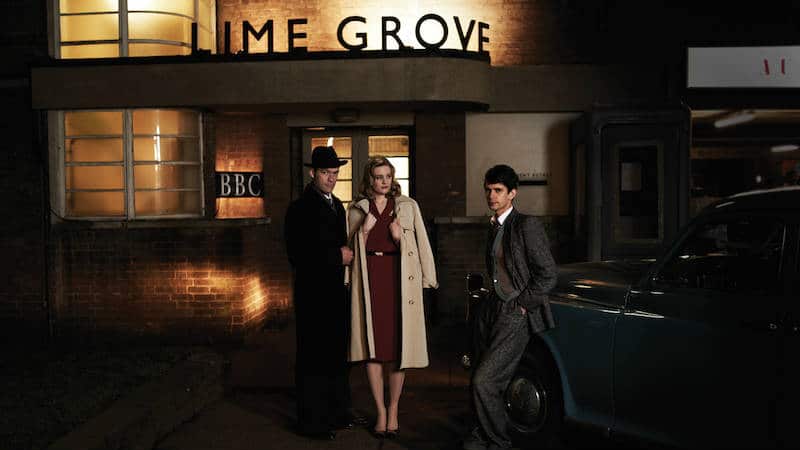 THE SHOW: The Hour

The Hour is one of my favorite shows, and in my opinion, one of the best shows of the last decade. The acting is superb, and the writing is excellent. It’s a shame that there are only two seasons. The chemistry between Romola Garai and Ben Whishaw is fantastic; when you’re watching the show, you can easily believe that they’ve been friends forever.

The first season of The Hour is well-executed and bears re-watching to catch all of the nuances in the writing. Set in 1950’s London, Bel Rowley and Freddie Lyon are best friends and journalists. At the start of the first season, they’re both working at a dead-end job producing newsreels. Bel, however, gets a break when she lands a job producing a new show for the BBC, The Hour. Bringing together a rag-tag team, it includes Lix Storm (Anna Chancellor) for the foreign desk, Thomas Kish (Burn Gorman) who helps with translations, Issac Wengrow (Joshua McGuire) who acts as a go-between for departments and Freddie’s assistant, Sissy Cooper (Lisa Greenwood). Bel’s assistant, and at the head is Clarence Fendley (Anton Lesser), a mentor to both Bel and Freddie. The face of The Hour is Hector Madden (Dominic West), charismatic and handsome, but with less experience than Bel and Freddie.

Against the backdrop of the Suez Crisis, Bel and Freddie struggle to provide coverage to their audience, with pressure from the government, especially Angus McCain (Julian Rhind-Tutt), to show a less violent version of the events unfolding. Coupled with this, is a request from Ruth Elms, a debutante and an old friend of Freddie’s. She asks him to look into the murder of Peter Darrall, and unfortunately, soon after, she, too, is murdered. As the events at the Canal turn more complicated and chaotic, Bel and Freddie find the conflict hit even closer to home than they expected.

In this episode, Bel and Freddie have been invited to Hector’s in-laws for the weekend by Hector’s wife Marnie (Oona Chaplin). Freddie is unhappy about this, but it allows him to get closer to the actor Adam Le Rey (Adam Scott), Ruth’s former fiancee, who is also invited, and whom Freddie suspects may have had some sort of involvement with Ruth’s death.

The episode begins with the group at a taping for one of Adam’s shows, The Man Who Knew. Things are tense at The Hour since ratings have not been as good as hoped. At the after party for The Man Who Knew, Marnie invites Bel and Freddie to the country, to stay with her and Hector at her parents’ estate, thinking that maybe everyone needs a weekend away from work.

Hector and Bel have already had a few flirtatious moments, but with Marnie around, Hector is keeping things civil. Freddie slips out of the after party, to catch Thomas Kish, and confront him about a film Freddie managed to see that has Mr. Kish, Ruth, and Peter together. Mr. Kish proves elusive, and his answers only give Freddie more reason to suspect his motivations. Freddie runs into Isaac and asks him to keep an eye on the film that has Ruth with the two men at a party on it.

The next day, Bel and Freddie ride up with Hector to the estate. As Freddie writes in the backseat, working on the Ruth story, Hector says that he’s surprised that they were able to convince Freddie to come out to the country with them. Off-handedly, Hector also says that one of his past girlfriends was a debutante, like Ruth, one for whom he wrote plenty of terrible poetry. Bel mentions that she’s never been sent poetry, to which Freddie retorts, “Yes, you have,” and proceeds to recite part of an e.e. cummings’ poem. When he can’t remember the final line, he turns on the radio.

When they get to the estate, Marnie shows Bel and Freddie to their rooms, saying, “I wasn’t sure if you were together,” indicating that she thinks there is more to Bel and Freddie’s relationship than they let on. Bel tells her that there was no need to put her and Freddie’s rooms near each other. Marnie introduces her brother, Ralph (Ben Lloyd-Hughes) and Bel and Freddie are amused at the two siblings bickering.

Bel and Freddie are laughing at the absurdity of the events of the weekend — which are so different than what they normally do — and are surprised to discover that Angus has come along for the weekend. Freddie calls Isaac to check up on the film and is in for another surprise when Isaac tells him that Mr. Kish is working in the office as well. Freddie tells Isaac to not let Mr. Kish out of his sight.

At lunch, Freddie is seated next to Adam and tries to get information out of him about Ruth. Angus tries to get Freddie to leave Adam alone, and the conversation turns to the Suez Canal. Freddie and Angus argue about the government’s involvement in the crisis, and Marnie tries to steer the conversation to less controversial topics. After lunch, the men head out to shoot, while the women stay inside and dance. Hector and Freddie briefly discuss Adam, and Hector indicates that Freddie will see that there is more to Adam than he’s letting on.

There is a brief moment between Hector and Bel but Bel doesn’t let it last, as Marnie is standing nearby.

Angus and Freddie bicker again over the government’s position in the Suez, which leads to an argument between Bel and Freddie. Bel didn’t show a film with Lord Elms, Ruth’s father, on a previous episode of the show, for fear that they would get in trouble with the BBC. Freddie is frustrated, and storms out of Bel’s room.

Freddie checks in with Isaac, who is still at the office. As Freddie is in the bathroom, talking to Isaac, Bel comes in to borrow toothpaste, and Marnie catches Bel leaving Freddie’s room. She sees Freddie in the tub and awkwardly covers. Freddie tells Isaac to make sure Mr. Kish doesn’t leave the office, as Bel comes back to apologize over the Lord Elms film. Things are sorted out, and they head to dinner.

Marnie mentions to Hector that she saw Bel leaving Freddie’s room, and Hector seems off-put by this information but brushes it aside quickly. When Hector sees Freddie in the hall wearing a frumpy suit, he gives him a tux to borrow. The action jumps back to the office, where Mr. Kish has been waiting all day to be left alone, where he rummages through Freddie’s desk. When Isaac happens upon him, he leaves in a hurry.

Back at the estate, Adam has gotten himself into a drunken stupor, and starts spouting off that he only agreed to marry Ruth as a cover, because Ruth was “in trouble.” Freddie and Hector leave Adam and discuss what happened when some of the other guests interrupt them.

Hector leaves Freddie and finds Bel, who is playing a game of sardines with the other guests. They give into temptation, their scenes juxtaposed with Freddie intent on figuring out what the information that Adam said means in the grand scheme of things.

THE ROMANTIC MOMENT – BEL AND FREDDIE

Freddie hears Bel go back to her room, and he comes over. Her mind is preoccupied with what happened between her and Hector. Freddie asks her, “Why would you marry someone you didn’t love?” He’s obviously still talking about Ruth and is all worked up. Bel tells him that he needs to sleep. When he tries to lay down on her bed, she kicks him and says, “Not with me.” He laughs, then pauses, and turns serious.

Freddie recites the last stanza of the poem he started in the car earlier, somewhere i have never travelled:

“(i do not know what it is about you that closes/and opens; only something in me understands/the voice of your eyes is deeper than all roses)/nobody, not even the rain,has such small hands.”

Bel listens to him, and when he ends the poems, she says, “e.e. cummings.”

Freddie responds, “That’s the one,” and leaves.

As Bel thinks, you can almost see the wheels turning in her head about the potential consequences of her actions with Hector, and about Freddie’s true feelings about her. The moment is quiet, but poignant, and speaks volumes about Bel and Freddie’s past, and what their future could be. Freddie’s recitation of the poem is so much more than Hector’s action of seducing Bel and carries more weight. Freddie has to travel back home early to help his father, as their flat has been broken into, and there is an explosive ending between him and Mr. Kish. Hector confronts Bel about what their relationship will be moving forward. This particular episode is more romantic than the others in this season, but the whole series is so intriguing, you’ll want to watch all of it (six episodes in the first season and six in the second) in one sitting! The remainder of the season reveals what happens between Bel and the two men, as the events at the Suez Canal break and captivate the entire country.

I adore this show and recommend it to anyone who wants a smart series with wonderful writing, great costumes, and outstanding acting.

The Hour is available on DVD and is also available to download on iTunes and Amazon Video.

Our romance-themed entertainment site is on a mission to help you find the best period dramas, romance movies, TV shows, and books. Other topics include Jane Austen, Classic Hollywood, TV Couples, Fairy Tales, Romantic Living, Romanticism, and more. We’re damsels not in distress fighting for the all-new optimistic Romantic Revolution. Join us and subscribe. For more information, see our About, Old-Fashioned Romance 101, Modern Romanticism 101, and Romantic Living 101.
Pin this article to read later! And make sure to follow us on Pinterest.
By Clarissa Hadge on March 31st, 2016