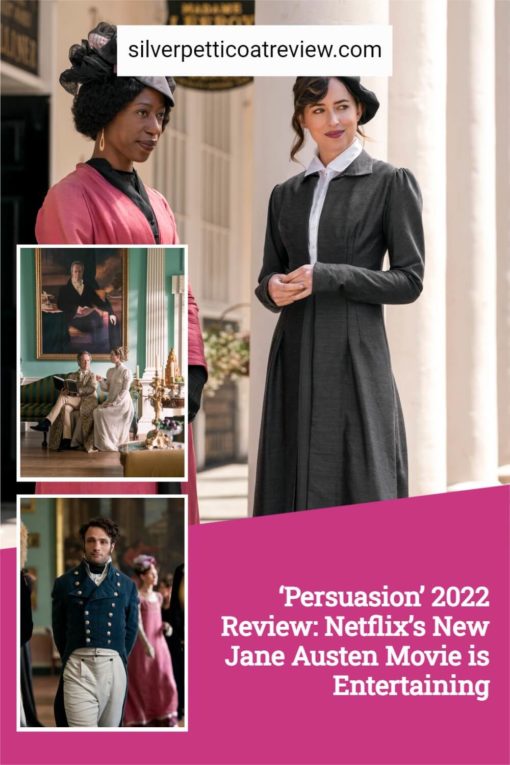 I had high hopes for the new Netflix adaptation of Jane Austen’s Persuasion. While the trailer produced a polarizing reaction from the Austen fandom, I enjoyed it thoroughly – despite the alterations to Anne Elliot’s personality from the classic (and beloved) novel.

Having now seen the new 2022 version of Persuasion, unfortunately, it’s not as good as either of those two movies. It sometimes suffers from poor dialogue, a few strange plot and directing choices, not to mention the almost complete transformation from the quiet but strong Anne of the books to the extroverted, flirty (perhaps alcoholic?) found in the film.

But that doesn’t mean this Persuasion is without merit, even if it’s not the artistic masterpiece I hoped it would be. Nor is it as awful as many critics claim. It’s not the worst film of the year, nor does it do a disservice to Austen.

Austen belongs to everyone, and each generation is introduced to her in new ways. This Persuasion is just one version and does not detract from the novel.

The director, Carrie Cracknell, clearly respects Austen – as do the screenwriters, Ron Bass and Alice Victoria Winslow – even if I don’t wholly agree with all their creative choices.

All in all, it’s a very entertaining romance movie with a refreshingly inclusive and brilliant cast with a few genuinely funny scenes.

So, if you approach this Persuasion as a modern interpretation of Austen, much like Anne with an E was to Anne of Green Gables, and appreciate it as more of a rom-com than an introspective adaptation faithful to the essence of Jane Austen’s final novel, then you may enjoy this attractive-looking period piece.

I certainly did, despite the departures from the source material.

THE STORY OF NETFLIX’S PERSUASION

The beats and plot points of the Netflix adaptation closely resemble the novel (even if the tone is drastically different).

27-year-old Anne Elliot, a single woman in the early 19th century, lives with her snobbish family as they are on the brink of bankruptcy due to their continuous poor financial decisions.

On the other hand, Anne spends much of her time reminiscing and regretting her past decision to break off her relationship with naval officer Frederick Wentworth, a young man she still loves.

But he had no money or status, and so she was “persuaded” by her friend, Lady Russell (Nikki Amuka-Bird), to turn him down.

Eight years after she ended things, Captain Wentworth re-enters her life, awakening old feelings. But is it too late for them to have a second chance? Or should she move on and marry the rakish Mr. Elliot (Henry Golding)?

WHAT THIS PERSUASION DOES WELL

What Persuasion does well is introduce a younger Tik-Tok/Instagram audience to Austen in an entertaining, easy-to-digest way. It’s also beautiful to look at on the screen.

The production design, the exquisite set decoration, the gorgeous costumes, and the music score are all top-notch.

The new Persuasion also shines with the casting choices of the supporting players. The inclusive cast brings a refreshing feel to Austen – like Bridgerton or the brilliant Mr. Malcolm’s List.

While Dakota Johnson and Cosmo Jarvis are fine in their parts, the supporting cast steals the show. Henry Golding (Crazy Rich Asians) plays the rakish Mr. Elliot with charm and shocking likability.

He’s so flagrantly up to no good that he’s fun to watch. And his onscreen charisma and absolute perfection within a period drama setting make me want to see him as a romantic lead in another period drama as soon as possible!

The other significant standouts include the great Richard E. Grant portraying the foppish father of Anne, Sir Walter Elliot, with gusto, Mia Mckenna-Bruce as Anne’s narcissistic (but hilarious) sister, Mary Musgrove; Nikki Amuka-Bird as the clever and worldly Lady Russell, and Nia Towle as the sweet Louisa Musgrove.

Amuka-Bird, Grant, and Golding elevate what is sometimes a weak script to higher levels. Their scene-stealing performances make watching this Persuasion worth it – even if you don’t appreciate the modernism in the film.

WHAT COULD BE BETTER

Perhaps this comes down to personal taste, but a few of the script and directing choices weren’t my cup of tea.

Some of the modern dialogue choices were irritating, and at times, terrible. “If you’re a 5 in London, you’re a 10 in Bath,” to the use of “playlist,” etc. Austen’s period dialogue felt lost – thus taking away some of the story’s power.

The modern approach is almost vulgar, like Anne going to the bathroom outside by a tree. And don’t get me started on the bizarre octopus dream Anne shares with everyone.

The script also suffered from too much exposition – telling more than showing – signs of a script needing a rewrite.

Now, I don’t mind modernism in period dramas as there are numerous types of period dramas. However, this movie couldn’t quite figure out what it wanted to be.

It’s stuck somewhere between the 21st and 19th centuries and never finds the right balance between comedy and drama. And there are a few truly terrible moments (like the octopus scene) in the film and a few awkward camera shots.

I also didn’t love the characterization of Anne. She was unrecognizable as a character. Not only is she extroverted in this adaptation (she’s introverted in the novel), but she’s openly flirty, loves to drink alcohol, and is much whinier.

I prefer the book Anne, a quiet character who has been muted by the mistreatment of her family and society but also has an inner strength.

As the leading lady, Dakota Johnson remains likable, but she doesn’t match the book’s character. Arguably, that was the intent, but I was not too fond of that change.

I also felt the romance was a little underwhelming. We lost some of Wentworth’s emotion by focusing entirely on Anne’s perspective to the point of ad nauseam (breaking the fourth wall is fine, but it was constant and sometimes grating). So, I didn’t feel true love as much as I had in past adaptations.

Was it still romantic? Yes. But even the famous letter scene with Wentworth was chopped up to focus more on Anne. And that detracted from what could have been a stronger love story.

All in all, Captain Frederick Wentworth is relatively thin on the page. He’s not as layered as a character or as interesting. Jarvis is fine, but the writing and directing didn’t do him any favors.

Overall, if you’re a Jane Austen purist, this 2022 version of Persuasion likely won’t be to your taste. However, if you go in with an open mind and try to enjoy the film separately from the book, the movie might entertain you – modern sensibilities and all!

While it’s not nearly as good as Bridget Jones or Clueless, it’s still a fun watch and a handsome film overall from an aesthetic perspective.

This Persuasion will surely be a polarizing adaptation of Jane Austen for years to come. And as strange as this film is, it is, at the least, entertaining to watch. Plus, it has a brilliant inclusive cast, a trend I hope will continue in the period drama genre.

Plus, personal taste aside, as long as this version of Persuasion introduces new fans to Austen, I’m all for it.

Still, if you want to watch a closer version of the Jane Austen classic, watch the 1995 version with Ciaran Hinds and Amanda Root or the 2007 adaptation with Sally Hawkins and Rupert Penry-Jones.

What did you think of the 2022 adaptation of Persuasion? Are you a fan or not? Or were you like us and fell somewhere in the middle? Let us know in the comments!