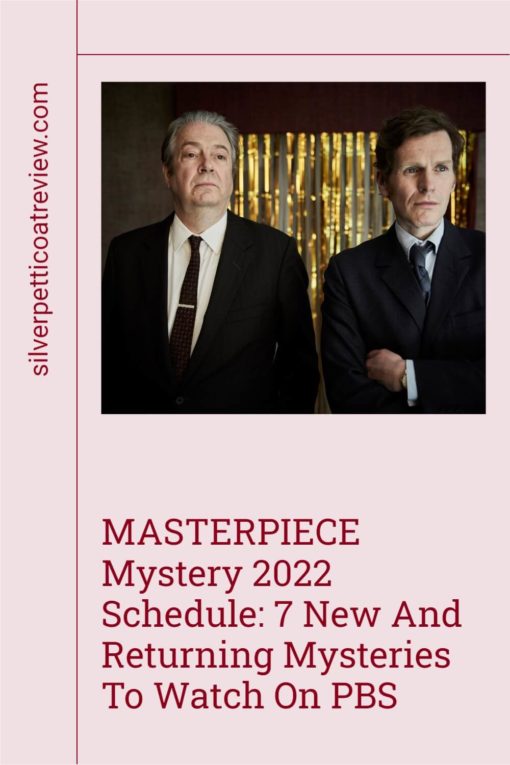 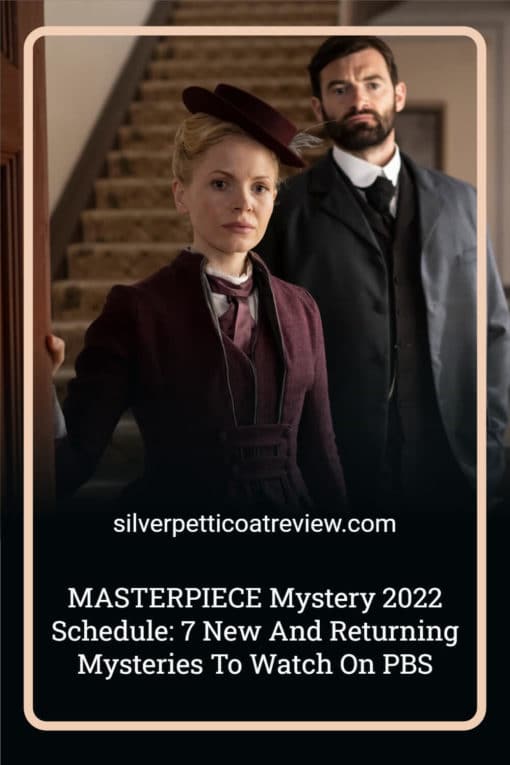 PBS’ MASTERPIECE Mystery is returning in 2022 with an entirely new season of mysteries with something for every type of palate. They’ve got cozy, gritty, British, period, romantic. Some are returning favorites while others are brand-new!

So, if you’re wondering when your favorite mystery show will return or what new mysteries MASTERPIECE Mystery has to offer this year, we’ve got the complete list below with premiere dates and how to watch.

In total, MASTERPIECE will air seven mysteries this season, and they all look fantastic. We’re particularly excited for the second season of Miss Scarlet and the Duke.

Based on the new trailer, it looks fantastic – and even more romantic than the first season. Let’s all just swoon now.

(In Order of Premiere Dates)

The beloved British mystery series about the solitary Detective Constable Morse returns with three exciting new episodes, the first premiering on Sunday, June 19, at 9/8c on PBS (your local station). It will also be available to stream on the PBS Passport streaming app.

And if you don’t want to wait to watch new episodes on PBS weekly, PBS Passport will have all three episodes of Endeavour ready to binge on June 19.

Season 8 picks up in February 1971 after the tragic events from season 7, digging deeper into Morse as a character and his everyday life as he continues to solve new complex cases and repair his friendship with his mentor, Fred Thursday.

If you’ve yet to watch the brilliant period drama, you can watch the first seven seasons on PBS Passport, Prime Video, and the PBS Masterpiece Amazon channel.

Will There Be a Season 9 of Endeavour?

Yes! Unfortunately, however, season 9 will be the final season, so enjoy the show while you still can. But at least it will have a proper ending.

The popular drama series, Grantchester, has six all-new episodes airing on Sundays at 9/8c on PBS between July 10, 2022, and August 14, 2022. It will also be available to stream on PBS Passport.

Grantchester, Season 7 takes place during the summer of 1959 as the lovable vicar-detective-duo, Will and Geordie, continue to solve murders in their cozy English village.

Expect lots of romance, murder, and laughter this season, with Will representing the life of a clergyman in unique ways. Wedding season will also happen to be in full swing, so that’s fun!

Call the Midwife fans will be happy to see Charlotte Ritchie (aka Barbara) in a significant role this season. She may even be a potential love interest based on the sneak peek in the trailer.

You can watch previous seasons of the historical drama on PBS Passport, PBS Masterpiece Amazon Channel, and Amazon Prime Video (although prime only has the first five seasons).

If dark comedies and Scottish mysteries are more your speed, you’ll be happy to know Guilt is back for a second season on MASTERPIECE (with four all-new episodes) – premiering on Sunday, August 28, 2022, at 9/8c on PBS.

Guilt will also be available to watch on PBS Passport.

Season 2 picks up two years after Season 1 and is full of revenge and dark humor. Mark Bonnar and Emun Elliot (The Paradise) return with “new episodes full of twists, turns, and deception.”

New cast members include Phyllis Logan from Downton Abbey and Sara Vickers from Endeavour. Guilt is an excellent show for a modern audience looking for a mystery with a touch of black comedy.

Van der Valk will also be available to stream on PBS Passport.

Marc Warren (from the drama Beecham House) returns as detective Piet Van der Valk as he and his team solve crimes in contemporary Amsterdam. Van der Valk has a political angle and some humor – just don’t compare it to the original as this is a remake with its own take on the material.

MISS SCARLET AND THE DUKE, SEASON 2

One of our favorite shows, the romantic period mystery, Miss Scarlet and the Duke, finally returns to MASTERPIECE for Season 2 with thrilling six all-new episodes on Sunday, October 16, 2022, at 8,7c.

“Go on the case with private eye Eliza Scarlet, Victorian England’s first-ever female sleuth, as she solves crimes – and sometimes flirts – with her partner and childhood friend, Detective Inspector William “The Duke” Wellington.”

The will-they-won’t-they detective duo return for season 2 in new episodes set in Victorian London. The private detective and young woman Eliza Scarlet (Kate Phillips) and The Duke (Stuart Martin) continue to compete against each other for cases – unless they’re teaming up!

Watch as their relationship “delightfully and maddeningly simmers on.” Could Eliza’s childhood friend become something more? The new season about the popular female detective is sure to be just as good as the first season!

Could true love be heading their way? Oooh, we can’t wait to find out!

The first season was a massive hit for PBS, with almost eight million viewers watching! So, it will be interesting to see how season 2 fares. If you love powerful women and a simmering romance like Miss Fisher’s Murder Mysteries, then this is the show for you.

For more season 2 details, check out Miss Scarlet and the Duke Season 2: Everything We Know So Far.

“A beguiling murder mystery with a solution that will both astonish and shock viewers, the plot of Magpie Murders revolves around the character Susan Ryeland, an editor who is given an unfinished manuscript of author Alan Conway’s latest novel, but has little idea it will change her life.”

Award-winning actress, Lesley Manville, stars as Susan Ryeland in this 6-part adaptation of Anthony Horowitz’s bestselling novel. You may recognize Horowitz from his numerous bestselling novels or even from his popular TV series, Foyle’s War!

In this dual timeline story (the present day and the 1950s), Susan is thrust into an unexpected mystery case.

RELATED: North and South (2004) Review – A Look Back at One of the Best Period Dramas of All Time (This is the best television limited series ever!)

Nicola Walker (MI-5, Unforgotten) stars in Annika, a brand-new series. It’s a police procedural with wit and premieres on Sunday, October 16, at 10/9c on PBS.

In a surprise twist, you can actually watch all six episodes on PBS Passport and the PBS Masterpiece Amazon Prime channel right now – months in advance of its TV premiere.

Watch the above preview for a sneak peek at every seven of the new or returning mystery shows. Mystery fans are in for a treat this year.

What mysteries on MASTERPIECE Mystery do you plan to watch? Do you have a favorite or a new one you’re especially excited about this year? Let us know in the comments below.

WANT MORE OF MASTERPIECE OR CLASSIC ADAPTATIONS? CHECK OUT THESE RELATED ARTICLES:

Cranford (2007): A Gem of a Period Piece on Community (Amazing actresses like Judi Dench, Imelda Staunton, Francesca Annis star in this story about generations of women!)

Poldark TV Review – A Romantic Period Drama To Swoon Over (See Aidan Turner as the Byronic Ross Poldark in this epic drama.)

The Woman in White (2018) Review – A Mystery Shrouded in Darkness

To Walk Invisible: The Brontë Sisters – A Bleak Yet Wonderful Biopic

The Durrells in Corfu (2015), Series One – ITV’s Zany Biographical Comedy (Keeley Hawes stars in this delightful series set on a Greek Island!)

Mrs. Wilson: A Gripping, Psychological Mystery You Need To Watch

‘Beecham House’ Review: This Is Why You Should Give It a Chance

The 25 Best BritBox Shows with Romance to Stream Right Now

And so many more period drama and mystery articles!

4 thoughts on “MASTERPIECE Mystery 2022 Schedule: 7 New and Returning Mysteries to Watch on PBS”