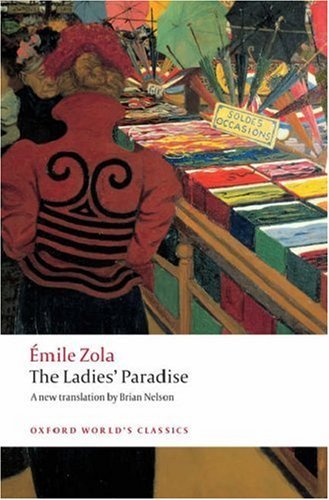 The Ladies’ Paradise is a compelling story of ambition and love set against the backdrop of the spectacular rise of the department store in 1860s Paris. Octave Mouret is a business genius who transforms a modest draper’s shop into a hugely successful retail enterprise, masterfully exploiting the desires of his female customers and ruining small competitors along the way. Through the eyes of trainee salesgirl Denise we see the inner workings of the store and the relations and intrigues among the staff, human dramas played out alongside the relentless pursuit of commercial supremacy.

Now adapted for BBC Television and given a British setting in The Paradise, Zola’s novel is a masterly portrayal of life in the bustling, gossipy world of the best department store in town.

Before the BBC production of The Paradise, a loose adaptation if there ever was one, I had never heard of Emile Zola or any of his Rougon-Macquart series (this being number 11)  but I was intrigued enough to go back to the original source. As drastically unalike as The Ladies Paradise is from the series, I was not disappointed. In fact, this is one entrancing read I recommend to classic literature enthusiasts in search of something a little more obscure to read than the typical choice of Dickens or one of the Bronte sisters.

Before you delve in, however, I warn that this is not a pretty story about a wonderful romance of a shop girl that falls in love with the head of this immense enterprise. No, this is more a dark representation of 1860’s Paris, the horrible working conditions of the time, ambition, and the exploits many of these characters undertake.

Mouret, for example, is not as much of a romantic figure as the English Moray portrayed in the TV adaptation. While a charmer in the latter, Mouret is much more of a womanizer and just a plain cad in Zola’s original version. Denise does come in and change him (like in the way she refuses to sleep with him) but she has her work cut out for her.

Zola captures humanity like a master, reaching deep within the souls of his characters.

While gloomy and depressing at times (with many side characters that reach tragic ends based on their own horrible choices), there is much to love here. The characters are richly drawn and leap off the page as if they had truly lived in this time. Zola captures humanity like a master, reaching deep within the souls of his characters.

There are no clichés for instance. These people just seem like true, living and breathing souls walking down the street. The horrors Denise must endure once her Uncle turns her away are horrifying. (He is NOT loveable in the original and also has a family with enthralling stories of their own.) Then later when she is fired (unbeknownst by Mouret who holds a strong affection) from the store, is uncomfortable to read because her life is difficult as she struggles from one challenge to the next.

She also works hard to take care of her brothers (a plot point dropped in the TV series) that I think one would have to be heartless to not root for Denise to reach a happy end. The selfishness of one of her brothers is particularly infuriating to read.

As for Mouret, what I loved about him is that he makes for a charismatic Byronic figure not given much recognition (See our article on Byronic Heroes in Film). Mouret is most certainly not comparable to one of Austen’s romantic leading men but he is compelling (in all of his ruthless ways) and his love story with Denise is equal to the TV series even though they are two separate entities for sure.

As Mouret slowly transforms into a better man, I found myself rooting for a happy ending between Denise and Mouret because not every love story needs to be sugary sweet. Sometimes, those dark characters that fall for someone with lightness in them just draw you in. (I confess to this weakness.} This is a great illustration of a story using that kind of romance and making it work with ease.

While nothing like the TV series, I would most definitely recommend The Ladies’ Paradise because the writing and the characterization are simply wonderful; the story entirely gripping from Zola’s first page to the very last word. Nevertheless, if you prefer more light-hearted fare, it might be best to stick with the also fantastic TV series and leave it at that.

Outside of the well-written TV series, this would make a great film or mini-series that follows the book more closely, one similar to something like Les Miserables but without the music. This is one book that is meant to be adapted. If Pride and Prejudice can have endless adaptations, I would love to see at least one more for The Ladies’ Paradise. EDIT: There’s now a fabulous Italian period drama inspired by the book!

Our romance-themed entertainment site is on a mission to help you find the best period dramas, romance movies, TV shows, and books. Other topics include Jane Austen, Classic Hollywood, TV Couples, Fairy Tales, Romantic Living, Romanticism, and more. We’re damsels not in distress fighting for the all-new optimistic Romantic Revolution. Join us and subscribe. For more information, see our About, Old-Fashioned Romance 101, Modern Romanticism 101, and Romantic Living 101.
Pin this article to read later! And make sure to follow us on Pinterest.
By Autumn Topping on January 2nd, 2014