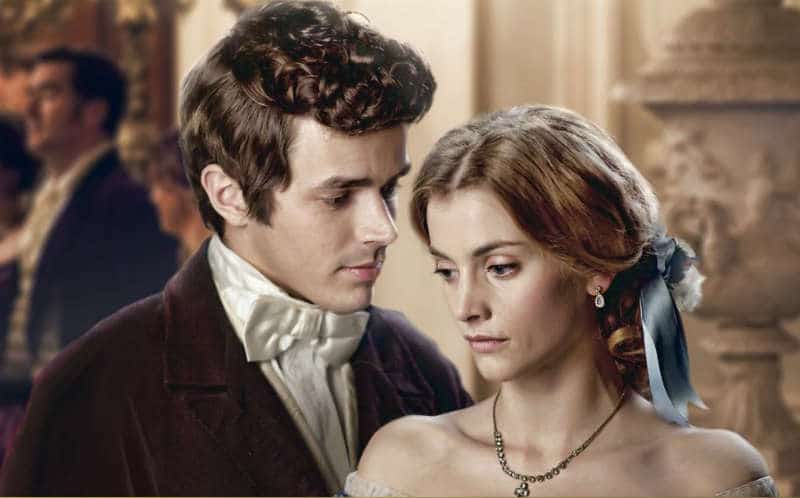 THE MOMENT: Frank reaffirms his love for Mary.

Since new adaptations of Jane Austen or Elizabeth Gaskell period films have disappeared for the time being, popular production companies like BBC or ITV have put a great deal of effort into making dramas set in the latter 1900’s. These cover the Second World War, and sometimes, even the ’50s and ’60s. When Julian Fellowes was recruited to adapt the Anthony Trollope novel Doctor Thorne, the period piece flew under the radar. The moment I spotted this one while “window shopping,” I knew it was worth taking a chance on. Also, knowing it was written by my favorite Downton Abbey creator added to its appeal.

The story of Doctor Thorne is simple, but endearing. It follows a young orphan girl by the name of Mary Thorne. Raised by her uncle, Mary has never known her parents but has been loved by her uncle. Raised in close proximity to the Gresham children, they grew up playing together and being friends. The only difference now is, the family has suffered some losses, and Mrs. Gresham is looking for wealthy spouses for her children. Her son, Frank, has his eye on Mary, but without title or fortune, Mary is anything but an ideal marriage candidate.

Wise beyond her years, Mary understands the improper match hers would be with Frank. And with the objections Lady Gresham has, Mary resolutely continues to push Frank away. His pursuit of her is pure, but Mary’s questionable birth is not something she can ignore. Instead, she tries to interest him in the vicar’s pretty sister, while Frank remains resolute in his devotion to Mary. Time passes and the pair goes their separate ways. Frank returns to school, and attends to the social niceties and plans his mother has for him. Mary leaves to stay with, and attend to, the widow of her uncle’s former patient. 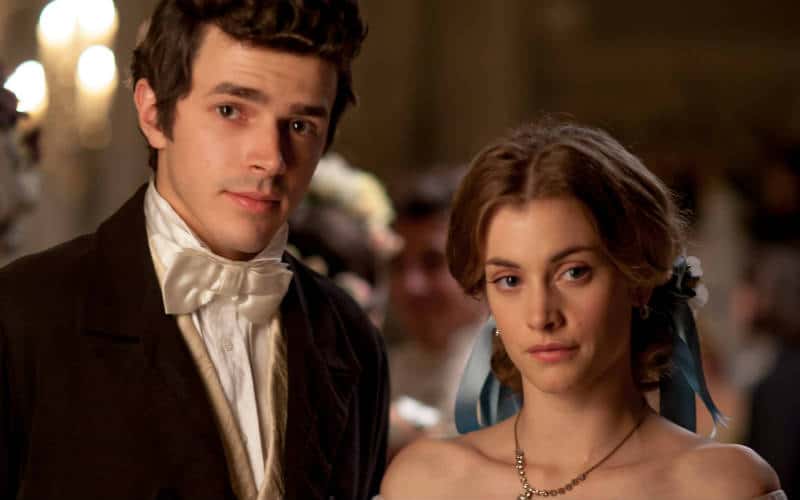 While attending necessary social functions, Frank’s aunt tries to push a wealthy American heiress on him. The two find themselves forming an unexpected friendship, but through it all, it’s Mary whom Frank continues to fall deeper in love with.

With purpose and unaltered feelings, Frank seeks Mary out at the Boxall estate where she is currently residing. Arriving at the estate, Frank walks out into the meadow to find Mary out riding. As she reigns in, they spot one another. The literal distance between them stretches into an emotional one as they exchange pleasantries. 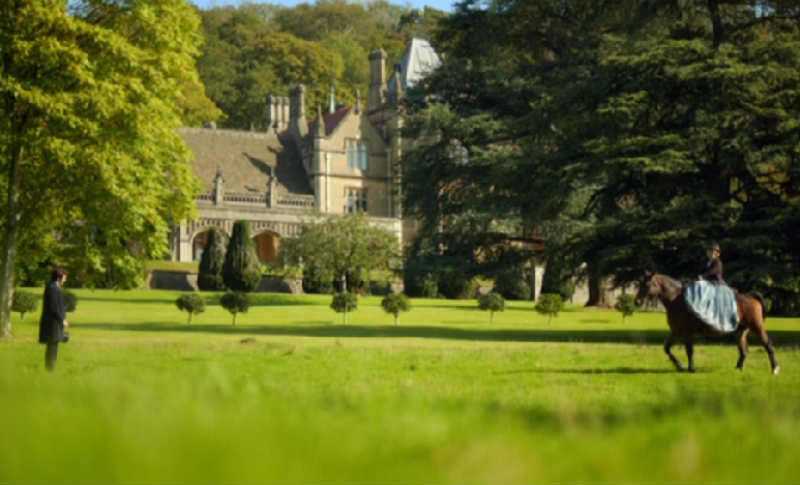 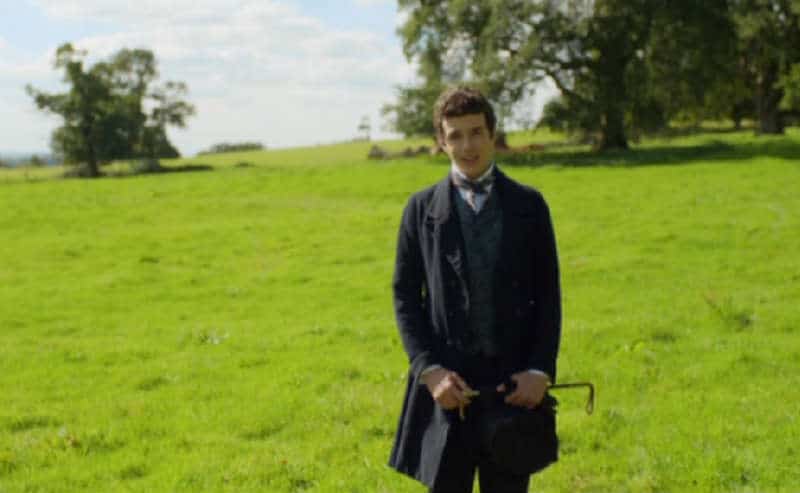 With a kind of nervous agitation, Frank stands in the meadow, hat in hand and remarks, “I’ve come to pay my respects. You must have thought me uncivil to stay away for so long.” 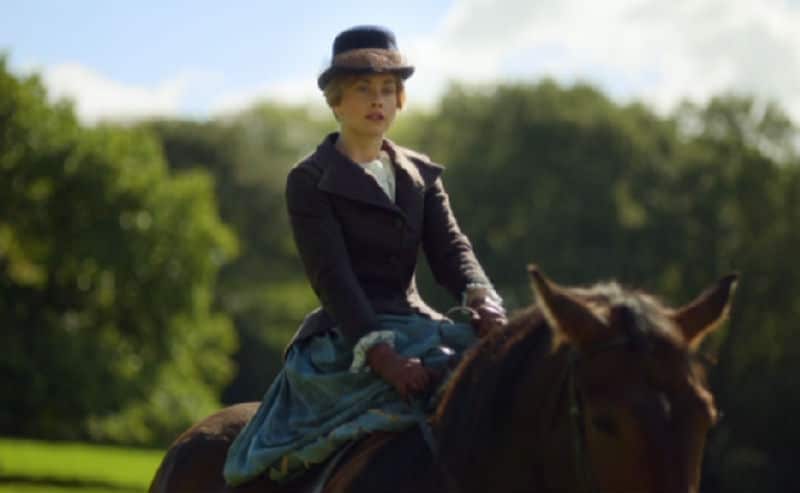 Sitting astride atop her horse, she softly replies, “Not at all.” Attempting an air of civil indifference, she continues. “I didn’t even know you were back in Greshamsbury.” Pausing, as an afterthought, she adds, “And I came to Boxall to be out of the way.” 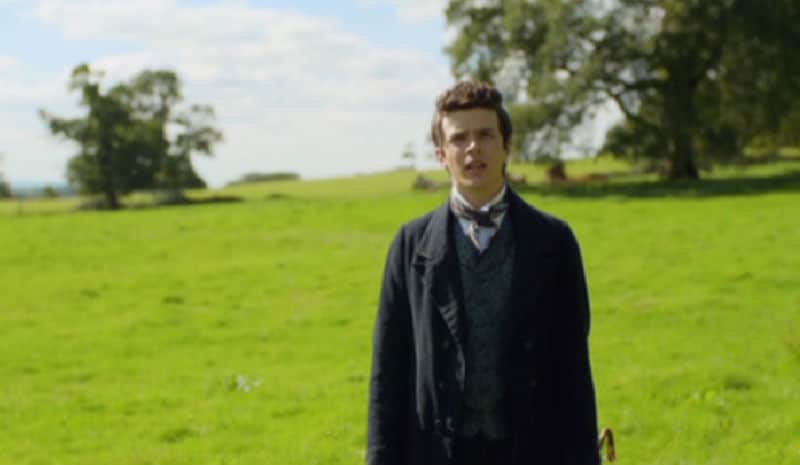 Quizzically Frank inquires of her what she means. “Why should you want to be out of the way?” 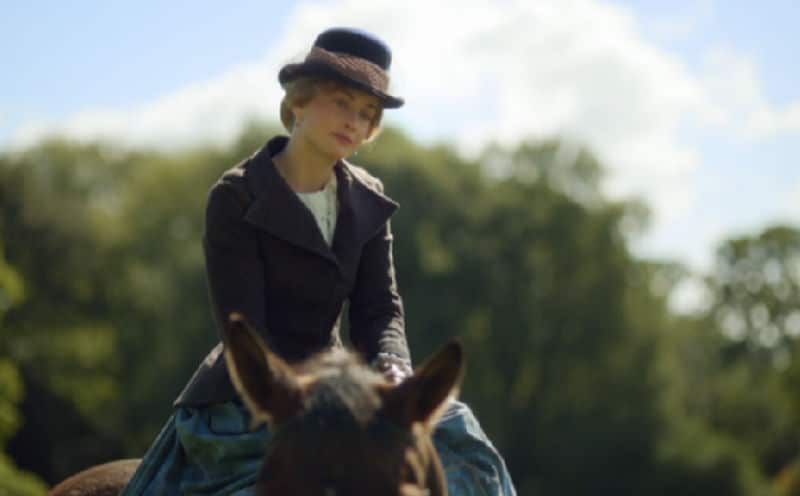 Mary tilts her head to the side and with a gentle smile on her face, she simply says, “I had my reasons.”

Small talk continues as Mary tells Frank she’s had no time to “think of myself.”

Remembering all their good times, and the laughter they shared, with a smile, Frank poses the truth as a question by replying, “When have you ever thought of yourself?” 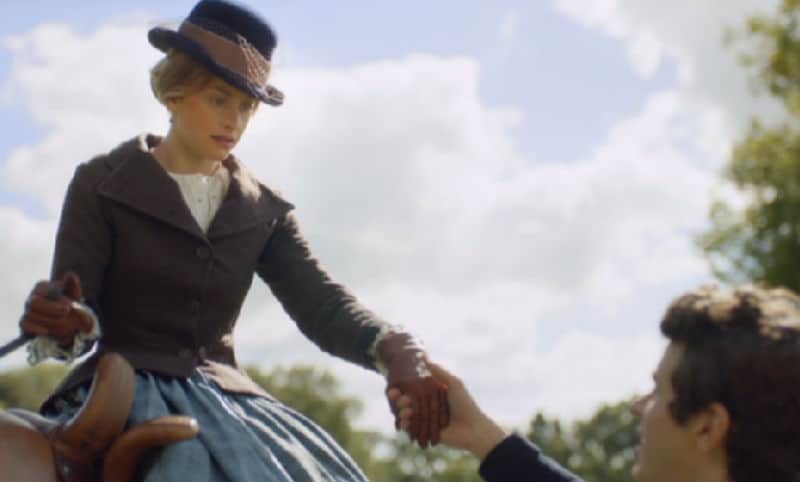 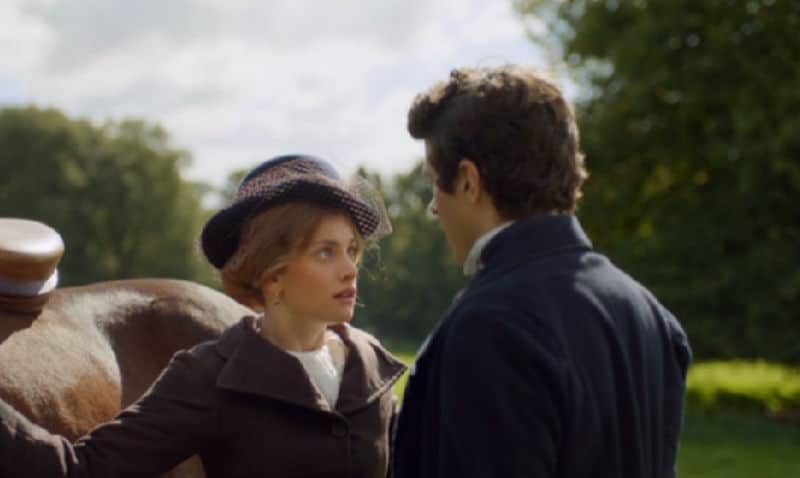 A gentle smile still in place, Mary asks Frank to help her from her saddle. As he closes the gap between them and comes to stand beside her, hands about her waist, he sets her gently to the ground. As their bodies stand in close proximity, Mary’s hat is gently set askew as their gazes affix for a chemistry-laden moment, both likely remembering all the reasons they love each other. 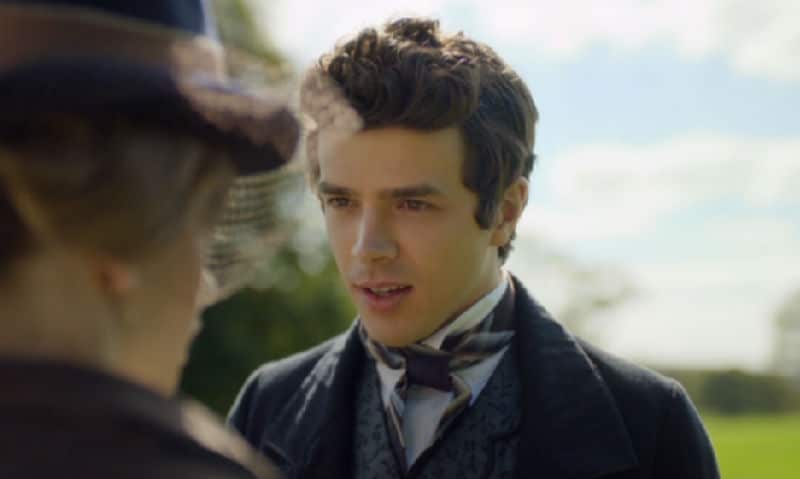 Emboldened by the moment, Frank presses on with his purpose for visiting. “Do you remember when we were last together?” he asks. 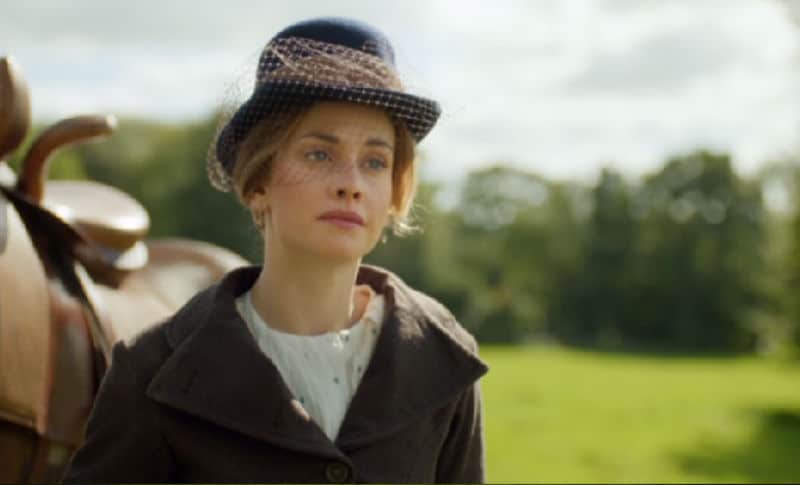 Stubborn yet with kindness, Mary tells him, “I remember you were very foolish.” 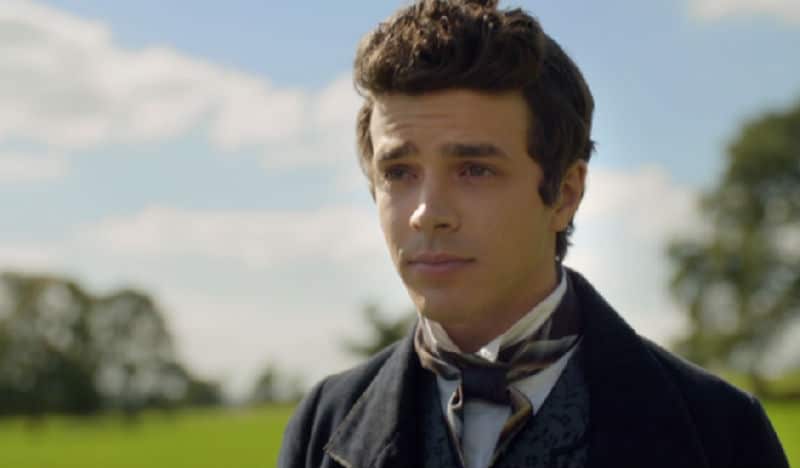 With a tentative smile full of hope, he admits he’s come to repeat his folly. Unable to keep his feelings silent any longer, in a total Mr. Darcy approved speech he reveals his true purpose for visiting. “For all the months we’ve been apart, nothing has altered me.” With eyes only for her, Frank stands there, hopeful his words have made an impact.

Surprise on her face, Mary makes her feelings well known by rebuffing his advances. “Mr Gresham, there are many reasons why I am not worthy of you.” Pausing briefly, she continues. “If you knew them all…”

As her words trail off, Frank assuages her fears with the two most important words: “I do.” Her gaze again locks with his at this admission while he further enforces his disinterest in her questionable parentage. “Or at least I know what you think I am ignorant of. Your uncle told me all about your birth.” 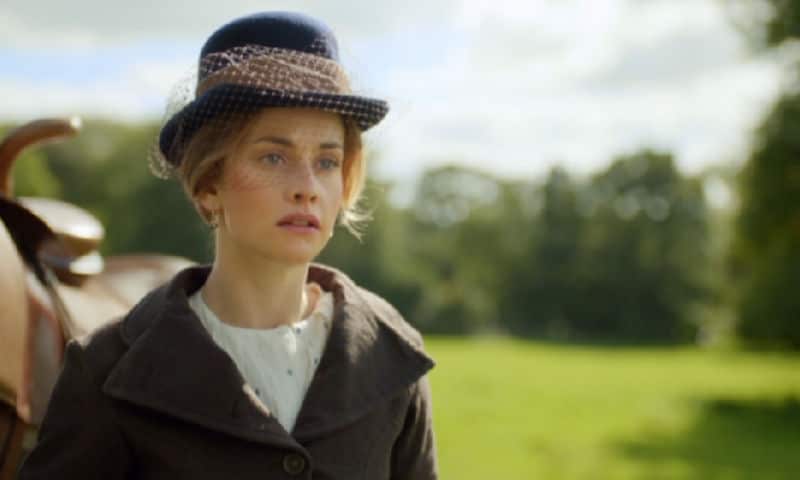 Mary is momentarily taken aback. Even knowing, Frank is still in front of her asking to let him love her. Not wishing to cause a rift between him and his family, Mary urges Frank to think well of his mother, even in the face of her opposition of their match. 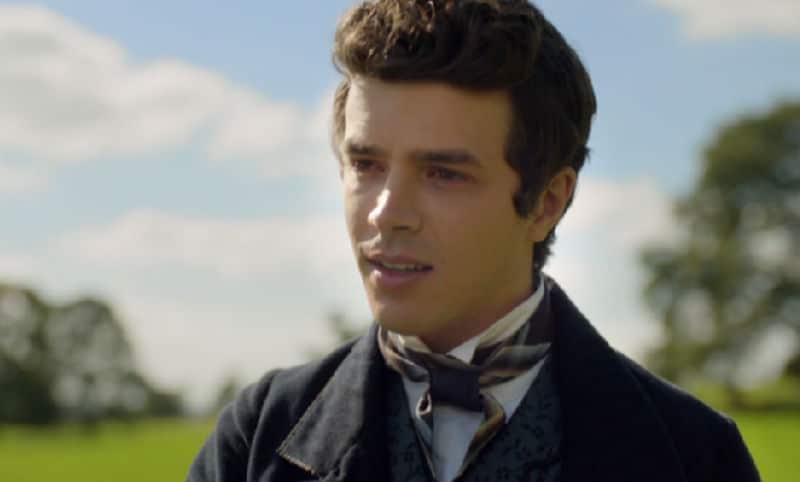 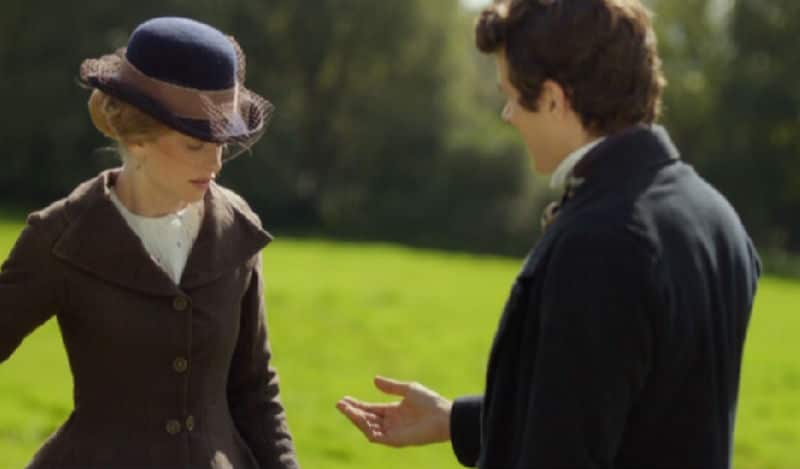 But that’s the last thing on his mind. Frank hasn’t finished with his intentions. With sincere affection and love written in his eyes, he confesses, “Mary, if you’ll tell me that I’m nothing to you, then I’ll go away and I’ll leave you in peace and my mother may be easy. Just say the words, You do not love me.” Reaching out as if holding a precious invitation, he holds out his hand and continues. “You cannot love me. And I will be gone.” 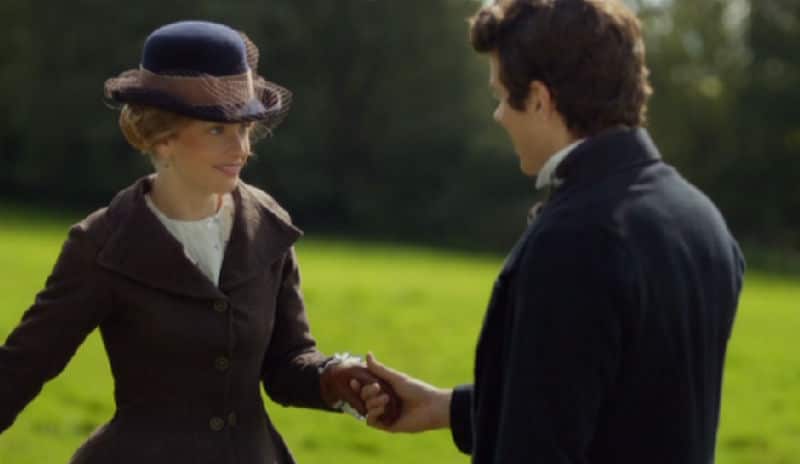 Gasping in pleasure, Mary looks down at the hand Frank offers and after a breath of a second, she places hers in his. Unchecked joy crosses Frank’s face. 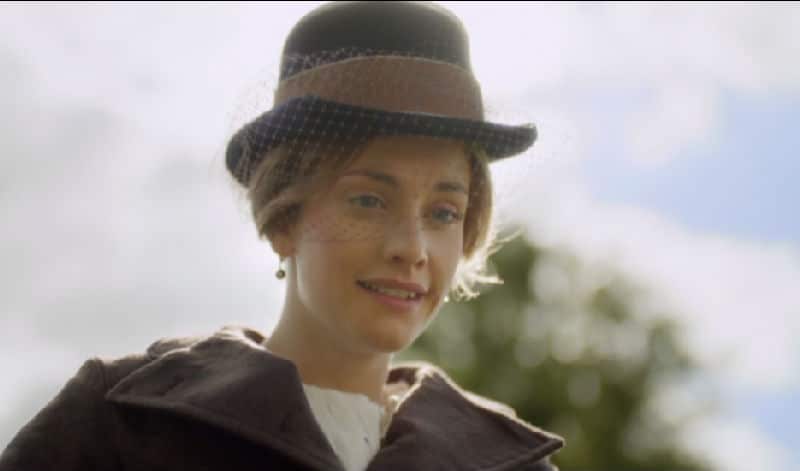 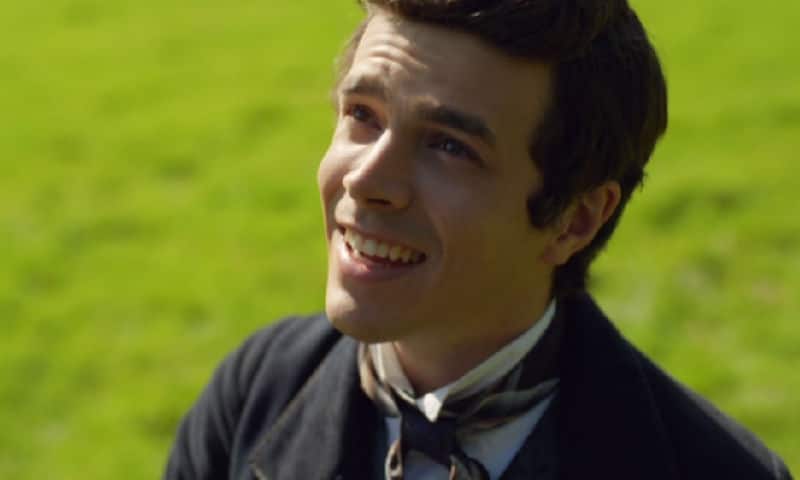 Bending to one knee, Frank makes his declaration whole by these words, “…darling Mary, will you please be my own wife? For the truth of it is simple; I love you with my whole heart.”

As disbelief and joy flickers across her face, with an excited exclamation, Frank rises and the two come together. Sweetly, Frank kisses Mary and the young couple seals their promises with a kiss. 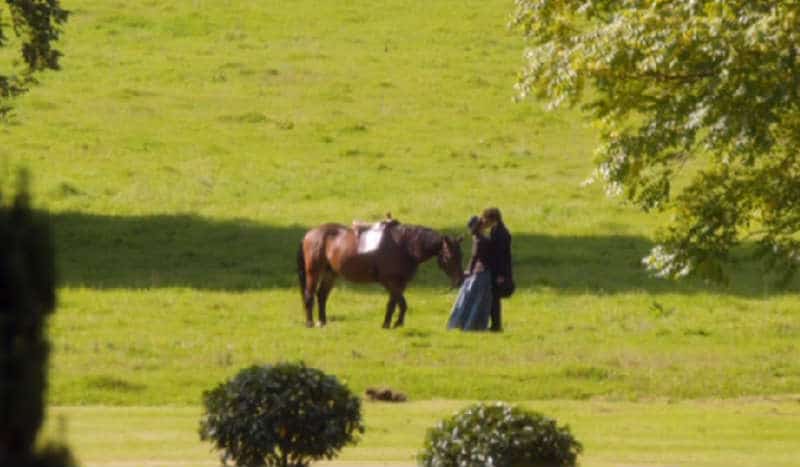 Though it’d be an ideal happy-ever-after, this is not the end of Frank and Mary’s story. Their circumstances evolve, and shift with time. But what the result of that is, I shall not say because fans of period dramas or Julian Fellowes simply must watch Doctor Thorne. It’s a delight from beginning to end, and is, in my opinion, over far too quickly. You can now rent Doctor Thorne on Amazon Prime.

Have you seen Doctor Thorne? Sound off below with your thoughts on the show, these characters or when your favorite romantic moment comes during the 3-hour miniseries. I’d love to read your comments.

Browse our Classic Romantic Moment and Romantic Moment of the Week series to discover more great moments like this in film and television. We put new additions up frequently.

Our romance-themed entertainment site is on a mission to help you find the best period dramas, romance movies, TV shows, and books. Other topics include Jane Austen, Classic Hollywood, TV Couples, Fairy Tales, Romantic Living, Romanticism, and more. We’re damsels not in distress fighting for the all-new optimistic Romantic Revolution. Join us and subscribe. For more information, see our About, Old-Fashioned Romance 101, Modern Romanticism 101, and Romantic Living 101.
Pin this article to read later! And make sure to follow us on Pinterest.
By Rissi JC on June 4th, 2016