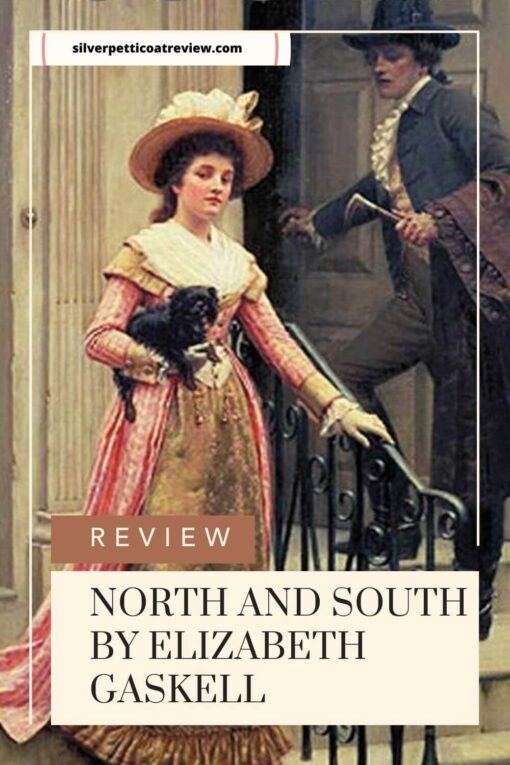 Okay, I’ll admit it. Over forty years on this planet, and I’ve had nothing to do with Elizabeth Gaskell. I hadn’t read any of her books, hadn’t seen any of the adaptations and miniseries, and I’m a former English major, gosh darn it!

This major gap in my life – and it is a decided gap, I have discovered – had started to be bridged this past autumn, when I discovered the BBC’s North and South miniseries. I was and am smitten. Miniseries of Wives and Daughters, Cranford and Return to Cranford have followed. And then I decided to start some reading of Gaskell.

Reaping the benefits of socialism in this socialist country I call home, coming from a long lineage of outspoken unionists and being a woman who once wrote a Masters’ thesis steeped in Marxist theory, I should have read North and South years ago. I really should have.

North and South is this fabulous blend of Austen-like romance with class struggle, social injustice, and the effects of capitalism. A mash-up of Austen and Dickens, with a sprinkling of the Brontës, and yet distinctly her own. It’s good stuff!

Among These Dark Satanic Mills: When a Southern Lady Meets a Northern Industrialist

North and South follows the story of one Margaret Hale, a nineteen-year-old vicar’s daughter, who has received a genteel upbringing in her aunt’s London home. Following her cousin’s marriage, Margaret returns to her beloved village of Helstone, to its vicarage. She turns down an offer of marriage from an eligible man. And the southern idyll begins to crack.

After much contemplation and prayer, her father decides to leave the church, thus losing his profession and their home. Margaret’s mother is a flighty, delicate woman, prone to headaches. Her father often retreats to his study and the security of his books.

So, Margaret self-assuredly and dutifully deals with it all. She deals with the preparations for packing and moving, and saying goodbye to the parishioners.

Her father has decided to head to the north, to the industrializing Milton (based on Manchester), to make a living there as a tutor. His good friend Mr. Bell has recommended the place and will aid in their relocation.

Again, Margaret has to deal with this new place, these new people, these new customs, these new dialects, these new circumstances. Money is tight. Her mother has retreated nearly permanently to her room while her father is eking out a living as a tutor.

So, her genteel upbringing is cast aside as the practicalities of running a home land on her shoulders. She unpacks and scrubs and cleans and irons, and she is tired. It is all so foreign and confusing.

In this confusion, in her attempts to deal with it all, Margaret comes across as haughty to many, her comportment and self-assurance as a sign of pride and vanity.

And then there’s Mr. John Thornton, one of Mr. Hale’s students and a local mill owner. He is taken with Margaret almost from the get-go, but she finds him lacking in refinement and sentiment.

The harsh nature of millwork disturbs her. The poverty and meanness of Milton distress her. And Mr. Thornton represents this apparent avaricious capitalism, using and abusing fellow humans for his own monetary gains. They don’t get along, and yet…

I’m not going to reveal the whole of the plot here. There are strikes and clashes between workers and owners. There isn’t quick repartee à la Austen, but rather longer discourses and discussions on humanity, morality, and rights and ethics. Many sides and points of view are shown.

There are deaths – many of them – and personal tragedies. There’s a future mother-in-law who despises her. And still, Margaret dutifully deals with it, growing in understanding and compassion, admitting to her own faults and foibles.

I love Margaret Hale. There is steel in this woman. She knows herself. She is dutiful and loving and faithful and considerate. It is Margaret who holds her family together. And she does what is necessary – even damaging herself and her reputation – in order to protect those dear to her and thwart injustice.

Read North and South. The ethical issues raised are so very apt today. The morality of industrialization and industrialized work still strikes a chord in this globalized world. And the romance between a certain northern industrialist and a steely, southern lady is one for the ages. Oh, Margaret!

It’s already been done, once in 1975 with Patrick Stewart and Rosalie Shanks and again in 2004 with Richard Armitage and Daniela Denby-Ashe. The 2004 BBC miniseries is considered something of a modern-day classic, and Richard Armitage has garnered a rather large and well-deserved fan following for his portrayal of Mr. Thornton.

Sandy Welch’s screenplay adaptation from 2004 is rather wonderful, despite its deviances from the book. I would certainly be open, though, to a new miniseries. Although, I do have trouble envisioning anyone other than Richard Armitage as Mr. Thornton.

Have you read North and South by Elizabeth Gaskell? What are your thoughts on this classic book? Comment below!