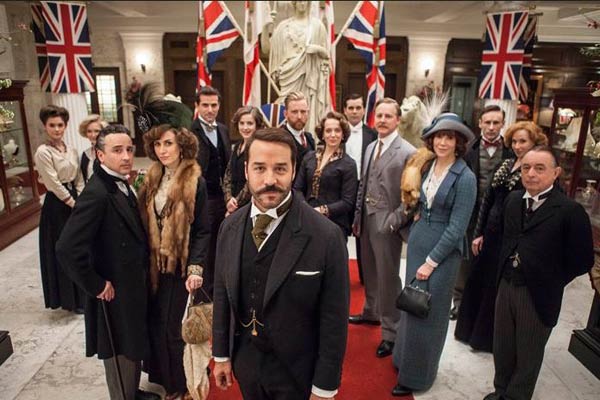 Given the worldwide success ITV’s Downton Abbey has basked in, there was a dash for competing networks to create dramas that had a similar appeal. One of the dramas that came from that creative drive was ITV’s Mr. Selfridge. Created by the extraordinarily talented Andrew Davies and headlined by American actor, Jeremy Piven, the series is inspired by a real family.

Born in Wisconsin[1], Harry Selfridge worked at Marshall’s in Chicago for many years before his trip to England where he invested a large sum of money to open his own department store, Selfridges. His flamboyant lifestyle and new money wealth caused a stir in London, which meant he and his American family (wife, Rose and four children) were sources of curiosity in London society. This also opened doors to the family in society that introduced them to some of England’s oldest and wealthiest aristocrat families.

But aside from the historical interest the series presents, this period drama has a lot more going for it. Living up to the usual standards British Dramas have for its period pieces, the show (gearing up to film its fourth season) has plenty of intricate characters, romance and of course, signature British drama. Here are seven reasons why Mr. Selfridge should be added to your to-watch queue. 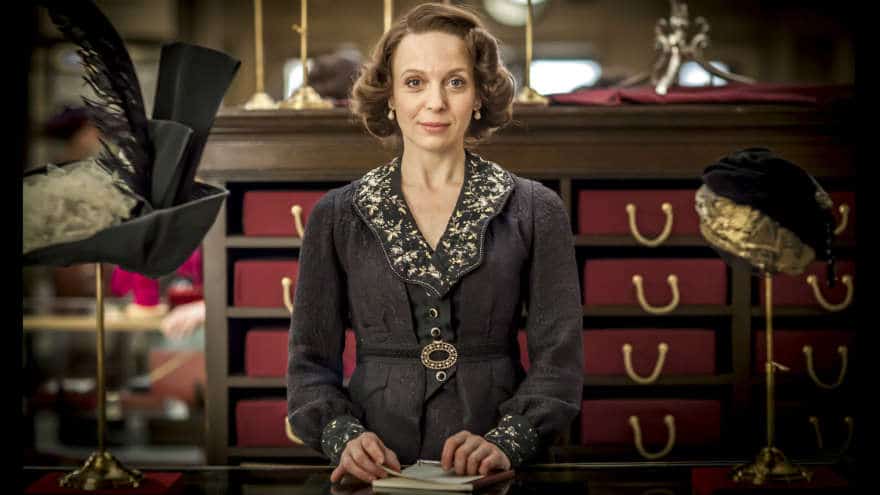 It took me a while to realize Amanda also plays Mary Watson (Dr. Watson’s wife) on BBC’s contemporary canon, Sherlock (goes to show you what a few years in the past and totally different look befitting that era can do for an actor). In this, Amanda plays a woman named Miss Mardle, a store manager at Selfridges who is a bit timid and “weak” in the beginning of this series. She’s considered a spinster and she clings to the one happiness she has in life, her affair with a married man. A man she is deeply in love with. (I don’t care for the dude. He doesn’t mistreat her physically, however, their emotional connection is anything but healthy).

Seasons two and three grew my appreciation for this character tenfold because the characterization has a lot of depth. She’s finally developed a backbone (perhaps in part because she inherited an independent fortune) and is far less dependent on those around her. She’s a loyal, kind friend and a fair supervisor to those employees under her charge at Selfridges.

Anything created by this man is pretty much a blind, must-see for me. It doesn’t matter what it is, if it’s a period drama, I am in 99% of the time. He’s behind the more recent adaptations of Little Dorrit (2008), Bleak House (2005), Northanger Abbey (2007) – which I adore, and the iconic A&E adaptation of Pride and Prejudice along with copious other period dramas. In collaboration with BBC, he also is helming the 2016 adaptation of Tolstoy’s War & Peace which stars Lily Collins, Gillian Anderson, James Norton and Tuppance Middleton. 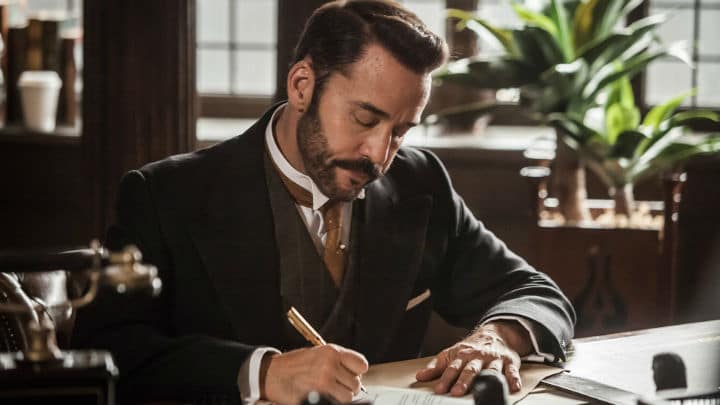 There is a diverse array of characters working at Selfridges and even as the series goes on we get to know Harry’s children far better (because they’re all grown up now). This keeps things interesting to say the least. We look at everyone from the conniving and wealthy Lady Mae to the sweet shop girl, Agnes caught between two men. There’s a distinct line drawn between the two worlds (wealthy vs. working class) and in that way, this is reminiscent of Downton Abbey. Not to mention the cast that brings everyone to life is one talented bunch of performers. 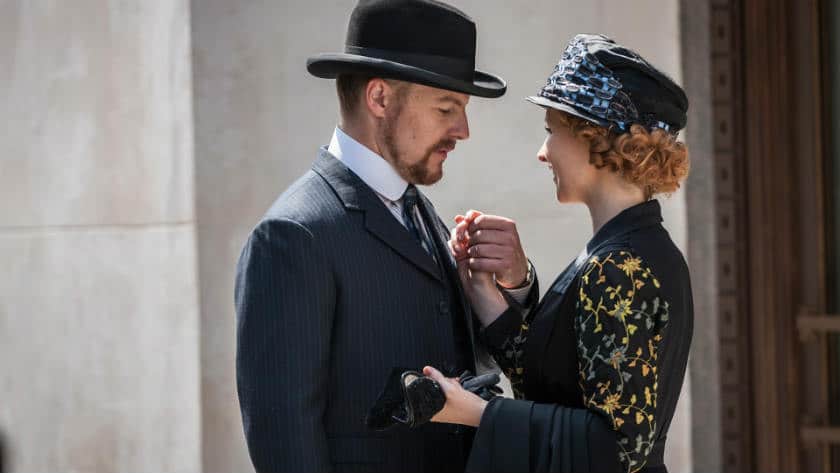 This is basically a prerequisite for any British costume drama, but I think the designer’s outdid themselves with these ensembles. Everything from the large hats to the sweeping, floor length skirts are gorgeous. Plus, the wedding scene that opened season three? Breathtaking. 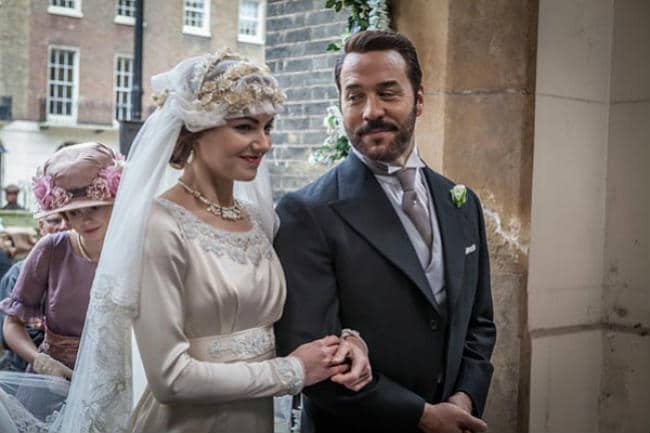 Harry Selfridge is not the most likable man because he’s a man unable to truly appreciate what he has. I suspect that the series’ writing along with Piven’s (who I do like in the role) cheerful, charismatic portrayal has made his character more entertaining. From everything I’ve read about the real Harry Selfridge, his character is portrayed quite realistically in these scripts. He was a gambler who nearly lost everything on more than one occasion and had multiple, notorious affairs[2]. But then on the other hand, he was a groundbreaking employer who made working conditions as good as he could for his employees[1]. So props to him for that. 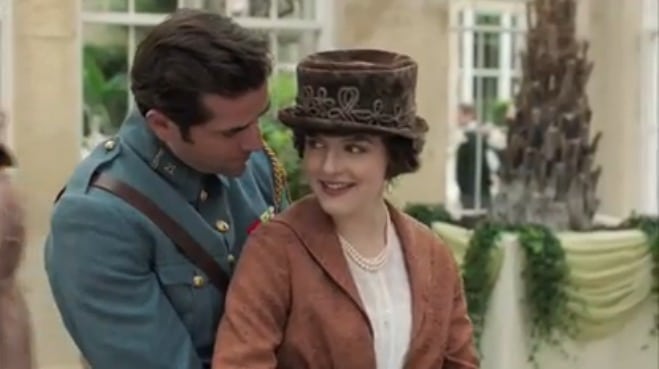 Harry Selfridge may not have been the most virtuous man when it came to romantic gestures or love, but there is still romance aplenty in this series. The fan favorite seems to be all about Agnes. It is a charming journey we take with her and the ultimate path finding her true love takes. There are lots of swoon-worthy moments to be found within this production. Don’t believe me? Just read about one said moment as was featured in our Romantic Moment of the Week series.

I love the setting. Not just the era, but also the majority of the stories unfolding inside the store. Within its walls, magical things happen because the set designers and fantastic behind the scenes crew create something new and exciting each week. It might not be the majority reason people return week after week, but a peek into this world is not too shabby a reason to tune in.

Seasons one-three are now available on DVD and can be purchased (streamed) on Amazon Instant Video.

Have you seen Mr. Selfridge? If so, comment with some of your favorite reasons to watch this decedent guilty pleasure. I’d love to know what you think. If you’ve not watched it, sound off below about why you haven’t.

* If you’re interested in more of the history behind this series, scroll through this fun photo gallery on the PBS website.

Our romance-themed entertainment site is on a mission to help you find the best period dramas, romance movies, TV shows, and books. Other topics include Jane Austen, Classic Hollywood, TV Couples, Fairy Tales, Romantic Living, Romanticism, and more. We’re damsels not in distress fighting for the all-new optimistic Romantic Revolution. Join us and subscribe. For more information, see our About, Old-Fashioned Romance 101, Modern Romanticism 101, and Romantic Living 101.
Pin this article to read later! And make sure to follow us on Pinterest.
By Rissi JC on June 11th, 2015