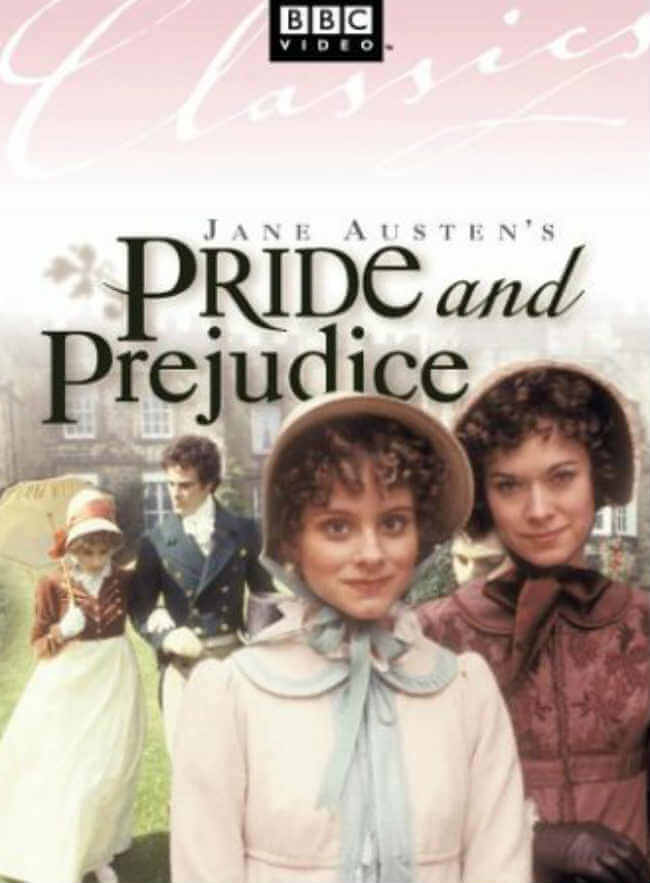 It is a truth universally acknowledged (by me!) that once you are a Jane Austen fan, you are obligated to watch every Pride and Prejudice adaptation at least once. This rule I just made up is set in stone, but you can’t really go wrong if you take the time to watch the BBC’s Pride and Prejudice 1980 miniseries. This is a very enjoyable adaptation with some splendid acting and a lot of good humor. It doesn’t quite measure up to some of the other adaptations because of a few flaws, but I don’t think a Jane Austen fan can do wrong by taking a look at this one. There’s so much to enjoy.

I don’t really need to remind you of the plot do I? The intelligent and witty Elizabeth Bennet (Elizabeth Garvie) lives in Regency England with her four sisters, her silly mother (who is obsessed with finding husbands for them all), and her sarcastic father, who is obsessed with teasing and thwarting the mother. When an eligible single man named Charles Bingley comes to live in the neighbourhood bringing his sisters and his best friend, Fitzwilliam Darcy (David Rintoul), romantic entanglements, reprehensible behavior, greed, pride and skewed perceptions abound. Don’t read further if you want to avoid spoilers.

Of course, the heart of this story is Elizabeth Bennet, and Elizabeth Garvie personifies her really nicely. She is an elegant, poised Elizabeth, but the charm and wit are in full evidence. She manages the character’s smiling demeanour beautifully even when making potentially controversial comments, keeping her composure yet holding her ground even in the face of Lady Catherine’s disapproval. The force of her anger is not lost either when she gives Mr. Darcy a proper dressing down or even when she is exasperated as she warns her father about taking a firmer hand with her sister Lydia.

Many of the other actors wonderfully capture the right semblance of their characters. The Bennet sisters are all wonderful. I especially thought that Sabina Franklyn as Jane feels just right – gentle, sweet, always good humoured and sensible. Mr. Collins (Malcolm Rennie) might be the most ridiculous version of the character I have ever seen mainly because of his appearance, a bit portly on top, but with tight black pants which make his long legs look skinny. As he struts along in front of the smaller Lizzie and Charlotte, he looks like nothing more than a giant genial crow. You’re in for a treat seeing his awkward dance with poor Lizzie at the Netherfield ball!

This Lady Catherine (Judy Parfitt) is the most meddlesome one I’ve ever seen, racing over to the Collins’ house in her carriage to scold them for ordering a leg of lamb which is too large for the family. Priscilla Morgan as Mrs. Bennet is perfect with her fussiness, her fretfulness and her lack of sense. As Mr. Bennet, Moray Watson, seems harsher with Mrs. Bennet than I’d like sometimes, but he actually fits with my idea of the character since though I appreciate his wit, I’ve never been a fan of his carelessness and his lack of sensitivity in the plot.

The humour in this adaptation is very well done and guaranteed to have you grinning.  The aforementioned dancing scene with Mr. Collins is a great visual gag. What I also liked were the other humorous moments which weren’t in the books but made perfect sense with what we know of the characters. A running joke about the fact that Lydia is always trying to get away without wearing her lace is telling as well as funny. No one ever says that the obnoxiously precocious Lydia needs the lace to cover her cleavage, but their meaning is clear. In another brilliant scene, Lizzie is reading a letter and making comments about it out loud. Mrs. Bennet stands far too close to her so she can see over her shoulder and keeps showing her reactions to the letter. Lizzie pauses and holds the letter out to Mrs. Bennet in a gesture which clearly says, “Do you want to read it yourself Ms. Nosy?” Mrs Bennet is of course very put out by this and goes away.

You may have noticed that I left out my opinion on one of the key actors in this movie. We all know that Fitzwilliam Darcy, played here by David Rintoul, is an essential part of any Pride and Prejudice adaptation. Next to Elizabeth, Darcy’s portrayal is vital, so a lot is placed in the actor’s hands. Unfortunately, I don’t think Rintoul lives up to the part well. Darcy is supposed to be an outwardly cold, off-putting and condescending man. Rintoul manages to bring this out in his portrayal, but is it possible to say he does his job too well? There is almost no sign of warmth in him for most of the story, and even though Darcy is supposed to be rather cool, we know that he and Elizabeth danced, exchanged witty banter, and he did smile at her before the big scene between them which proves to be a turning point in their relationship, yet Rintoul doesn’t seem to come alive much in any of these instances. At times, his slow movements even seem to resemble a robot!

Watching him, I did think that it might be difficult for a viewer to warm up to Darcy in any adaptation since he spends so much of the book being disdainful and intimidating, but it’s not impossible. It makes me realize why in the 1995 adaptation, Colin Firth (some people’s definitive Darcy) was sometimes shown in unguarded moments apart from Elizabeth and his friends. There were times when he could show more warmth and when he could betray passionate feelings. It’s not Rintoul’s fault that such moments weren’t given to his Darcy, but it doesn’t help our overall impression of him and even during Firth’s frosty Darcy period, you got glimpses of underlying feeling, passion and anger in public – all essential elements of Mr. Darcy. Rintoul doesn’t seem to convey these feelings in any satisfying degree. Appropriately, he warms up to Lizzie later on in the movie, and he softens somewhat, but it’s not enough and doesn’t make him that much more endearing. I’m sorry to say this of a Darcy, but so it is.

Besides Rintoul’s disappointing performance, I can’t find anything else of great fault in this movie. I’ve heard people
say that the setting seems rather like that of a play, and I agree, but since Pride and Prejudice is a movie which features a lot of sitting around and talking in drawing rooms, this suits the story well enough, though other adaptations have created a setting which looks and feels more realistic. Don’t expect too many breathtaking views of scenery, thunderstorms and glorious sunsets though we get some nice views of the English countryside.

Overall, I enjoy this adaptation even though it is not my favourite one, and I think anyone else who loves this classic Jane Austen story would get a lot of pleasure out of it as well. Chances are you will find your favourite version of the Pride and Prejudice character you like the best in this. Even if you think you already have your favourite adaptation of this book, don’t let your prejudice prevent you from giving the Pride and Prejudice 1980 adaptation a try. You may be pleasantly surprised. Currently, you buy the DVD or watch it on Hulu Plus.

What did you think of the Pride and Prejudice 1980 miniseries? If you haven’t seen it yet, do you plan on giving it a chance? Sound off in the comments…

Our romance-themed entertainment site is on a mission to help you find the best period dramas, romance movies, TV shows, and books. Other topics include Jane Austen, Classic Hollywood, TV Couples, Fairy Tales, Romantic Living, Romanticism, and more. We’re damsels not in distress fighting for the all-new optimistic Romantic Revolution. Join us and subscribe. For more information, see our About, Old-Fashioned Romance 101, Modern Romanticism 101, and Romantic Living 101.
Pin this article to read later! And make sure to follow us on Pinterest.
By Dixie-Ann Belle on November 10th, 2015

6 thoughts on “Pride and Prejudice 1980: A Must For Every Austen Fan”