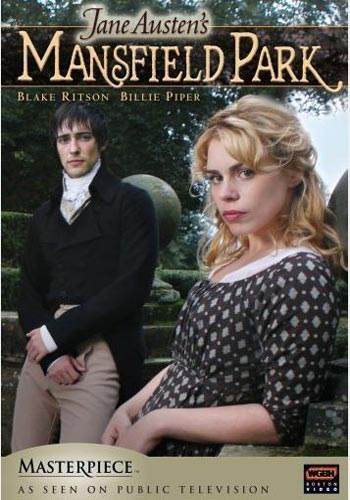 Mansfield Park gets a lot of flak for having a dull protagonist in Fanny Price as if being good is boring for some reason or another. I take the complete opposite view and have loved the story of Jane Austen’s Mansfield Park for several years, Fanny Price being one of the main reasons I love it so much.

But then there was the 2007 film adaptation of the book. I don’t remember loving it on first viewing. Something about the melodrama, weak Edmund choice in comparison to the fabulous Jonny Lee Miller and unusual script choices left me a little cold. I decided recently to give it a second chance, and I’m glad I did, even though many of my original setbacks still very much exist.

For those unfamiliar with the classic Austen love story, Mansfield Park tells the story of Fanny Price who gets sent away from her poor family to live with her rich Aunt and Uncle Bertram. Growing up, she is meant to feel her lower social standing, but she at least has a close friend in her cousin Edmund. As years go by and Fanny becomes a young woman, things at Mansfield begin to change. The first is the arrival of the fashionable siblings: Henry and Mary Crawford.

Much to Fanny’s dismay, Edmund is drawn to Mary’s beauty and charming personality (even though she always comes across a bit shallow if you ask me). For a while, he seems to forget all about Fanny in several frustrating scenes where you want to hit him over the head.

Then there is Henry Crawford. After witnessing his fake charms thrown on her engaged cousin Maria, he turns his attention to Fanny. She doesn’t trust him, but how can she refuse a man of higher class when she is in reduced circumstances? Especially when the man she loves is in love with someone else?

While much of Austen’s story is cut out in this short adaptation, the film mostly stays true to the story. Billie Piper gives Fanny the likable quality I find she gives in every character she plays (my favorite still being Rose in Doctor Who). She makes me feel what Fanny is feeling and I love that.

The rest of the cast is mostly good too. From Hayley Atwell (Marvel’s Peggy Carter) as Mary Crawford, Joseph Morgan (The Originals) as Fanny’s brother, to James D’Arcy (Agent Carter) as Tom Bertram, there are several great shout outs to make from these actors who are now fan favorite characters on various TV shows. While brief, I have to confess as a huge Agent Carter fan, I loved seeing Jarvis and Peggy onscreen together before they were Peggy and Jarvis…

Still, a couple of the casting choices left me slightly hesitant. I didn’t love either Blake Ritson as Edmund or Joseph Beattie as Henry Crawford. Both of Fanny’s men just didn’t suit the parts. They were good (and I still did like them), just not great. Henry Crawford needed to be even more charming and Edmund needed to be more likable for the payoff to work in the end. This may just be my personal preference, however, and I advise everyone to judge for themselves. Certainly, this being a Jane Austen story, the love story is still wonderfully romantic.

For huge fans of the book (such as myself), a few changes may also be hard to swallow as they weren’t the smartest deviations to make. While I didn’t mind the rushed storytelling here, the choice to cut out Portsmouth (the place Fanny’s parents and siblings live) so as to tempt Fanny into marrying Henry was rather an odd one. Instead of being sent away from Mansfield to Portsmouth and witnessing poverty firsthand, Fanny gets left behind at a huge estate (with servants mind you) as the rest of Bertram family go to London. I didn’t see the problem for a character that is supposed to be shy and introverted. After years of having to wait on everyone else hand and foot, I would have seen their departure as freedom, as a break from responsibility. This was really just a weak attempt to condense the novel, but it’s a change that definitely falls short and also does a disservice to Fanny’s characterization. At this point, I’m still longing for a mini-series version of Austen’s classic so the adaptation can delve more into the details.

Still, despite all this (and a few moments of melodrama that don’t quite click), what this version is, is an enjoyable 90 minutes to spend your time. Fanny’s selfless temperament coupled with an independent will that shines through when her integrity is at stake will make you root for her happy ending.

Our romance-themed entertainment site is on a mission to help you find the best period dramas, romance movies, TV shows, and books. Other topics include Jane Austen, Classic Hollywood, TV Couples, Fairy Tales, Romantic Living, Romanticism, and more. We’re damsels not in distress fighting for the all-new optimistic Romantic Revolution. Join us and subscribe. For more information, see our About, Old-Fashioned Romance 101, Modern Romanticism 101, and Romantic Living 101.
Pin this article to read later! And make sure to follow us on Pinterest.
By Autumn Topping on August 17th, 2015