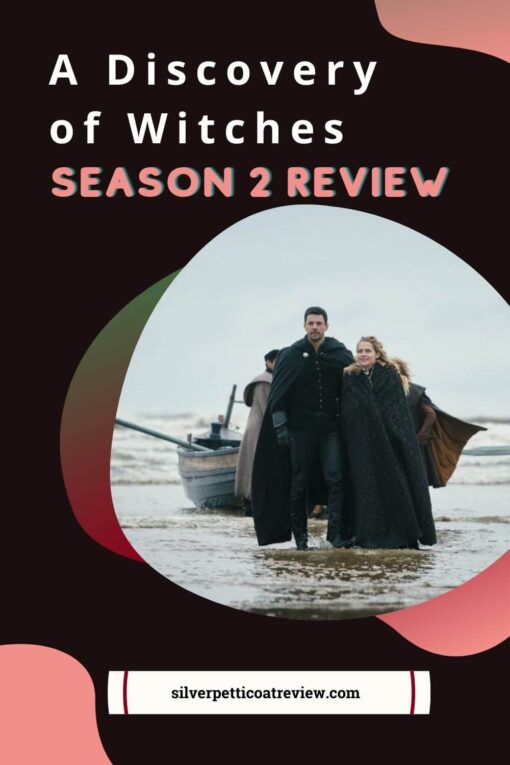 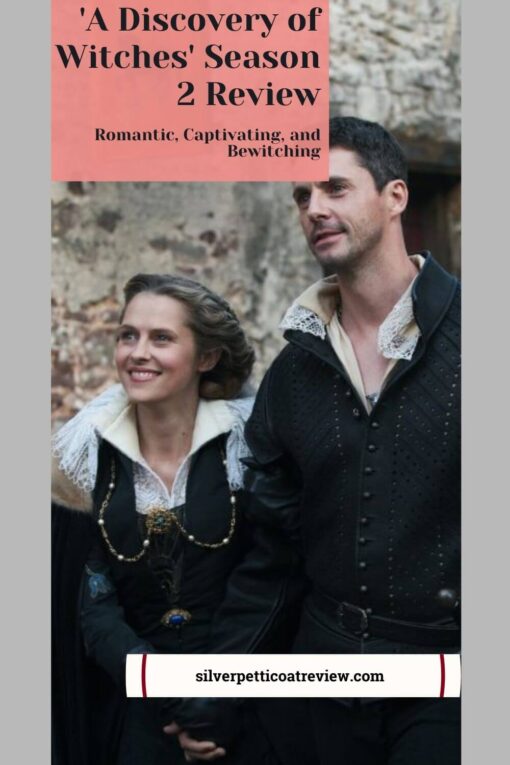 The long-awaited season two of A Discovery of Witches is finally here, and it was worth the wait!

Disclosure: Sundance Now provided screeners of the first seven episodes for review. All opinions are my own.

From the gorgeous costumes, exquisite set design, intriguing new characters, appealing romance, and more, it is a superb costume drama and bewitching fantasy romance series you won’t want to miss. Bad Wolf (the production company) continues to prove they know how to adapt books to the screen just right.

The Story: A Discovery of Witches Season 2

The season begins right where the season one finale left off – with Matthew (Matthew Goode) and Diana (Teresa Palmer) time-walking to Elizabethan London. Once there, they begin their quest to seek the alchemical Book of Life (Ashmole 782) while also finding Diana a witch tutor to hone her unusual powers.

In 16th Century London, Diana learns of Matthew’s past and what he used to be like – bringing them closer together.

Meanwhile, danger lurks for Matthew and Diana’s family and friends in the present-day as the Congregation members threaten them. Also, a mysterious new serial killer is on the loose, filled with blood rage.

There is a lot of information and plot twists packed into season two, so make sure to review season one and pay close attention while watching the new season. Since it’s a TV show adaptation, there isn’t as much time to spend on each plot development or character.

Season two adapts book two in the All Souls Trilogy, Shadow of Night by Deborah Harkness, and is incredibly close to the book material – so book fans should be pleased. While some characters from the book have been downsized and even others removed, the most significant difference is that the series spends more time in the present-day than the book does and even introduces plot points from book three early.

I thought it was a smart way to keep the intriguing contemporary characters in the forefront, letting us see what Matthew and Diana don’t know.

The story frequently shifts between the past and present – to give all the prominent cast members something to do. All in all, it’s a smart move.

I especially appreciated the fleshing out of Phoebe Taylor, a new character and love interest for Marcus. She’s sure to become a fan favorite quickly. Adelle Leonce is superb in the role of an art historian working at the Sotheby’s Auction House who falls in love with the mysterious Marcus. The expansion of Marcus and Phoebe’s love story will appeal to paranormal romance fans.

Thanks to Deborah Harkness’s expertise in Elizabethan history, the series – despite the fantasy premise – feels authentic to history. The little details make all the difference.

If I had one complaint about the adaptation, it would be that some scenes and characters feel glossed over. I think a few more episodes (perhaps expanding from 10 to 13) would have made season two perfect. Still, it’s a mild complaint because I selfishly want more time in this world and with the characters.

The love story between Diana and Matthew continues to develop, with the chemistry between the actors strengthening. Matthew Goode also proves he’s fabulous as a Byronic vampire, bringing out a ferocity and animal-like rage to his performance.

Adult fans will appreciate their mature relationship. The love scenes are done tastefully and feel emotional rather than explicit and vulgar.

Further, it is refreshing to watch Diana grow as a witch while also continuing to be an equal to Matthew – even in an unfamiliar time. Diana and Matthew balance each other out – and while they have a challenging relationship – they put in the time and effort to make it work.

Overall, A Discovery of Witches season two is captivating, romantic, addictive, and should appeal to a wide variety of viewers thanks to the excellent world-building, the first-rate cast, eye-catching cinematography, epic musical score, beautiful costumes, and excellent scripts.

The series is romantic without being saccharine and showcases a mature and authentic relationship between Matthew and Diana. Oh, and there aren’t words to describe how much I love the young Jack – played by new talent Joshua Blue Pickering. He’s adorable!

Now, there is good news if you’re wary about waiting another two years. Season three is already in production. So, the wait for season three will be much shorter. Thank goodness.

Content Note: The episodes range between TV-14 and TV-MA. There are a few love scenes, some fantasy violence, and brief strong language.

Are you watching season two of A Discovery of Witches? Have you read the books? What do you think of the new season? Let me know in the comments.