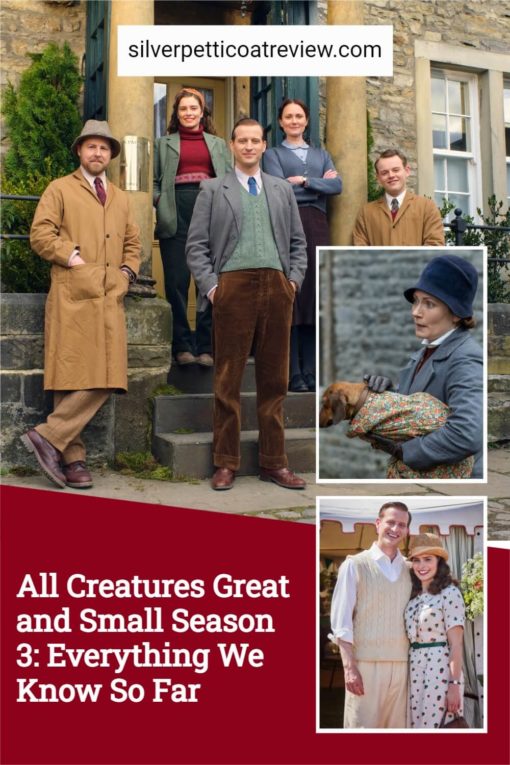 Masterpiece PBS’s All Creatures Great and Small is a comforting period drama based on beloved books (and inspired by a true story) about an iconic vet named James Herriot.

In previous seasons, an eccentric veterinarian named Siegfried Farnon hires James to join his practice in 1930’s Yorkshire. With excitement for his future, James moves into Skeldale House, where Siegfried’s younger brother Tristan is also studying to become a vet.

Together, the three veterinarians work and live together at Skeldale House with Mrs. Hall, the motherly housekeeper, all while facing their own challenges, heartbreak, and romance.

Of course, there are many animals to fall in love with, not to mention the sweet and wonderful romance between James and Helen, an independent farmer’s daughter.

So, it’s good news that we won’t have to wait much longer to see how James and Helen’s love story unfolds in season 3 of this glorious new adaptation of The James Herriot Adventures.

All Creatures Great and Small stars Nicholas Ralph as James Herriot. In his television debut, Ralph slides right into the role with ease and likeability.

No stranger to some of the best period dramas of all time, the series also stars Samuel West from Persuasion, Howards End, and Mr. Selfridge. West brings experience to the eccentric Siegfried, and you can’t help but love him!

Together, the trio of veterinarians plays off one another seamlessly and with brilliant chemistry.

RELATED: Miss Scarlet And The Duke Season 2 (And 3): Everything We Know So Far

Speaking of chemistry, the chemistry between newcomer Nicholas Ralph and Rachel Shenton, who plays Yorkshire Dales farmer’s daughter Helen Alderson, is fantastic. It’s sweet and comfortable; their chemistry is natural.

Shenton is talented in her own right and has even won an Oscar for The Silent Child, a live-action short she wrote and starred in!

After a long wait, All Creatures Great and Small will return in January! It’s time to mark your calendars for season 3’s seven-part series!

The final episode of season 3 will air on Sunday, February 19, 2023, 9/8c. However, it’s always important to check your local listings.

RELATED: The Ultimate Guide To Downton Abbey And How To Watch It In The Best Order

The series will also be available to stream on PBS Passport.

Beyond the third series, the series’ future is promising as it’s already been renewed for season 4.

James Herriot and crew deal with sick animals, eccentric farmers, courtship, and strict govern­ment mandates in a new season of the series lauded for its “soothing tone” by the New York Times.

Change is the order of the day as professional and emotional relationships mature in the rural Yorkshire veterinary practice immortalized by author James Herriot’s charming sto­ries. Themes for Season 3 include new partnerships, ghosts from the past, and doing one’s duty—and of course doing right by the animals.

“A lovely series grounded in a great respect for nature and all living things,” enthused the Boston Globe.

“A missing ring is just one snag as James and Helen’s wedding date approaches. For one thing,a farmer’s cow may have TB.”

What to Expect in Season 3

In an interview with Radio Times, Rachel Shenton teases that in the next season, “There may or may not be a wedding…”

However, I wouldn’t be too worried because Shenton also said, “she thinks the wedding is ‘really beautiful actually and Ben Vanstone’s done a fantastic job of capturing all the things that make All Creatures Great and Small so lovely and warm and full of community and stuff. And the wedding’s no exception.”

Meanwhile, a feature article on pbs.org gives even more juicy tidbits to look forward to in season 3!

“Wedding bells chime, and animal ailments abound in the highly anticipated new season of All Creatures Great and Small. Season 3 begins in spring 1939 as James and Helen prepare to walk down the aisle. Should their wedding go off without a hitch—and what are the chances of that?”

James and Helen will both “face new challenges,” including the testing of tuberculosis in cattle and Helen “letting go of her old life.”

Naturally, Tristan will also have his own challenges. This time, as a brand new and now actually qualified vet. It sounds like he’s still reaching for his brother’s “approval.”

As for Mrs. Hall, “she may be ready to open up to affection beyond her work family…and cricket.” Do I smell romance in the air?

But the most significant change for the vets at Skeldale House is the pending war with Germany looming “on the horizon.” Here, Siegried “contends with painful memories of his own experiences during the First World War, when he served in combat with the Army Veterinary Corps.”

The series also promises the return of “Mrs. Pumphrey, the wonderfully eccentric owner of Tricki…her pampered Pekingese” to keep things from getting too serious with World War II just around the corner. I can’t wait to see what Tricki is up to next!

Overall, it sounds like a promising new season of All Creatures Great and Small with excellent character development, a beautiful wedding to look forward to, and plenty of adorable animals to love.

All Creatures Great and Small Streaming (Where to Watch)

If you haven’t watched seasons one and two or want a refresher, you can watch All Creatures Great and Small on these streaming services: PBS Passport (the PBS app) and PBS Masterpiece Amazon Prime Channel.

You can also buy it digitally (a complete season pass on iTunes) or on DVD.

Will you be tuning in to watch the third season of All Creatures Great and Small? Are you looking forward to the wedding? Let me know in the comments below!