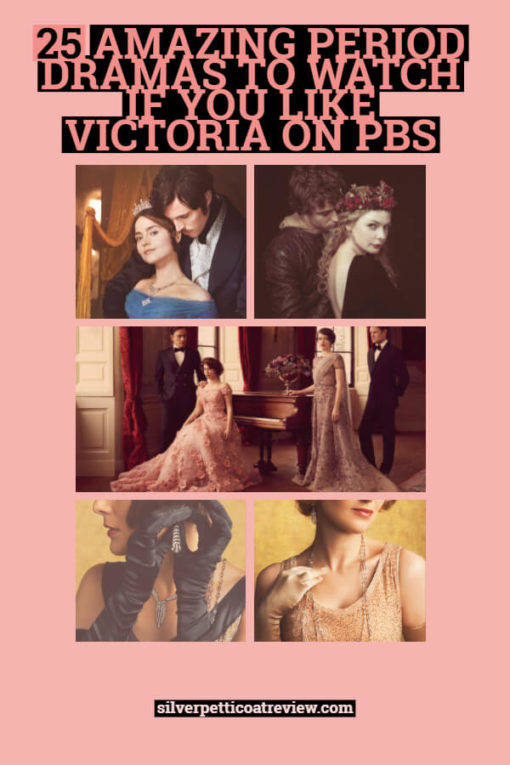 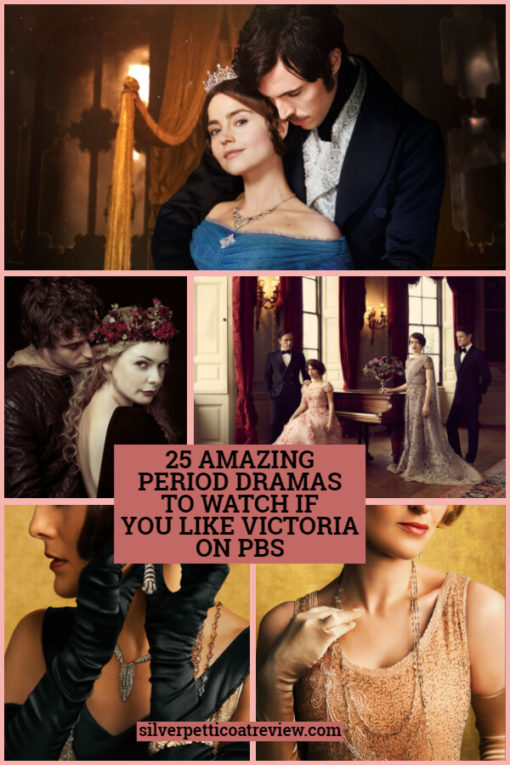 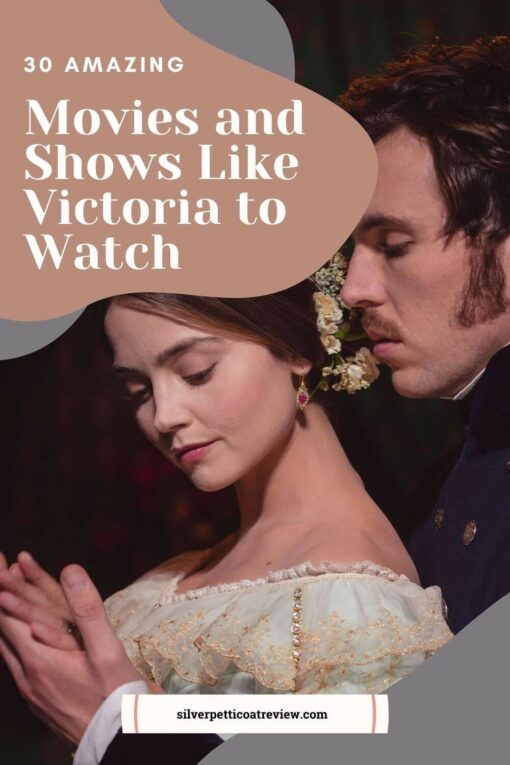 With Victoria on hiatus for the foreseeable future, we compiled a list of movies and shows like Victoria to enjoy. All period dramas, of course!

So, if you love sweeping romances and royals, then you will love this list. Of course, I also include excellent period dramas starring our favorite Victoria stars like Jenna Coleman, Tom Hughes, and even the swoony Rufus Sewell.

Sure, we all hope it won’t be long before the return of Victoria on PBS Masterpiece. Nevertheless, here are several other lovely period dramas like Victoria to enjoy until that day comes.

(Note: This article was first published in 2019 and has been updated for September 2020.)

This newer period drama has similar character dynamics between staff and household members. It is also more romanticized than realistic, much like Victoria. Fans of Victoria will recognize Leo Suter, who played Drummond. In this show, he plays the womanizing and troubled Daniel Beecham.

While the time period is vastly different from Victoria, the show has similar themes. In particular, Philip attempting to find his place in the world when his wife just so happens to be the Queen. The writing is also excellent and the acting superb. Just don’t go into this one for a sweeping romance.

Content Note: Rated TV-MA. Most of the series feels TV-14. However, there is mild nudity, strong language infrequently sprinkled throughout the show, and one explicit love scene in season two.

Dancing on the Edge occurs in 1930s England and tells the story of a black Jazz band intermingling with the white British elite. Mystery, drama, and intrigue follow as the band members deal with racism, love, and maybe even a murder.

Naturally, Victoria TV series fans should tune in because BOTH Tom Hughes and Jenna Coleman are part of a large and very talented ensemble.

Content Note: There are a few explicit scenes, but not many and they are easy to skip over if you prefer cleaner content. Also, there are a couple of scenes that briefly use the F word.

It’s six years after Pride and Prejudice’s end, and all of our favorite characters are back! But there’s been a homicide, and Wickham is the number one suspect. Jenna Coleman, our favorite Queen, plays his wife, Lydia.

While we love the similar upstairs and downstairs elements to both Downton Abbey and the Victoria TV Series, the movie features a special visit to Downton from Queen Mary and King George V. It was bound to be a royal success!

On a side note, Matthew Goode has now been in four out of the five titles thus far! He’s another dashing actor that knows how to make a splash in our period drama favorites!

For those who watch Victoria on PBS because you adore old-fashioned Victorian romances, I highly suggest the 2015 take on Thomas Hardy’s Far From the Madding Crowd. While there are other lovely adaptations, the romance in this one is perfection. And Matthias Schoenaerts as the leading man is incredibly swoony.

The King’s Speech follows King George VI and his struggles with a debilitating speech disorder. Colin Firth is fantastic in this fabulous true drama about a King who learns to overcome his stammer and lead his country in a time of turmoil.

So, as much as we all love Albert, I know there are also several Lord Melbourne fans. Rufus Sewell oozes romance and charisma. For that reason, I thought it fitting to share at least one period drama in which he plays the leading man getting a happily ever after.

Middlemarch is my personal favorite in the sea of his extraordinary period drama performances. The miniseries is a gorgeous adaptation of the George Eliot classic novel and a must-see for anyone who adores the romantic Lord Melbourne.

Set in Victorian times, North & South tells the love story of Margaret Hale and John Thornton during a strike. It has a brilliant cast, an unforgettable romance, and even a scene set at The Great Exhibition of 1851 (the realized dream of Prince Albert).

Denise, a young shop girl, determined to succeed in business, falls in love with her employer. Like Victoria, The Paradise takes place in Victorian times. It is also about a young woman torn between romance and ambition.

For Victoria fans seeking comparable high-quality period drama series from PBS, Poldark should be at the top of your list. Plus, Aidan Turner, as the leading man, is fantastic as the dynamic and tortured rogue.

If you’re seeking a royal period drama for entertainment purposes only, look no further than the underrated Reign. Sure, the historical accuracy of the series is absurd. However, that’s not the purpose of the wonderfully soapy show. Reign is genuinely a soap embracing all that soapy goodness.

Based lightly on a true story, this cute royal romantic comedy about Queen Elizabeth II is just what you need as a remedy for all the darkness in the world. The film makes you feel good in a Roman Holiday sort of way!

With an excellent script, charismatic British actors (including Victoria’s Leo Suter), Sanditon is must-watch television. However, the show does not have a satisfying ending due to early cancellation. Fans continue to campaign for a season two. Here’s to hoping their efforts pay off!

Content Note: Rated TV-MA for nudity in a bath scene and some explicit romance scenes.

Despite the talent involved, the structure doesn’t quite work. Nevertheless, the miniseries is still entertaining and worth watching if you love Jenna Coleman and have an interest in the history of the tragic sinking of the Titanic.

Judi Dench is back as Queen Victoria! Again, the movie focuses on her later years after Albert’s passing.

Victoria fans don’t want to miss this underrated miniseries starring a fabulous British cast. From Victoria Hamilton, Jonathan Firth, Victoria‘s own Diana Rigg to Downton‘s Penelope Wilton, Victoria & Albert is sure to fill that Victoria hole in your life. Naturally, the series focuses on the passionate love story between Victoria and Albert.

Content Note: This is rated TV-MA, but the UK version is less explicit. They filmed extra unnecessary scenes for the Starz production here in the US.

The Woman in White is a gothic mystery based on Wilkie Collin’s 19th-century detective novel. It is an intelligent, suspenseful drama full of romance. Strong with female characterization, it also reveals women’s lack of power in Victorian times – something hinted at in Victoria.

Catch up on this contemporary epic fantasy before the arrival of season two. Not only is the romance superb (once again starring Matthew Goode), but Tom Hughes is joining the cast for season two during Victoria‘s hiatus. As the show involves a bit of time travel, season two turns to the Elizabethan past. Tom Hughes will be playing Kit Marlowe: the famous poet and playwright.

Do you watch Victoria on PBS? Do you have any film and TV shows like Victoria to recommend for people looking to fill that void?

By Autumn Topping on September 9th, 2020