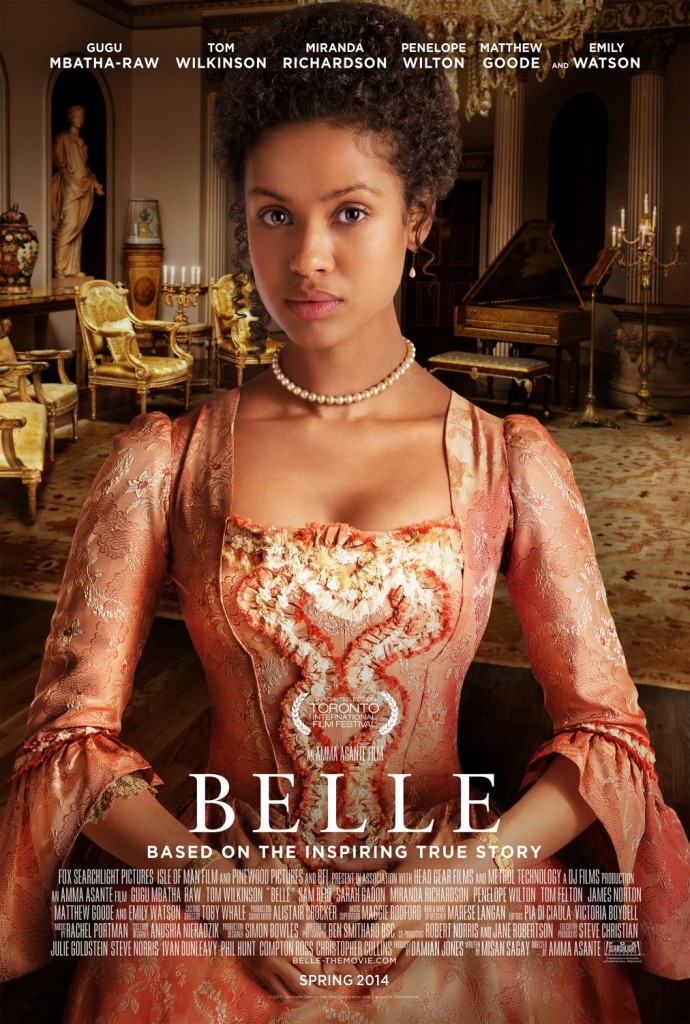 Part Mansfield Park, part Amazing Grace, Belle truly is a feast for all the period film lovers out there. Being one myself, I was entrenched into the story instantaneously. More Jane Austen than a film trying to “say” something, I appreciated that director Amma Asante focused on the story and the characters more than the “message.” Not much turns me off from a film (or book mind you) more than one with an agenda. I love themes and messages, but I prefer subtlety at the same time. Belle definitely achieves the subtle, a rare treat of a film from the beginning right up to the closing credits.

Belle truly is a feast for all the period film lovers out there.

Belle tells the story of an illegitimate mixed race daughter of a kind Royal Navy Admiral who loves her despite the time period of which they lived (the movie starts in 1769 in England), and although he can’t raise her himself because he is sent back out to sea, he brings her to his uncle to be brought up as one of the family. Reluctant at first, his Uncle the chief justice Lord Mansfield (the name did make me smile) raises Dido Elizabeth Belle alongside another niece around the same age. Belle grows up loved but there is still a stigma thanks to the color of her skin. For instance, she doesn’t eat with her family (particularly when there are guests). She is of higher status than the servants, but of lower status than her cousin and other relatives. She is an outsider in the midst of those she holds most dear and as she becomes an adult, awakenings begin to take place. Belle begins to comprehend just how different her life is from the norm.

Being that this is definitely inspired from a Jane Austen novel, Belle is also a love story and a movie about marriage. When she and her cousin Elizabeth come of age, they both long to find a good husband and make a good match (not wanting to end up like their spinster Aunt that runs the house – played by the wonderful Penelope Wilton). Unfortunately, they both have ‘issues’ that would keep them from finding suitable husbands: Elizabeth has no dowry and Belle (while independently wealthy thanks to her father) is of course black. What man would want to marry Belle in a time before the slave trade had ended? What would society have to say after all?

Thus, we are introduced to the Ashfords (Lady Ashford and her two sons). One, surprisingly or unsurprisingly considering Belle’s money, takes an interest in Belle and the other racist, horrible brother pretends to fall for Elizabeth because he thinks she has money (played by the devilishly perfect Tom Felton of Harry Potter fame). As Belle becomes more entrenched into high society, her skin color and differences from those around her become more apparent and even painful for she knows no one else like herself, no one she can relate to.

Every scene they shared felt authentic and made me root for them almost as much as I would any Austen heroine to find her hero in the end.

The story becomes even more complicated when she meets the handsome, and politically charged John Davinier. When he becomes a pupil under her Great Uncle, she begins to talk with him about a case involving slaves that had been killed at sea so the slave owners could get insurance money. An idealist in the similar realm of William Wilberforce, Davinier captivates Belle with his ideals, this intriguing man who treats her like an equal, and we the audience can’t help but fall in love with Davinier too. Their chemistry is palpable and romantic. Every scene they shared felt authentic and made me root for them almost as much as I would any Austen heroine to find her hero in the end.

Aside from the well put together story and direction, the characterization and the acting are superb. Every cast member brings something to the table. Gugu Mbatha-Raw (Martha’s sister in Doctor Who) as the title character is a revelation. What a performance! There are no weak links in the cast from Tom Wilkinson who plays the Uncle to likeable Sam Reid playing the dashing Davinier. However, scene stealer award definitely goes to Miranda Richardson, who plays the scheming Lady Ashford looking for suitable wives for her sons. She has this one scene in a carriage (I won’t give it away) that is SOO good that she deserves a supporting actress nod somewhere…

Only in limited theaters, if you see this in your area, see it right away before it’s gone! Trust me; you do not want to miss out on the opportunity to catch Belle in theaters. If you love period drama, then you will love Belle. Personally, it was refreshing to catch a well written, character film (that isn’t boring either) in the midst of all the typical Hollywood films and blockbusters flooding our screens. Plus, more female driven films (by a female director as well) needs to be supported! We need more films like this… Overall, I enjoyed Belle even more than I already figured I would. In fact, this might be my favorite of the year thus far. With a great story (based on a true one), believable characters, an outstanding cast, a memorable script, and a swoon worthy romance (unlike another film out this weekend that shall not be named), Belle is a rare gem, rare and as beautiful as Dido Elizabeth Belle herself.

Our romance-themed entertainment site is on a mission to help you find the best period dramas, romance movies, TV shows, and books. Other topics include Jane Austen, Classic Hollywood, TV Couples, Fairy Tales, Romantic Living, Romanticism, and more. We’re damsels not in distress fighting for the all-new optimistic Romantic Revolution. Join us and subscribe. For more information, see our About, Old-Fashioned Romance 101, Modern Romanticism 101, and Romantic Living 101.
Pin this article to read later! And make sure to follow us on Pinterest.
By Autumn Topping on May 26th, 2014