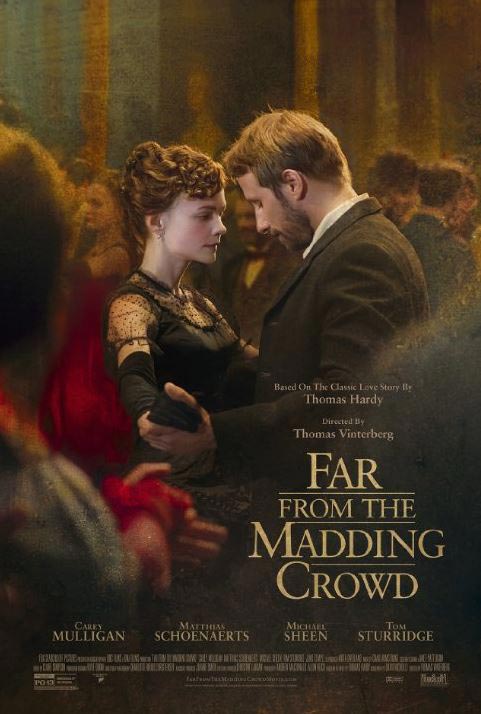 Far From the Madding Crowd Review

Every once in a while, it’s nice to take a break from all the blockbuster fare at the movie theaters and see something quieter, more character driven, and of course much more romantic. Thomas Vinterberg’s recent adaptation of Thomas Hardy’s classic novel, Far From the Madding Crowd, proved to be not only a gorgeous piece of art visually, but an old-fashioned romance for the ages.

RELATED A Little Chaos Review: Love in the Gardens of Versailles

The story, for those unfamiliar with the novel, is about an independent woman named Bathsheba who inherits her Uncle’s farm, becoming a rare woman mistress over the large estate. As someone who does not long to marry and give up her independence, she soon finds herself at the attention of three very different suitors.

There’s William Boldwood (played by the always charismatic Michael Sheen), an older and rich bachelor who finds himself drawn to Bathsheba after she sends him a thoughtless valentine. Then the roguish Sergeant Francis Troy comes along with a promise for passion (he having just been ‘jilted’ at the altar).

And finally, the third suitor is Bathsheba’s first “sweetheart,” the handsome and moral shepherd Gabriel Oak who she once turned down an offer of marriage to when she was in lower circumstances. All three have something to offer Bathsheba, but it is Gabriel Oak audience members will root for.

While Far From the Madding Crowd is definitely Bathsheba’s story, it is also Gabriel’s. Gabriel Oak lost everything when his new dog sent all of his sheep over a cliff (in the most terrible image of the film). Having to leave his farm behind, he sets out to find work when he discovers a barn on fire. Saving the barn, he soon realizes that the estate belongs to the woman he loved, the woman who once turned him down. She offers Gabriel a job and he gladly accepts. What follows between these two is one swoon worthy moment after another. Not to mention that the performance by Matthias Schoenaerts is unbelievably spot on and romantic. 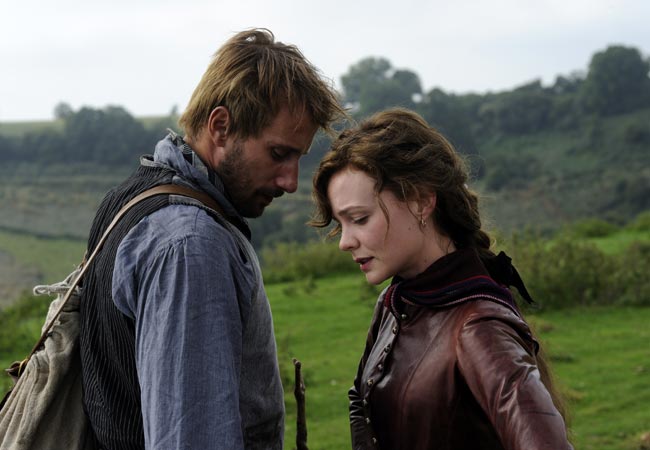 I honestly can’t say enough about Schoenarts’ interpretation of the role: the intense looks he gives Bathsheba, the delivery of his lines, the way he sells the goodness of this moral character who stays by Bathsheba’s side no matter how stubborn and prideful she becomes. Gabriel does everything for Bathsheba even after she falls for the caddish Troy (who honestly creeped me out from their first interaction). For those Austen and period drama lovers out there, Gabriel Oak will make you fall in love with him like you did with Mr. Darcy or Gilbert Blythe (though I warn that this being a Hardy story, the film does take quite a few darker turns). Matthias Schoenaerts captures the essence of the Romantic Hero in the same way Colin Firth, Richard Armitage or even Jonathan Crombie did and will soon capture the hearts of women everywhere. 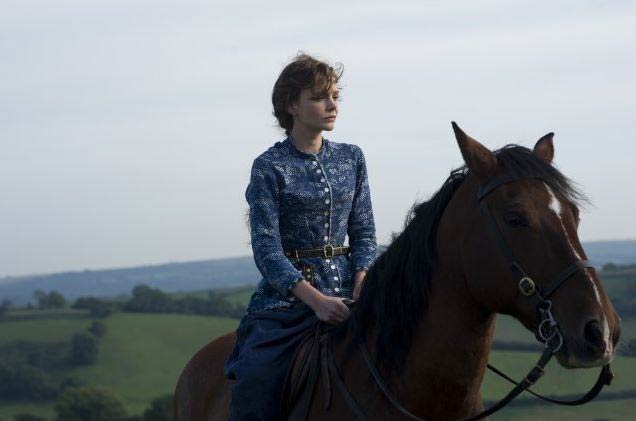 Carey Mulligan as Bathsheba also does a wonderful job playing the flawed and 3-dimensional female character that makes a lot of wrong choices, yet you can’t help but still want the best for her in the end. Bathsheba can be thoughtless, prideful, exasperating, but also dynamic, down to earth, and brave at the same time. Mulligan pulls off these traits with ease. This is a female character to truly get behind because she feels so real.

Aside from the performances, like all period BBC films, the costumes and sets are authentic.  Far From the Madding Crowd captures England’s Victorian Period with perfection. The visuals and shots were truly stunning. As a whole, Far From the Madding Crowd is a gorgeous adaptation that must be seen on the big screen while you still can (especially since these limited release films never last very long). For the book lovers out there (such as myself), a few of the cut scenes are maddening because their cuts make some scenes difficult to follow for those who haven’t read the book. Still, overall, if you love a good period drama and old-fashioned romance, Far From the Madding Crowd shouldn’t be missed.

Our romance-themed entertainment site is on a mission to help you find the best period dramas, romance movies, TV shows, and books. Other topics include Jane Austen, Classic Hollywood, TV Couples, Fairy Tales, Romantic Living, Romanticism, and more. We’re damsels not in distress fighting for the all-new optimistic Romantic Revolution. Join us and subscribe. For more information, see our About, Old-Fashioned Romance 101, Modern Romanticism 101, and Romantic Living 101.
Pin this article to read later! And make sure to follow us on Pinterest.
By Autumn Topping on May 25th, 2015