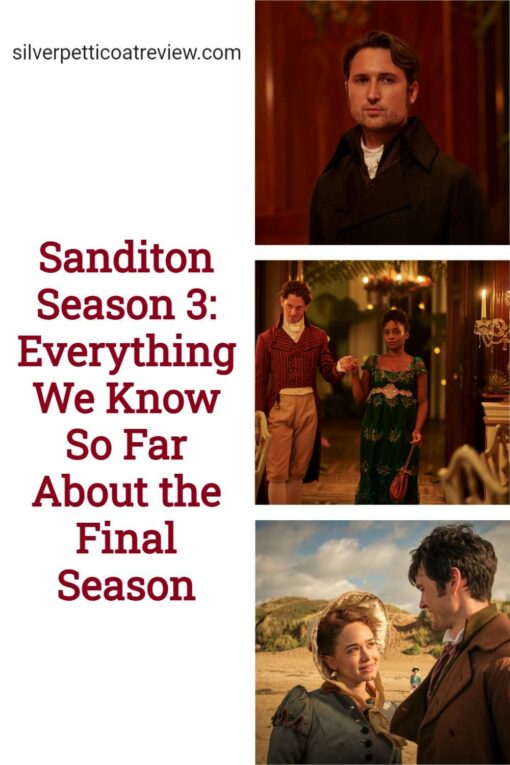 Sanditon is based on the unfinished novel by Jane Austen and follows the romances and friendships of the young woman Charlotte when she visits the seaside resort town of Sanditon and stays with the Parker family.

Andrew Davies (the legendary British period drama TV writer of productions like Pride and Prejudice) created the series and was the showrunner for season 1.

RELATED: All Creatures Great and Small Season 3: Everything We Know So Far

After the unfortunate original cancellation (leading to the loss of numerous cast members – including the lead Theo James as love interest Sidney Parker), Justin Young became the header writer for Seasons 2 and 3 when it received a surprise renewal – thanks to devoted fans.

WHAT HAPPENED AT THE END OF SEASON 2? (SPOILERS)

Sanditon is a period drama that knows how to end on massive cliffhangers! In the first season, Sidney ended things with Charlotte to help save his brother’s business despite being in love with her. Only for Sidney to then pass away tragically at the beginning of season 2.

And then, at the end of the second season, Charlotte (despite almost finding love again with the brooding Alexander Colbourne after dealing with a tricky love triangle) announces she has a fiancé: Ralph Starling – a local farmer from her hometown. Much to everyone’s – including the audience’s – surprise.

RELATED: The Best of What’s New on Britbox, Acorn TV, and PBS Passport in December 2022

Meanwhile, her sister Alison Heywood married the dashing Captain Declan Fraser (a Kenneth Branagh lookalike, if ever there was one).

Georgiana Lambe discovered the man she’d been falling for – Charles Lockhart – was after her money; Georgiana also found out her mother was alive, and Clara left her baby to Esther Babbington.

While some characters like Esther received their happy ending, Charlotte and Georgiana still need their much-deserved HEAs.

But could the writers have some more twists and turn in store for their spirited heroines?

For more on Season 2, read our review.

In the first photo, we see Charlotte Heywood looking lovingly up at her fiancé, Ralph Starling. Could Charlotte have real feelings for him? Or is she looking for a comfortable life after too many romantic disappointments and heartbreaks?

Is he a new love interest for Georgiana? Just a side character meant to throw us off with this photo. Or is another shady character coming after Georgiana’s money?

After two seasons of betrayal, it’s time for Georgiana to meet a good man or proudly choose never to marry! Either way, I’m here for Georgiana Lambe’s happy ending.

Is he upset with Charlotte’s betrothal? Will Charlotte end up with Alexander? Ralph? Or someone else like James Stringer (Leo Suter) after a surprise return? Okay, that last one was my own wishful thinking!

But season 3 looks to be promising based on these new photos.

Sanditon season 3 will premiere in 2023 on PBS on MASTERPIECE in the U.S. and on Britbox UK in the U.K. No official release date has been revealed yet.

However, since season 3 finished filming in 2021, the final series should premiere soon.

No official cast details have been announced. Although we do know a few cast members are returning based on the new photos and a few announcements from Sanditon showrunner Justin Young.

Yes, that last one may come as a surprise! Justin Young confirmed to Decider that Lockhart will return – “but don’t expect him to make amends to Georgiana.” Yikes! It sounds like the roguish bad boy will remain more of a cad than a redeeming Byronic Hero.

Unfortunately, we also know a couple of cast members will not return for the final season. Tom Weston-Jones, as Colonel Francis Lennox, will not return. Charlotte Spencer, as Esther, will also not be back.

Rose Williams (Charlotte Heywood) revealed to MASTERPIECE that Season 3 will also have a lot of characterization. “In Season 3, we see characters meeting with their own unique challenges and really having to dig into deep parts of themselves to find resolve.”

On the other hand, Ben Lloyd-Hughes confirms the story will be full of romance and emotional moments. “I think Season 3 will bring even more excitement, romance, fun, and tears in both forms.”

As for Charlotte and Alexander, their romance will continue to be central to Season 3.

Head writer Justin Young revealed to Decider more details: “The kind of cliffhanger of the season is that Charlotte is now engaged to Ralph…So at the top of Season 3, that’s where we will find her. And that’s the question going into Season 3: She loves Colbourne. He loves her. We know that. But now she’s engaged to Ralph and how is that going to play out?”

It sounds like Season 3 is going to end strong!

An official plot description has yet to be released.

While PBS has only released an official teaser thus far, the one quick sequence reveals a smoldering stare between Charlotte and Alexander – leaving fans’ hearts all aflutter!

Well, that’s everything we know about the show for now. I’ll update this page when PBS releases new details – which I imagine will be very soon.

WHERE TO WATCH SANDITON

To watch the romantic period drama series for the first time (or again), you can stream it on PBS Passport, PBS Masterpiece Amazon Channel, or buy it on Digital and DVD.

Your turn! How excited are you for the third season of Sanditon? Do you want Charlotte to end up with Colbourne? Or do you have another ending you’re hoping for? What do you hope will happen with Georgiana and the rest of the Sanditon characters? Sound off below!