On a whim, I bought a copy of this recent ITV series and in spite of the sluggish establishment of facts, I’m glad I did. Based on a novel by the name of Jambusters, the story follows the five principal women who make up the local Women’s Institute bordering in the shadows of a second world war in a small rural Cheshire village. Frances Barden (Samantha Bond) is making it her mission to oppose current president Joyce Cameron (Francesca Annis). Mrs. Cameron believes closing the Institute during war benefits everyone. Unexpectedly, Frances manages to sway the vote (by one) in favor of her. This doesn’t come without consequences. Joyce walks out the door of the institute and steps down as president with her loyal board members leaving with her. This lessens the group’s numbers and forces Frances, along with her sister, Sarah (Ruth Gemmall) to rebuild their numbers.

Meanwhile, Dr. Will Campbell (Ed Stoppard) experiences serious health issues and is frequently asked by mothers to lie on their son’s papers, providing their sons a reason to stay behind. Most insistent of this is Miriam Brindsley (Claire Price), a woman suffering from anxiety over her only son joining up. Then there is Dr. Campbell’s daughter, Kate (Rachel Hurd-Wood). By chance, she’s begun seeing a young airman and following a whirlwind courtship, the two marry, settling into a quiet happy life where unexpected tragedy awaits them.

Condensed in this introduction is merely a sampling of the characters you will encounter when watching an episode of this series. There are husbands and sons to meet, abused wives, sisters and mothers, soldiers and sweethearts among the litany of characters we meet walking these Cheshire streets. The number of familiar faces you’ll encounter will also delight serious British drama fans. Actors from Upstairs Downstairs to Wives & Daughters and Downton Abbey will pop up over the 6-episode span. And because of the stellar performers the Brits have, the cast is ah-ma-zing. This alone will entice potential viewers. But not to be lost in the shuffle, there is good in each of the character’s stories too.

Getting off to a slow start, the first episode earned a half-hearted reaction as I watched it. But moving beyond that, I really began to care for and invest in the goings-on of this small village. There are a lot of happenings and potentially tragic things to contend with. The affecting upheaval packed into each hour-long episode is riveting, though to be fair, most of the overreaching plot threads keep unraveling throughout without wrapping up a story at each installment’s end credits. Every script deals with new stories that crop up, adding to the layers, equal parts ample extents of social and emotional issues (everything from spousal abuse to affairs, consciences objectors to death). Dealings that end in highs and lows, trading off with the good and bad or they might just go the old-fashioned route and break your heart.

If small-town village life isn’t your “thing,” then this series is best skipped. The daily lives of these women are all about the small things they can do, and in that, they are often met with opposition to the fundraising they attempt. The series is admirable because of these acts. It’s inspiring to see a group of people working in tandem to aid a war effort (there really were no small acts when it came down to benefitting the war). In fact, though the story is nothing like it, watching this put me in the mind of the classic American Girl Molly stories. Why? Merely for the fact of the efforts these women take to, in a very real sense, fight along with their men. 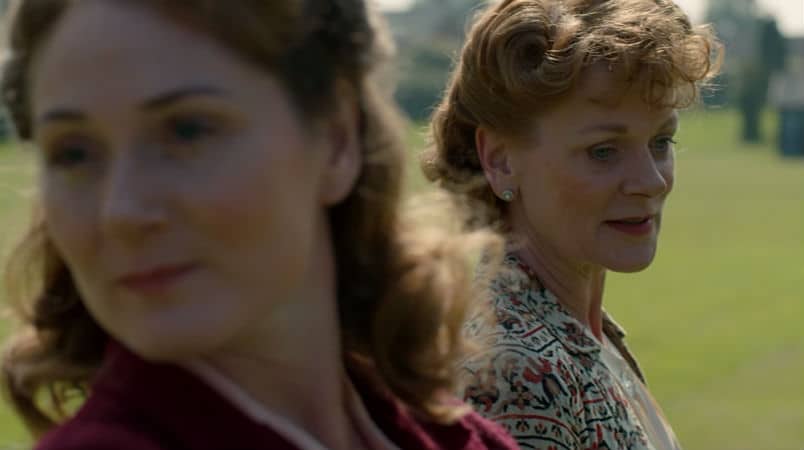 Since most of the characters are middle-aged, it follows the women already established in a marriage. However, a few romances take shape. One I was particularly fond of because of its wholesome “first love” kind of scenario and another I was easily swept up in (because of its “time is precious,” swoon-worthy bit of joy) regardless of its end. A third was more about a whisper, and putting the viewer on edge, asking, whether or not he’s genuine. Or is he interested merely because she’s in his life, unconventional or not? Were it not for the impediment that would prevent them being together (even if she was receptive), I could grow to be intrigued if not totally for the relationship.

Fans of Land Girls will appreciate this alternative to the long-since-canceled BBC drama. There’s a little something for everyone and instead of being a hindrance, the backdrop and setting provide for some excellent story cues. Fortunately, a second season has been ordered, meaning that stark final image of Home Fires inaugural season is not all we’re to have.

Have you seen Home Fires? What’s your favorite WWII drama? Drop any comments you have about this ITV production or any other down below.

Home Fires is now available for preorder (October 27th) on Amazon and it will air on PBS Masterpiece Theatre in the U.S this fall, beginning Sunday, October 4th.

Our romance-themed entertainment site is on a mission to help you find the best period dramas, romance movies, TV shows, and books. Other topics include Jane Austen, Classic Hollywood, TV Couples, Fairy Tales, Romantic Living, Romanticism, and more. We’re damsels not in distress fighting for the all-new optimistic Romantic Revolution. Join us and subscribe. For more information, see our About, Old-Fashioned Romance 101, Modern Romanticism 101, and Romantic Living 101.
Pin this article to read later! And make sure to follow us on Pinterest.
By Rissi JC on August 24th, 2015