THE MOVIE: The Guernsey Literary and Potato Peel Society (2018)

There’s something about old-fashioned romance that connects deeply with the romantic soul. What makes romance even more special is when it happens in a period drama that’s defined by old-fashioned storytelling. One such story is the recent adaptation of The Guernsey Literary and Potato Peel Pie Society and its introduction to the beloved characters, Juliet and Dawsey.

In the film, the story picks up post-WWII and introduces us to the plucky Juliet Ashton. Based on the novel of the same name, this story has been loved long before its recent debut on Netflix. With Lily James (Cinderella, Downton Abbey) leading a cast of new and veteran talents, the story blossoms in this cinematic environment.

There are so many romantic moments, gestures and examples in this film. Whether big or small, I was touched by many of these scenes (even those that involve the “other guy”). Unfortunately, we cannot feature them all, so today we spotlight a beautiful romance you’ll discover when you step onto this beautiful island.

WARNING: there will be film SPOILERS from here on in.

THE LEAD-IN: Juliet and Dawsey

Overall, the romance in Guernsey is subtle but beautiful. Even the scenes of Juliet in London have a kind of romantic quality. However, today is all about Juliet’s time on Guernsey. It’s Dawsey whom Juliet first meets from the Literary Society. First through the letter he pens (a letter that speaks to her heart), and then on Guernsey.

Upon her arrival, Juliet meets Dawsey but is unaware of who he is until the Society’s meeting later that evening. As her time passes on the island, Juliet finds herself drawn to Dawsey. For two reasons. One is the letter he wrote her which brought her to Guernsey. Secondly, because he’s kind to her where others are skeptical.

As they bond and enjoy afternoons with Kit, the young child Dawsey is raising, Juliet asks Dawsey about his role in Kit’s life. She learns that his friend, Elizabeth left the child in his care prior to her war-related imprisonment.

Standing there, he recounts the painful night Elizabeth leaves Kit in his care. He shares the way he begs her to remain behind – for Kit, and the unspoken implication, for him. Curious about his relationship with Elizabeth, they discuss Elizabeth’s arrest.

In an effort to comfort him, she tells him, “It’s not your fault.”

“It is,” he resolutely replies.

Still, she reminds him that he’s raising Kit, as his own.

Simply, he replies, “But I… I love her.” The realization genuine and meaningful as the weight of the moment settles around them. 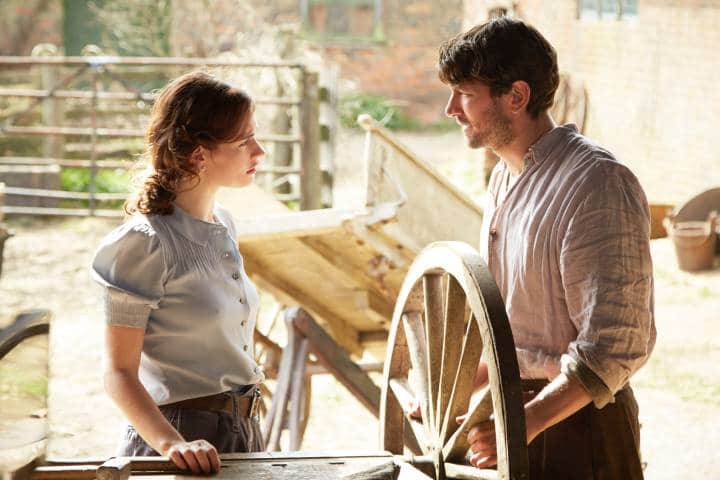 Under the sway of his sincerity and the words he speaks, she asks, “Do you love Elizabeth?”

Several heartbeats pass between them as they stand there. Holding one another’s gaze, neither one speaks… and then, with an unexpected arrival, the spell is broken.

A series of events leads to Juliet’s departure from the island and back to a life she assumes she wants. But in time, she realizes she doesn’t want a proper life and instead, the time she spent on Guernsey awakens something inside her. So, she writes about it. She writes about her time there and the people who touch her soul.

After weeks of non-stop typing, she compiles a book about the place and these people. A book that’s her best work yet. She bundles up the book and sends it to Guernsey, and encloses a heartfelt letter.

It’s Dawsey who opens the package. Inside he discovers the letter written to the Society. As they urge him to open the letter, he begins to read aloud.

The letter explains why she wrote this novel and its profound importance:

“Without knowing it, I feel I have been searching for the old familiar faces for many years now. And can’t quite account for why I recognize these as yours. But I do. Do you suppose it’s possible for us to already belong to someone before we’ve met them? If so… I belong to you. Or you to me. Or me simply to the spirit I found among you on Guernsey.

That is as good a definition of family as any I know. Thank you for sharing the story of your family with me.”

Around the table the faces of those listening change and begin to feel the loss of Juliet more keenly than ever – most especially Dawsey, who continues to read until the letter’s close:

“And for sharing Elizabeth. Though I did not get to meet her myself, I feel keenly how her life has changed the arc of my own forever, in ways I am only just beginning to discover. I wish you all peace. And hope that if books do have the power to bring people together, this one may work its magic. Love, Juliet.”

With these parting words, Dawsey immediately makes a decision: he’s going to London… or wherever Juliet is! He’s ready to find her and confess all he feels.

THE ROMANTIC MOMENT: Juliet and Dawsey

In London, as soon as the ship docks, he disembarks. Not sure where to begin, he follows the crowd, unaware the woman he seeks has already seen him.

The camera tells us, Juliet too is on the docks about to board a ship bound for Guernsey. But as she stands at the railing, she spots a familiar profile. It’s Dawsey. Calling out his name, for a moment he pauses as if he hears her, only to then press on through the crowds.

But Juliet persists! “Dawsey,” she calls.

Through the crowd, he sees a glimpse of her, and together they begin to make a path towards one another. Finally, they meet in a small parting of the crowd. 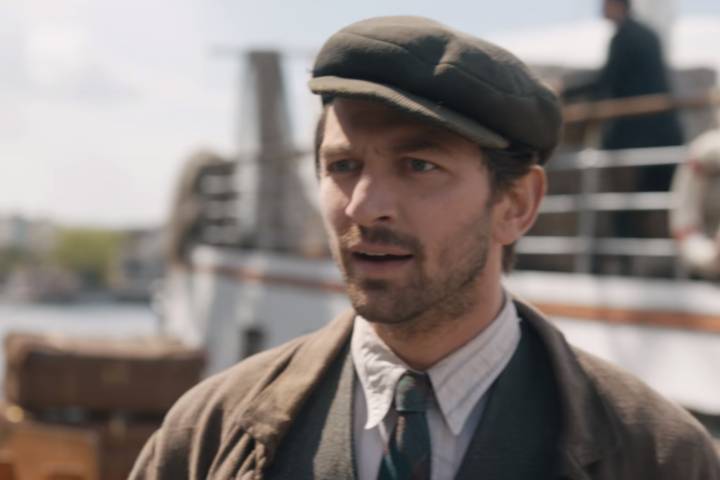 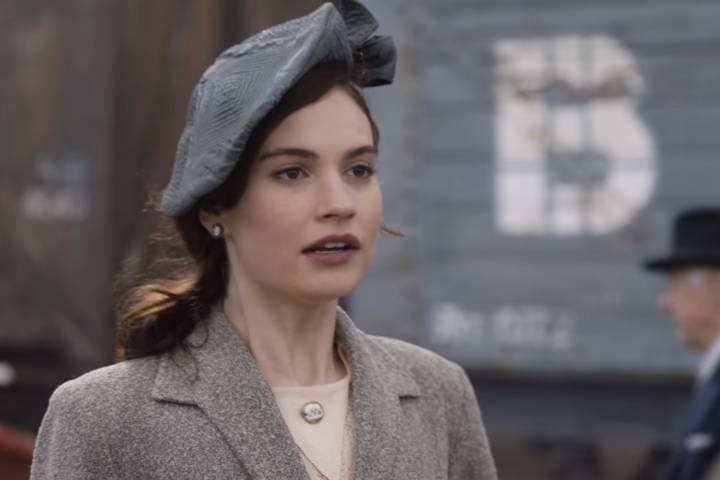 “Hello,” she greets him with a smile. “Where are you off to?”

In something of disbelief that Juliet is standing in front of him, he says simply, “I’m on my way to find you.”

“Me?” she asks. As if she needs reassurance, she queries further, “Really?”

“Yes” is his answer. Shyly, he continues, “Well, I… I wrote you a letter on the boat, just now.” Looking away briefly, he returns to find Juliet nervously looking at the ground. “Wanted to make sure I’d got it all down. Everything I should have said long before.” 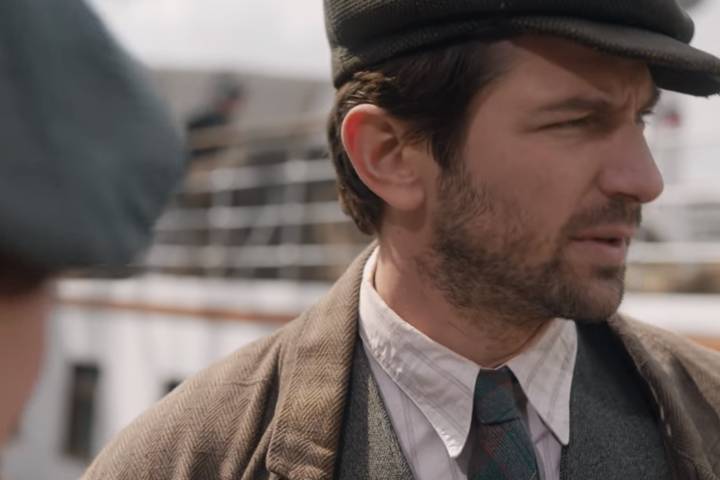 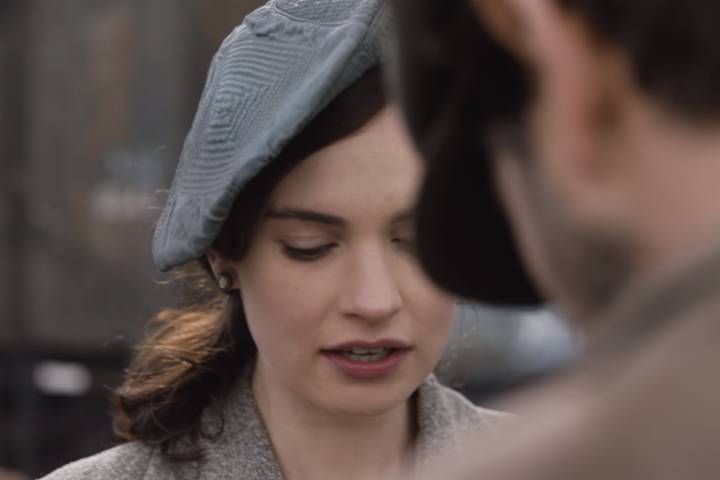 With bold determination, Juliet confesses her reason for being here. “Well…this is convenient because I was on my way to find you as well.”

Feeling reserved and unsure of the answer, but certain of what he feels in his heart, Dawsey removes his hat and tries to tell her. “Juliet…” he hesitantly begins.

But Juliet doesn’t let him finish because she has a query of her own, and an important one at that. 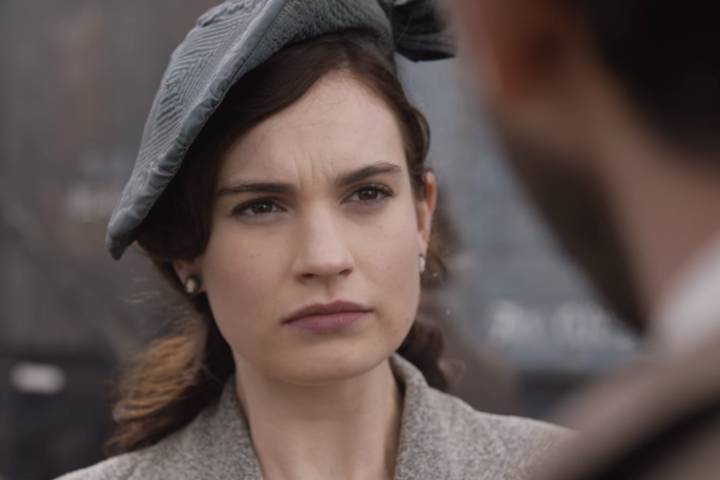 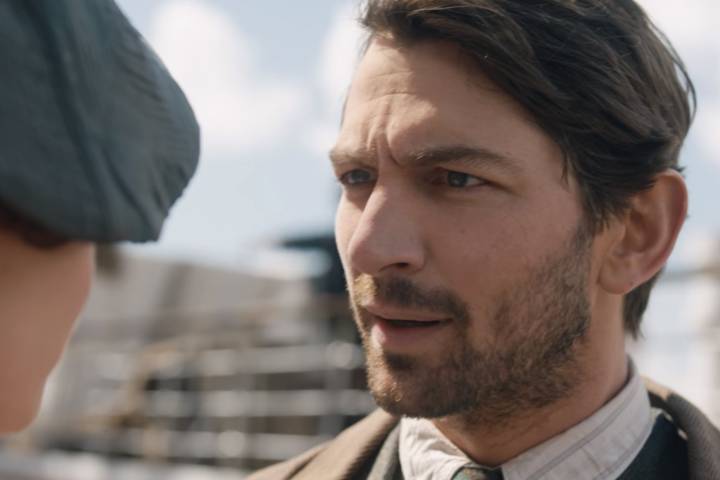 Without realizing it, he takes a tiny step closer to her. With confidence and without betraying his gaze, she tells him, “I’m in love with you… so, I thought I’d ask.”

Once the astonishment passes, Dawsey slowly finds his voice and replies with a buoyant but gentle “Yes!” 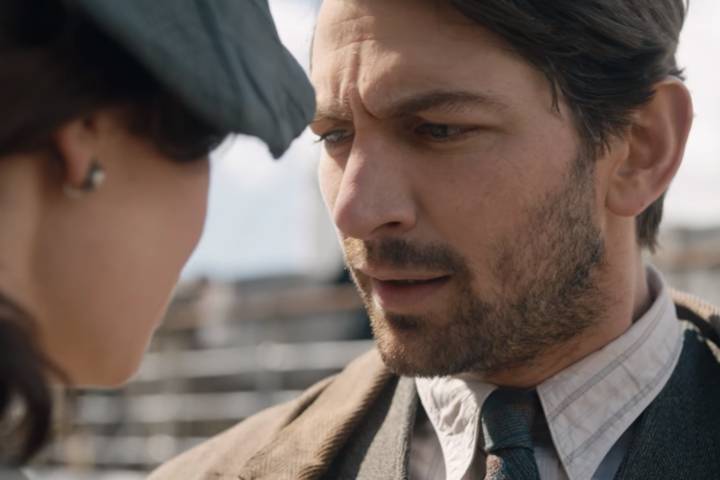 With tears in her eyes, Juliet echoes, “Yes?”

On a relieved exhale of nerves and joy, together, they meet for a kiss… and though the story is ready to roll its credits, their story is really only just beginning. 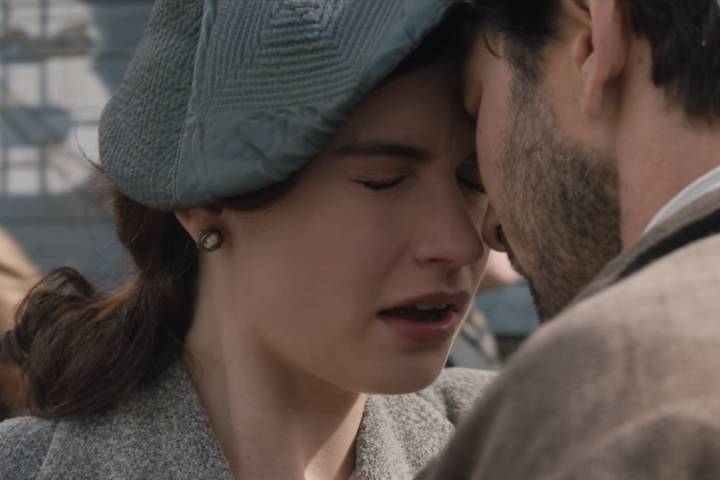 Romance can be subtle and touch the heart in powerful ways. That’s what happens in the charming story that is The Guernsey Literary and Potato Peel Pie Society. A story that’s as quiet as the gentle romance between these two. But if you’re anything like me, you’ll adore the characters, beautifully portrayed, and the relationship that blossoms between these two souls.

In the End, we need so many more on-screen stories like this.

Tell me, what did you think of this adaptation? Did you like the portrayals and the way everything unfolds? I’d love to know your thoughts. Please do drop a comment down below.

Stream ‘Guernsey,’ now on Netflix in the US. You can also buy it on DVD and Blu-Ray in the UK.

Our romance-themed entertainment site is on a mission to help you find the best period dramas, romance movies, TV shows, and books. Other topics include Jane Austen, Classic Hollywood, TV Couples, Fairy Tales, Romantic Living, Romanticism, and more. We’re damsels not in distress fighting for the all-new optimistic Romantic Revolution. Join us and subscribe. For more information, see our About, Old-Fashioned Romance 101, Modern Romanticism 101, and Romantic Living 101.
Pin this article to read later! And make sure to follow us on Pinterest.
By Rissi JC on August 25th, 2018

2 thoughts on “Romantic Moment of the Week: A Timeless Romance in Guernsey”