Atonement is an adaptation of the novel by Ian McEwan and a gorgeous period drama set during three different time periods. Like the novel, it explores love, class, war, lies and the very act of storytelling itself. On a scorching midsummer day, a young girl witnesses something she doesn’t understand between her sister Cecelia and the housekeeper’s son, Robbie Turner. What she decides to do next will alter irrevocably the lives of everyone present on that day.

Atonement is directed by Joe Wright and boasts an all-star cast and several young talents who had yet to become household names. Harriet Walter, Keira Knightley, James McAvoy, Juno Temple, Benedict Cumberbatch, Romola Garai, Alfie Allen, Vanessa Redgrave and a very young Saoirse Ronan to name a few. To have actors of such caliber all working together imbues the film with an even greater sense of importance than its excellent source material already provided. The acting by all is pitch perfect; the director clearly does not waste the talent he has surrounded himself with. It is a beautiful, perfectly paced adaptation of a modern masterpiece. Being quite familiar with the book I’d say that it is extremely close to the source material. This wouldn’t always work but McEwan’s novel lends itself well to the screen, being quite visual in his prose. More importantly, Atonement captures the essence of the novel.

The film makes use of sound in a unique way in its score to inform the pace. The rhythm of a typewriter or percussive noises made by the characters matches up with the music to create a truly unusual soundtrack. Scene changes are often accompanied by the sound of a typewriter roll being pushed back into place. Considering what we learn about the entire story later on, this seems especially apt.

It is a perfectly crafted film. There are little to no unnecessary frames and each of them is visually stunning, even the devastation at the beach is beautiful in its way. Robbie and Cecelia’s love story is bittersweet and touching; full of missed chances and the cruel twists of fate. But what moments they do have are passionate and heart-wrenching. 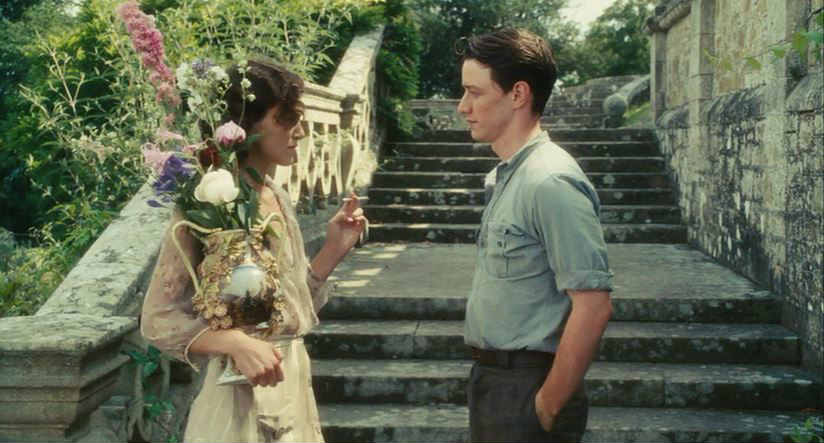 Atonement is a wonderful, heart-breaking film that you must see at least once (especially if you are a writer). Just maybe have a tissue ready when you do.

Content Note: This film is rated R and there are a quite a few instances of brief profanity, especially by one particular character during the war scenes. There is a mild sex scene without nudity early on in the film and an implied rape with a brief shot of the man’s bare buttocks. Many bloody injuries are shown in the hospital scenes. Horses are shot rather than be left for the enemy in the background on the beach scene. Overall, however, the film is more artistic than that of an explicit nature.

What did you think about Atonement? Sound off below…

Our romance-themed entertainment site is on a mission to help you find the best period dramas, romance movies, TV shows, and books. Other topics include Jane Austen, Classic Hollywood, TV Couples, Fairy Tales, Romantic Living, Romanticism, and more. We’re damsels not in distress fighting for the all-new optimistic Romantic Revolution. Join us and subscribe. For more information, see our About, Old-Fashioned Romance 101, Modern Romanticism 101, and Romantic Living 101.
Pin this article to read later! And make sure to follow us on Pinterest.
By Elinor Cackett on April 27th, 2016