Tess of the d’Urbervilles is Hardy’s best-known and most studied novel. Among other things, it challenged society’s treatment of women, especially those perceived to have fallen. Like many novels that criticise a society, it is a tragedy. This makes the film hard to watch at times, but it remains one of the best literary adaptations of Hardy’s work. 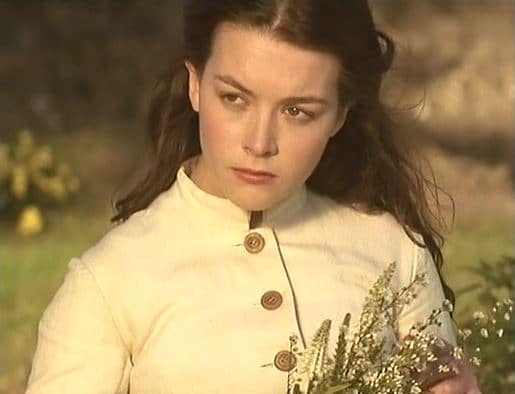 Tess at the May Dance

Tess is the eldest child of a poor country family. One day the parson of their small community mentions to her father that his family is descended from an old but extinct branch of the gentry.  She is sent to claim kin with a well-to-do family that shares the name.  Here she meets a distant cousin who pursues her mercilessly.  After a terrible event befalls Tess, she returns home to her family. Eventually, Tess sets out again determined to seek out happiness and to escape her past. But it may not remain buried for long. 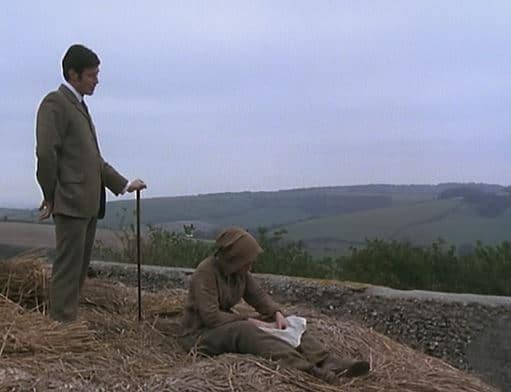 The performances are very strong. Justine Waddell makes a perfect Tess, bringing to life such a complex, tragic character with a great deal of sympathies and emotional depth.  Jason Flemyng as Alec d’Urberville is appropriately sinister and strangely enjoyable to watch despite the nature of his character. Oliver Milburn plays the hypocritical Angel Clare with a deceptive charm.  John McEnery and Lesley Dunlop are both very good as Tess’ short-sighted and deeply flawed parents. 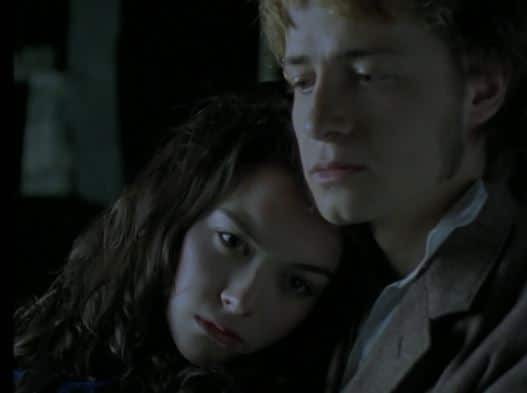 The original score by Alan Lisk is extremely powerful and perfectly elevates the emotion of any given scene.  I would compare it to the opening music in the 2004 adaptation of North and South in terms of emotional rawness. The look of the film is flawless with many beautiful scenes that appear almost to have been directly plucked from the pastoral paintings popular in the 1800’s. This is in part due to the costumes and use of the beautiful English countryside. 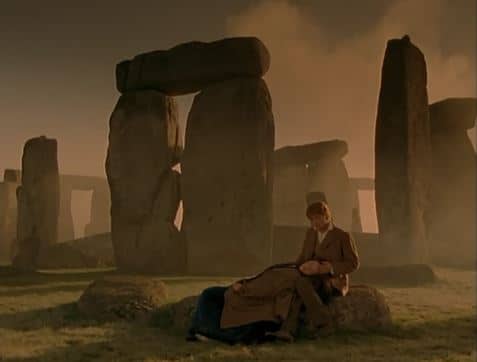 The lovers at StoneHenge

The production adapts the book quite closely taking advantage of its long running time.  The character of Tess, while remaining very relatable, is at times frustrating in her determination to view herself as the sinner and to paint Angel as a good man incapable of wrongdoing. I hesitate to call either of Tess’ time with each suitor a romance given their individual unworthiness of her. They are both too shaped by the attitudes of the time though both men do show glimpses of what might have been if they had seen Tess as a human being instead of a prize or a womanly ideal.

Hardy often is criticised for being overly sentimental. You could certainly argue that this story is a bit extreme in getting its message across. Alternatively you could view it as a beautiful and tragic story of a free-spirited intelligent young woman treated badly by a hypocritical and cold society. Either way it is a good story that has lasted the test of time that never fails to garner sympathy for its misused heroine.

Out of the adaptations I’ve seen, this Tess is the best and truest adaptation. It is an enjoyable production that is beautifully executed with great acting and wonderful music. Some might find the bleakness to be rather off-putting. However, if you don’t mind the tragic aspect of the tale, Tess of the d’Urbervilles is a well told period drama, a good adaptation of a popular classic that is definitely well worth watching.

Our romance-themed entertainment site is on a mission to help you find the best period dramas, romance movies, TV shows, and books. Other topics include Jane Austen, Classic Hollywood, TV Couples, Fairy Tales, Romantic Living, Romanticism, and more. We’re damsels not in distress fighting for the all-new optimistic Romantic Revolution. Join us and subscribe. For more information, see our About, Old-Fashioned Romance 101, Modern Romanticism 101, and Romantic Living 101.
Pin this article to read later! And make sure to follow us on Pinterest.
By Elinor Cackett on September 19th, 2015

4 thoughts on “Vintage Film Review: Tess of the d’Urbervilles – A Beautiful Adaptation”