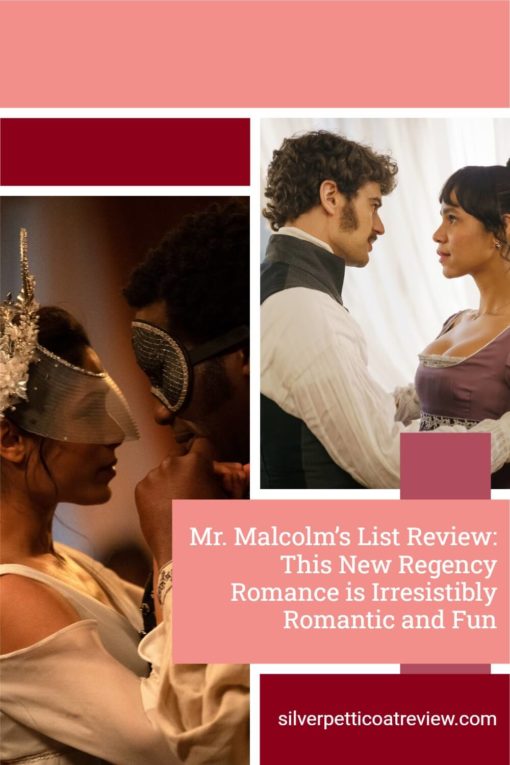 I didn’t know what to expect from Mr. Malcolm’s List – other than I thought it looked funny, romantic, and inspired by Jane Austen. All good things from where I’m sitting.

After seeing it in theaters, I’m happy to say it exceeded my expectations, and I can’t recommend the new movie enough. I laughed and smiled throughout the film and can’t wait to see it again.

RELATED: Why Didn’t They Ask Evans (2022) Review: A Comic Mystery Romance To Love

But before I share my complete review of the film, here is everything you need to know about the hilarious new romantic period drama.

The movie Mr. Malcolm’s List is adapted from a Historical Romance/Regency Romance novel by Suzanne Allain (who also, interestingly enough, wrote the feature-length screenplay based on her own novel).

Here is the official book synopsis:

It is a truth universally acknowledged that an arrogant bachelor insistent on a wife who meets the strictest of requirements—deserves his comeuppance.

The Honourable Mr. Jeremy Malcolm is searching for a wife, but not just any wife. As the target of matchmaking mothers and desperate debutantes, he’s determined to avoid the fortune hunters and find a near-perfect woman, one who will meet the qualifications on his well-crafted list. But after years of searching, he’s beginning to despair of ever finding this paragon. Until Selina Dalton arrives in town.

Selina, a vicar’s daughter of limited means and a stranger to high society, is thrilled when her friend Julia Thistlewaite invites her to London, until she learns it’s all part of a plot to exact revenge on Mr. Malcolm. Selina is reluctant to participate in Julia’s scheme, especially after meeting the irresistible Mr. Malcolm, who appears to be very different from the arrogant scoundrel of Julia’s description.

But when Mr. Malcolm begins judging Selina against his unattainable standards, Selina decides that she has some qualifications of her own. And if he is to meet them he must reveal the real man behind…Mr. Malcolm’s List.

Sounds delightful, right? After seeing the movie, I also plan to read the book to see how the two compare – especially since the author wrote the book and the screenplay.

The trailer focuses on the romantic angle (and yes, it is very romantic), but it is also comical – mainly due to the performances from Zawe Ashton and Oliver Jackson-Cohen.

When she fails to meet an item on his list of requirements for a bride, Julia Thistlewaite (Zawe Ashton) is jilted by London’s most eligible bachelor, Mr. Malcolm (Ṣọpẹ́ Dìrísù). Feeling humiliated and determined to exact revenge, she convinces her friend Selina Dalton (Freida Pinto) to play the role of his ideal match. Soon, Mr. Malcolm wonders whether he’s found the perfect woman…or the perfect hoax.

Mr. Malcolm’s List includes a talented and diverse cast of actors – bringing comparisons to Bridgerton and Hamilton for its color-conscious and inclusive casting. Much like theater, the non-traditional casting of the film focuses on choosing the best actors for the part, and I think that’s fantastic.

Freida Pinto (Slumdog Millionaire) plays Selena Dalton, a clever, Elizabeth Bennet-like heroine who is the daughter of a clergyman. She visits her friend in London only to find herself falling for Mr. Malcolm.

Sope Dirisu (Humans) takes on the part of the Mr. Darcy-like leading man, Mr. Jeremy Malcolm. He’s an eligible bachelor with a large estate (while also being the son of an earl) in search of a wife – but he has a rather extensive (and unrealistic) list of qualifications.

The other prominent players include Zawe Ashton as Julia Thistlewaite, the humiliated young lady and best friend of Selena; Oliver Jackson-Cohen as Julia’s cousin and partner in crime, Lord Cassidy; and Theo James as the swoony Captain Henry Ossory.

All in all, the film has an excellent cast, with everyone giving memorable performances.

And no, that’s not a spoiler. This is a rom-com based on a Regency Romance novel, after all.

Now, while Mr. Malcolm’s List is not a Jane Austen adaptation, it does pull from enough of Austen’s stories to feel like a respectful homage – dialogue and all.

And it is an entirely wholesome story – much like Austen – without any risqué scenes other than smoldering stares, passionate but sweet kisses, and Regency dance numbers.

With elements of Pride and Prejudice, Emma, Mansfield Park, and Lady Susan, it’s hard not to notice the winks and nods.

However, unlike Austen, Mr. Malcolm’s List is more of a romantic comedy set in the Regency Era than social satire, even if you can find a bit of irony and satirical domesticity.

RELATED: Book Review: The Heroine’s Bookshelf – A Great Read For Fans Of Lizzie Bennet, Anne Shirley, And Other Wonderful Heroines!

Allain provides a clever screenplay that is more fun than serious, while the director, Emma Holly Jones, shows potential (I’d be on board for seeing her future films).

Plus, with a strong cast on board, they can enhance what already is a fun, romantic story to higher levels.

And while the film is not as high-budget as some other feature-length period dramas, the script, direction, and performances make up for that.

Julia Thistlewaite and Selina Dalton have been best friends since they were girls but come from different classes.

When Julia becomes humiliated by the bachelor, Mr. Malcolm, during her fourth London season, she decides to get revenge. She sends for her friend, Selina, to transform into his perfect match.

But Julia’s scheme does not go the way she expects because soon, Mr. Malcolm and Selina begin falling for each other.

Meanwhile, Julia begins a flirtation with Captain Henry Ossory (who may also like Selina), while her cousin, Lord Cassidy, just wants everyone to have their happily ever after while he enjoys the good life!

So, it’s all fun and games…until it’s not.

THE PERFORMANCES AND ROMANCE

Ultimately, what makes Mr. Malcolm’s List such a delight is the performances set within such a fun, romanticized version of Regency London.

Everyone plays their part well, from the engaging romance between Selina and Mr. Malcolm (who, let’s face it – takes a while to warm up to because of his silly list) played by Pinto and Dirisu to the comical but endearing performance of Oliver Jackson-Cohen as Lord Cassidy.

RELATED: 100+ of the Best British Period Dramas of All Time to Watch

The standouts for me, however, were Zawe Ashton as Julia and Theo James as the Captain. Julia is an intriguing mix of Mary Crawford from Mansfield Park and Emma with all her scheming!

Sanditon fans will love seeing Theo James in another standout period drama role. Is he a Wickham/Willoughby character? Or a potential love interest?

But for Mr. Malcolm’s List to work, it’s the central love story that must succeed. Thankfully, it does! Numerous swoony moments throughout will please all the romance fans out there.

From the romance to the performances to the thoughtful direction from Emma Holly Jones to the funny script from Allain, to the costumes by Pam Downe and the music by Amelia Warner (who also, interestingly enough, played a young Fanny in the 1999 version of Mansfield Park), Mr. Malcolm’s List is an absolute treat to watch!

Overall, if you enjoy Emma, An Ideal Husband, The Personal History of David Copperfield, or even Austenland, you’ll likely love Mr. Malcolm’s List!

It’s also gorgeous to watch – the movie was filmed entirely in Ireland!

Ultimately, if you go into this movie expecting a good time, you probably will! It’s an uplifting escapist rom-com about true love and friendship and, of course, getting the much-deserved happily ever after.

Mr. Malcolm’s List is currently available to stream on Showtime or rent/buy on Digital and DVD.

Want more of Mr. Malcolm’s List? See the short film (produced by Refinery29) directed by Emma Holly Jones that inspired the feature-length film! It mostly has the same cast except for Gemma Chan, starring as Miss Thistlewaite.

Have you seen Mr. Malcolm’s List? What did you think? Do you agree with my review, or do you have a different take on it? Discuss this in the comments below!