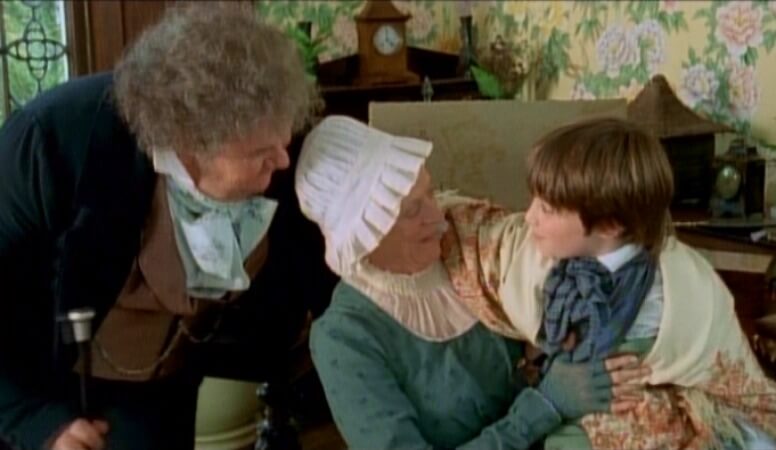 It’s never a dull moment when you step inside the world of Charles Dickens. The nuances and intentional play within the story (the colorful characters framing what is otherwise a dark world, usually for the hero) are always on point. Thought to be one of Dickens’ most autobiographical stories, David Copperfield is also said to be his favorite. Or that’s what the closing commentary epilogue of this DVD (hosted by Russell Baker) reveals. David wasn’t the only orphan Dickens empathetically wrote about, but he is one of my favorite characters.

Though most of us know the iconic Dickens story, let’s meet the characters and the people who play them. A young David Copperfield (Daniel Radcliffe) lives a happy childhood with his mother (Emila Fox). His father died before he was born and his father’s aunt, Betsey Trotwood (Maggie Smith) left in disgust when David was born a boy rather than a girl. But lurking around the corner is a dark shadow in the form of Edward Murdstone (Trevor Eve). Charming the young widow, it isn’t long before Clara and Murdstone are married, shortly followed by the arrival of his sister, Jane Murdstone (Zoë Wanamaker). A cruel, demanding woman, she takes over the household duties stripping Clara and her loyal servant Peggotty (Pauline Quirke) of their duties. Before long, Clara dies to leave David an orphan and thrust into the streets as a factory worker. 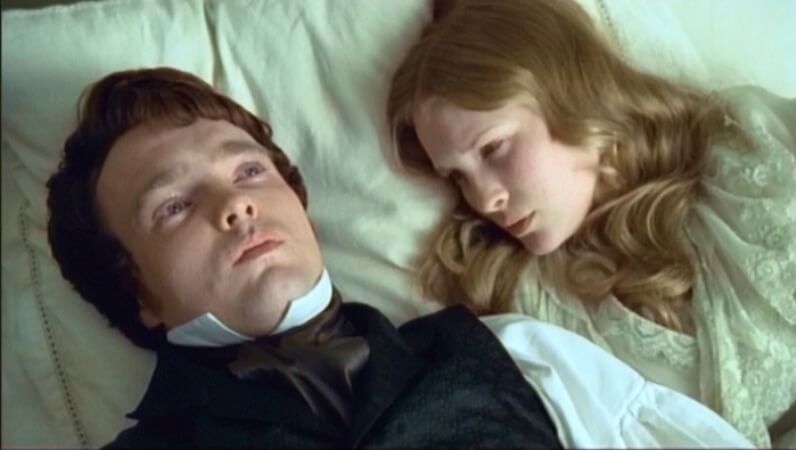 Time passes, and eventually, David reunites with his Aunt Betsey who raises him and arranges for the best education money can buy. As a young man about to start out in the world, David (Ciaran McMenamin) reacquaints himself with his school chum, James Steerforth (Oliver Milburn); meets the beautiful Dora Spenlow (Joanna Page) whom he marries; and through it all, relies on the constant presence of his childhood friend and “sister,” Agnes (Amanda Ryan).

Additional to the main players, familiar faces will be spotted in the talents of Cheri Lunghi, Ian McKellen, Bob Hoskins, Carl Johnson, Alun Armstrong, Dawn French, and many more. This 1999 PBS Masterpiece adaptation follows the same general timeline as the Hallmark Entertainment adaptation (2000) with the exception of one difference. This version of David Copperfield doesn’t give David or the audience the emotional release or the chance to see him tell off his stepfather, whereas the 2000 miniseries does. In some ways, it doesn’t really matter because Hugh Dancy’s David is a much “moodier” character than the young actor playing David in this Masterpiece Theatre version.

Every time I watch David Copperfield, I’m surprised by the lack of time spent on David’s adult years. It feels just as important (strictly speaking of the adaptations since the book isn’t familiar to me) to explore his early years as it does his latter. Still, I often cannot help but wish things would fast-forward or move a touch quicker. It’s been years since I watched this version and I always thought, overall, I preferred this one. But of the two adaptations I enjoy re-watches of (this and the 2000 miniseries), I have to confess that I think Hugh Dancy is the superior David. He gives more layers to David than Ciaran does. That being said, the entire cast of this adaptation is phenomenal. I’m always impressed with the cast these BBC productions ensemble. They have the ability to charm us, make our skin crawl and redeem themselves, all in a single glance. 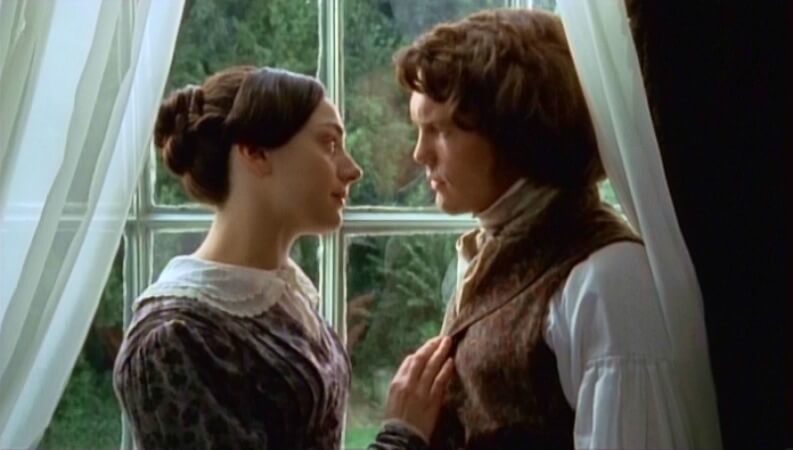 What I do like best about this two-part adaptation is the ending. It might not be as romantic as its peer, but it does give the audience a wonderful sense of completion and brings the entire story full circle. The costumes are pretty, which is a given and I liked again meeting up with the antics of Mr. Micawber or better know the kind-hearted and good Agnes Wickfield. Fortunately, all of these happy events do come to pass; we simply have to sit through about 60-80 minutes of David’s childhood first. All of which has its high points too. Not only will Harry Potter fans enjoy seeing Radcliffe as young David, but if you’re anything like me, you’ll love seeing Maggie Smith (Downton Abbey) play a huge role as well.

In the end, this David Copperfield is a lovely adaptation of a timeless classic. Costume drama aficionados will enjoy seeing so many familiar faces in new surroundings. Those of us who don’t mind a darker bent on period drama (which all of Dickens adaptations are) should add this to our “must watch” list. In the spectrum of Dickens stories, this is one of the “happier,” and best of all, this 3-hour classic will leave you with a smile.

Content note: A few scenes show David being abused, but beyond that (and it’s generally mature themes), there is no content to note. David Copperfield is rated TV-PG.

Have you seen this adaptation of the Dickens classic? Which version of David Copperfield is your favorite? I’d love to read your thoughts!

You can buy this miniseries on Amazon Video for a relatively inexpensive cost.

Our romance-themed entertainment site is on a mission to help you find the best period dramas, romance movies, TV shows, and books. Other topics include Jane Austen, Classic Hollywood, TV Couples, Fairy Tales, Romantic Living, Romanticism, and more. We’re damsels not in distress fighting for the all-new optimistic Romantic Revolution. Join us and subscribe. For more information, see our About, Old-Fashioned Romance 101, Modern Romanticism 101, and Romantic Living 101.
Pin this article to read later! And make sure to follow us on Pinterest.
By Rissi JC on May 24th, 2016