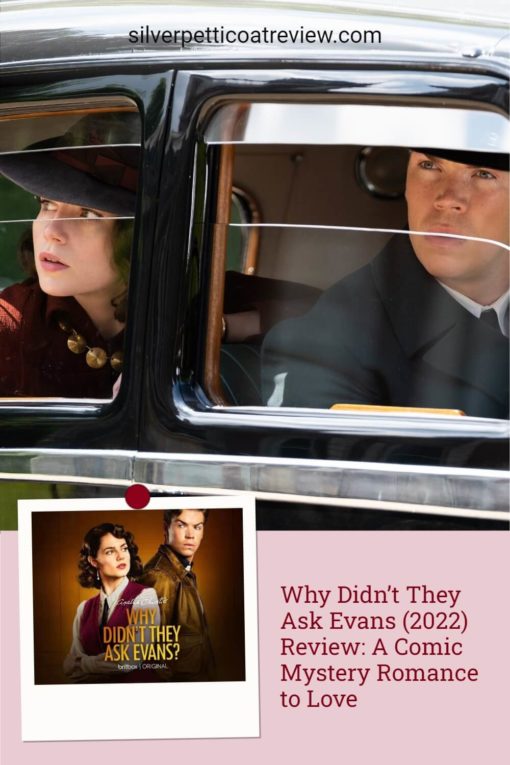 A comic mystery romance, the latest Britbox original, Why Didn’t They Ask Evans? is unabashedly romantic and old-fashioned in the most entertaining of ways.

An adaptation of a 1934 Agatha Christie novel, Why Didn’t They Ask Evans? (2022) is refreshingly light, unlike other recent dark Christie interpretations (Death of the Nile comes to mind).

With an intriguing mystery, witty banter between our leads, and fun direction from Hugh Laurie (House), Why Didn’t They Ask Evans? is a period drama delight.

When you watch the trailer, you can see a taste of why I absolutely loved this limited romantic mystery series!

Agatha Christie’s wittiest mystery ever. Lucy Boynton and Will Poulter star in Hugh Laurie’s new adaptation, where two amateur sleuths set out to find the meaning behind a dead man’s mysterious final words.

You can watch the mystery series on Britbox by clicking here.

While searching for a lost golf ball on a golf course, Bobby Jones (son of the local vicar in a small Welsh town) accidentally stumbles onto a dying man at the bottom of a cliff, a man with enough of a final breath to ask, “why didn’t they ask Evans?”

It’s the cryptic question of the hour, a question of no seeming importance until Bobby Jones’s life is in danger based on what he witnessed – especially after finding a mysterious photograph of a beautiful young woman inside the dead man’s pocket.

Indeed, mysterious and suspicious individuals start showing up around town asking questions, and no one is safe. Not Bobby or Lady Frankie Derwent.

From there, the story follows the young man, Bobby, and his vivacious companion, the socialite and pants-wearing Lady Frances, otherwise known as Frankie, as they attempt to solve the murder together, a murder that puts these sleuths in the middle of an adventure, mortal danger, and a conspiracy where they don’t know who to trust but each other.

Thankfully, Frankie (aka socialite Lady Frances) strives for danger and excitement! But will the two amateur detectives find the murderer before it’s too late?

Will Poulter and Lucy Boynton take on the lead roles as the appropriately named Bobby Jones and the clever Lady Frances Derwent.

Unlike other Agatha Christie stories, romance is at the forefront of the series. Indeed, the entire premise of the Why Didn’t They Ask Evans adaptation is about the sparks between Frankie and Bobby.

In fact, Hugh Laurie focuses his direction almost like a 1930s classic screwball comedy starring Katherine Hepburn and Cary Grant. While the murder and mystery are essential, it’s the relationship and witty repartee between the leads we stay for.

Indeed, the chemistry between Lucy Boynton (Frankie) and Will Poulter (Bobby) is fabulous. Lucy Boynton (who also played a young Margaret in Sense and Sensibility) is a particular standout here.

Boynton plays Frankie with intelligent flirtiness and wit. She’s likable, and you’ll want to root for her happy ending with her childhood friend, Bobby.

RELATED: Miss Scarlet and the Duke Season 2: Everything We Know So Far

For Frankie, it’s of no importance that Bobby isn’t from the same high society as she is, although there is a slight hesitancy because of the class difference. Bobby just needs to realize Frankie is 100 percent ready for a real relationship.

She’s even willing to put herself in danger by going undercover amid a suspicious family for him!

While the mystery never takes a backseat, the romance between Bobby and Frankie is as captivating as the rest of this fun adaptation.

Not to mention, the series stays refreshingly true to the book (unlike the strange Miss Marple version of the story).

Why Didn’t They Ask Evans Review: Our Overall Thoughts

With wit, romance, a juicy mystery, a beautiful setting, and genuinely likable plucky sleuths, Why Didn’t They Ask Evans? is a rollicking good whodunnit.

While the press for this underrated mystery show went under the radar, it is still well worth checking out.

Plus, while the leads are great, there are other fantastic cameos in the series, including big names like the always-amazing Emma Thompson and Jim Broadbent.

Not to mention, Hugh Laurie plays an important onscreen role as well.

Overall, take an Agatha Christie (the queen of crime) murder mystery, mix in some 1930s screwball romantic comedy elements with a touch of Jane Austen, add a delightfully witty script, and you have Laurie’s lighthearted mystery series, Why Didn’t They Ask Evans? It’s an enjoyable crime-solving adventure with the perfect dose of romance on the side.

In short, if you love romantic mysteries, you’ll love investigating with Frankie and Bobby as they slowly unravel the mystery of why didn’t they ask Evans?

It truly is a delight; one can only hope Laurie directs more period drama mysteries.

Why Didn’t They Ask Evans? is exclusively available to stream on Britbox or the Britbox Amazon Channel. There are about three hour-long episodes.

Did you watch Why Didn’t They Ask Evans? What did you think of the latest Agatha Christie adaptation? Let me know in the comments!

You can read more of our reviews here (including other TV shows).

1 thought on “Why Didn’t They Ask Evans (2022) Review: A Comic Mystery Romance to Love”