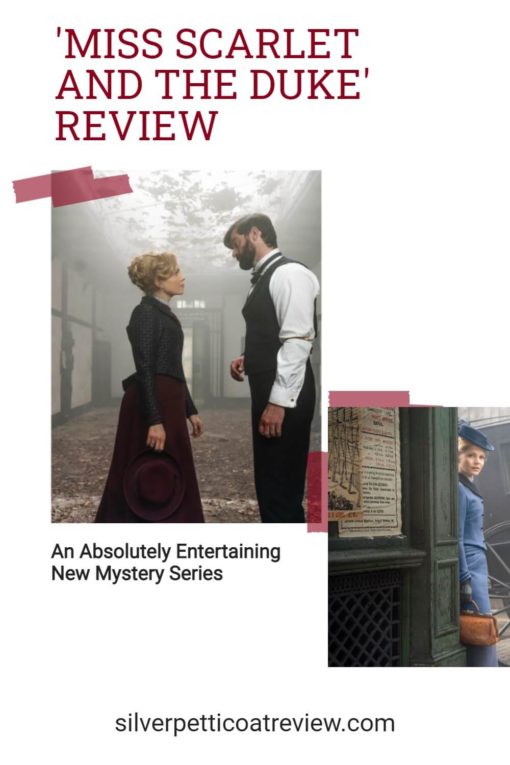 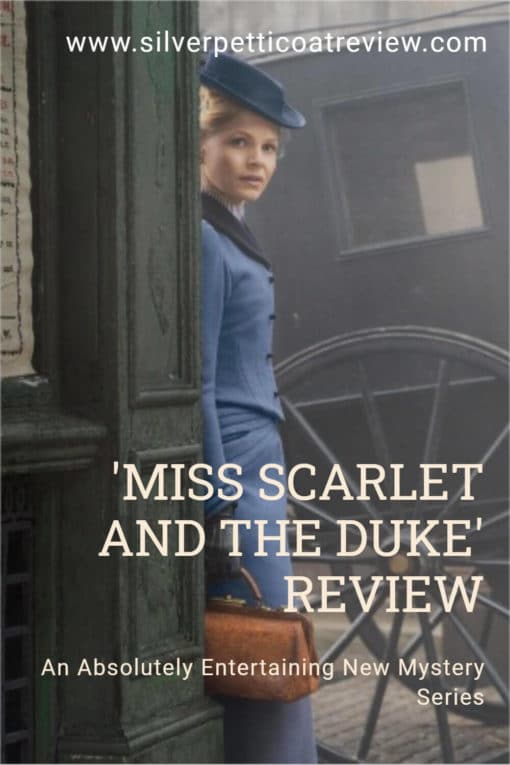 MISS SCARLET AND THE DUKE REVIEW

Miss Scarlet and the Duke makes for a refreshing twist on the female private detective in period costume. While Sherlock Holmes reigns supreme in Victorian London detective stories, Eliza Scarlet is a welcome addition – solving crimes in a fresh way.

Plus, the will-they/won’t they dynamic between Miss Scarlet and the Scotland Yard Inspector, ‘The Duke’ mixed with entertaining crimes of the week and an overarching mystery make for a compelling new series. And thankfully, it is already renewed for season two.

When Miss Eliza Scarlet’s private detective father dies mysteriously, she begins investigating to uncover the truth. Meanwhile, she takes over her father’s business even though she’s a woman no one takes seriously – including William’ The Duke’ Wellington, the man her father trained when he was an Inspector for The Scotland Yard.

Miss Scarlet begins helping ‘The Duke’ solve crimes, much to his annoyance, while trying to build up her business and avoid romantic entanglements.

The crimes of the week blend perfectly with the season’s mystery and will have you hooked from start to finish.

While the chemistry between Phillips and Martin sizzles onscreen and they have a clear romantic dynamic, it is obvious from the start the romance aspect of the series will be a slow burn. The two have known each other for years and even have a romantic history (they’ve kissed before), and moments throughout series one hint toward a future romance between them.

But there are still miles to go before these two prideful characters ever even admit they like each other. Eliza likes her independence, and The Duke is both frustrated and invigorated by Eliza.

So, if you’re looking for a bunch of swoony romantic scenes a la Miss Fisher, this show isn’t that. However, if you appreciate the cerebral and intellectual equality between the pairing and hints of a possible romance, then you’ll appreciate the brewing love story.

Besides Eliza and The Duke, a few of the other characters include Rupert Parker, a wealthy young man who becomes both a friend, confidante, and investor of Miss Scarlet’s. He adds to the series’ dynamic nicely as he tries to both please and avoid his matchmaking mother. Then there’s Kevin Doyle (Downton Abbey) as Miss Scarlet’s father – shown in flashbacks and through imagined scenes when she has conversations with him.

More than romance, Miss Scarlet is driven to succeed and make her father proud – especially now that he’s gone.

Another intriguing character is Moses – played by Ansu Kabia. He is a criminal and associate of Miss Scarlet’s, and has questionable motives. His character always brings an exciting dynamic to the series, and it’s fun to watch his character evolve.

With intelligent, witty dialogue, captivating mysteries, excellent character work with a riveting performance from Kate Phillips, this is a must-watch series if you enjoy period dramas or British mystery shows.

Besides the clever writing, the production is high quality with excellent production design, gorgeous costumes, and atmospheric cinematography fitting to the Victorian time.

Overall, Miss Scarlet and the Duke brings something new to Victorian Detective stories. It’s a thrilling ride full of mystery, suspense, and the hint of romance – making for a new show that’s sure to become a period drama favorite quickly.

Did you watch Miss Scarlet and the Duke? Do you agree with our review of the PBS mystery series? Discuss in the comments below.