WHERE: BBC One (now airing in the UK); BBC America

WHEN: Premieres in America June 13th.

With magic long since lost to England, two men are destined to bring it back; the reclusive Mr Norrell and daring novice Jonathan Strange. So begins a dangerous battle between two great minds. 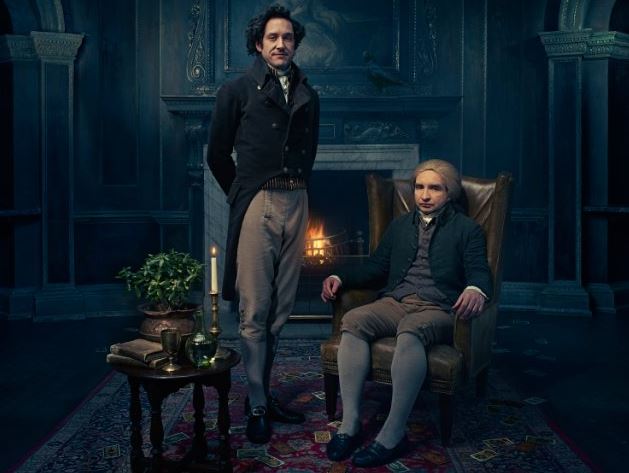 Jonathan Strange & Mr Norrell is one of my favourite books in the world. Set in the early 19th century, in an alternate England whose northern half was once ruled by a magician-king, and which was once rife with magic, it tells the story of two gentleman-magicians who seek to bring that magic back. Their friendship and rivalry – and the secrets they keep from each other – soon begin to affect those around them, and to put them in deadly peril.

It has now been adapted by the BBC into a seven-part TV drama, which began showing in the UK on Sunday, 17th May. As a fan of the book, I was both excited and nervous about the adaptation. Would it do justice to the book? (The original novel by Susanna Clarke is incredibly detailed. Not only does it run to 782 pages, but it also has extensive footnotes, giving the impression of a real and scholarly history). Would the beloved characters be altered beyond recognition? Would adaptation to drama cause the story to lose its warm, cosy feel, that makes it such an ideal book to snuggle up with on a winter’s evening?

I needn’t have worried. From the opening scene – of poor, hapless Mr Segundus trying to cast a spell, then facing the pomposity of the Learned Society of York Magicians – it was obvious that this was an adaptation by people who love the book as much as I do. The settings and costumes showed a loving attention to period detail, and conjured up (excuse the pun!) a Regency world with the dark, charcoally feel of Portia Rosenberg’s wonderful illustrations for the book.

The first episode managed to introduce all the main characters, all of whom were instantly recognisable. Mr Norrell, shriveled and nervous beneath his wig.  His servant Childermass, insolent and thoroughly Yorkshire, like Heathcliff with a pack of tarot cards. Jonathan Strange, haphazard and devil-may-care, while trying to convince his future wife he means to get a proper occupation. Vinculus the street magician, wild, mystical and in need of a bath. And the Gentleman with the Thistledown Hair, for now something of an enigma.

Most of the characters both look and act exactly as they do in the book. One or two – the consummate dandy Drawlight, for example – look different but are still instantly recognisable. If I have one complaint about the character design, it is that Jonathan Strange and Drawlight’s friend Mr Lascelles appear to have swapped hair colours. So in the TV version, Lascelles is a redhead, while Strange has brown hair. I find this rather prejudiced, as if to suggest that a redhead cannot be a leading man (whereas I always thought Jonathan’s red hair to be an intrinsic part of him).

I was particularly excited to see the scene in York Minster with the talking statues, as this is one of my favourite scenes in the book. The scene was filmed in the Minster itself, and as a proud Yorkshire woman, I enjoyed seeing other scenes from my native county. But I look forward to the locations to come in the rest of the series, as the story takes us from Yorkshire, Shropshire and London to Venice, the battlefields of the Napoleonic Wars, and several much stranger locations, where sensible humans fear to tread.

I’m very glad now that this was made into a TV drama rather than a feature film. According to a British Film Institute interview with the cast and crew (https://youtu.be/AbJNex59lVk), the rights to the book were originally acquired by New Line Cinema (Lord of the Rings). But to make the story suitable for cinema release, it would inevitably have been changed much more than is necessary for a TV series. As it is, the writer and director have done a wonderful job of condensing the plot into an hour-a-week show, in a way that makes sense to people (like my husband) who wouldn’t dream of tackling the book, while hinting at the wider world of the book, for fans like me.

Remains to be seen…

Our romance-themed entertainment site is on a mission to help you find the best period dramas, romance movies, TV shows, and books. Other topics include Jane Austen, Classic Hollywood, TV Couples, Fairy Tales, Romantic Living, Romanticism, and more. We’re damsels not in distress fighting for the all-new optimistic Romantic Revolution. Join us and subscribe. For more information, see our About, Old-Fashioned Romance 101, Modern Romanticism 101, and Romantic Living 101.
Pin this article to read later! And make sure to follow us on Pinterest.
By Elizabeth Hopkinson on May 28th, 2015