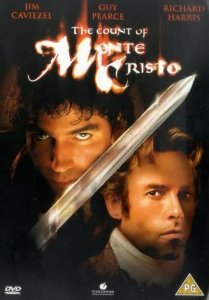 The year was 2010. I had just finished reading Alexander Dumas’ epic masterpiece The Count of Monte Cristo for the first time and, although I loved the book and would still consider it one of my favorites today, I found myself less than enchanted with the ending. Dumas usually does endings so well, so I was surprised and disappointed.

Then, later that same year, I saw this film. Everyone had warned my class that the book and the movie were extremely different and that we would be disappointed if we watched it, but I wanted to watch it anyway. There were some things that were annoying (like the amount of time spent in prison and a few other details), but I loved the way it packed a monster of a book into a two-hour film that still managed to convey the spirit of the novel.

Even though some of the subplots were removed, the same sense of revenge, the fight for justice on an epic scale, the plotting and the betrayal all still come shining through. I think this comes partially from the acting by Guy Pearce, brilliantly conniving and slimy as Fernand Mondego, and from the way he and Jim Caviezel portrayed the friendship (and later enemy-ship) between the two men.

Of course, a large part of the credit for making this movie great must go to Jim Caviezel in his role as Edmond Dantes, the Count of Monte Cristo himself. Caviezel is able to play the wide-eyed and innocent Edmond, the cynical and angry prisoner and the vengeful and hate-filled Count. The range of emotion that the Count has to go through in the 16 years portrayed in the film is truly amazing to watch.

Dagmara Dominczyk plays Mercedes, Richard Harris plays Abbe Faria and a young Henry Cavill plays Albert Mondego. The other characters are also brilliantly cast, giving life and emotion to characters that I had already grown to love; they came dancing off of the pages and I loved that.

Now, the film itself. The year is 1814. Napoleon has been exiled to the island of Elba and the British are determined that he not escape. Of course, the young and idealistic Edmond Dantes and his ship find themselves in the area of Elba when the captain takes sick. Fearing the death of his superior, Edmond risks his life (and that of his best friend, Fernand Mondego, who insists on going with him)  to get his captain to medical attention.

Fernand and Edmond prove to be a good team as they fight on Elba, and the knowledge that they have been friends for years makes their friendship seem sincere. Napoleon tells Edmond that he has a secret letter for a friend and asks him to deliver it for him in secret, which Edmond reluctantly agrees to.

The opening scene tells us, basically, everything that we need to know about our hero. He is idealistic, loving, loyal, and he tries to always see the best in everyone. Is this really a character flaw? No, not at all, but in Edmond’s case, it opens up the door to some serious problems.

Of course, when the ship arrives in Marseille we discover that not everything is happy in Edmond’s life, although he, himself, is happy. You see, Edmond has a fiancé who also grew up with the boys: Mercedes. She and Edmond are in love and Fernand is jealous of that. For his bravery, Edmond is made a captain, and Fernand is jealous of that as well.

The first mate, Danglars, and Fernand begin talking about Edmond. Here, the audience learns that Fernand saw the conversation between Napoleon and Fernand is, in addition to jealous about the other things, also is hurt by what he sees as a betrayal – Edmond not confiding in him.

The two turn Edmond into the Magistrate. Although it is apparent that he is innocent, Edmond is caught up in the schemes of the jealous and the ambitious as the prosecutor sends him to the Chateau d’If, the place where, as the Warden says, only the innocent actually go.

For thirteen years, he is there, kept alive by hate. For the first four years, he counts the rocks in his cell and maintains the carving that reads “God will give me justice.” Edmond begins to lose hope until another prisoner pops his head into his cell, the Abbe Faria.

Faria is trying to dig his way out and offers to teach Edmond everything he knows in exchange for Edmond’s assistance. The next nine years pass by in a blur, as the two men dig and Edmond learns economics, politics, languages, reading, writing, and swordplay, to name a few skills.

An accident results in the death of Faria, but this gives Edmond the opportunity to escape, taking with him a map that the priest has hidden all these years that leads to the location of the amazing treasure of Spada. He tells Edmond to use the treasure for good and reminds him that it doesn’t matter if he believes in God, He believes in him. There is more to live than revenge, he says, a lesson that a hate-filled Edmond does not want to hear.

When Edmond, older, wiser, and very jaded, finally returns home (he spent some time with smugglers, making valuable friends), he learns that things have changed quite a bit. His father is dead, Danglars took over the shipping business from Morrell, Villefort was promoted, Fernand became count, and Mercedes married Fernand a month after Edmond was arrested.

Brokenhearted, but armed with the unbelievable resources of the treasure of Spada and the assistance of his man Jacopo and his smuggler friends, Edmond fashions himself a new name and identity, that of the Count of Monte Cristo, and begins to plot out revenge against the men who ruined his life.

The plot is beautifully orchestrated. The first half of the film sets up Edmond’s back story and how he became the Count while the second half is focused on watching his plans unfold. Although the audience really isn’t given too many specifics about his plans, this keeps the plot moving and lets us keep guessing. It’s clever and fun that way.

The romance between Edmond and Mercedes is believable and really quite lovely. We first meet them as young idealist young people and later, Mercedes is the only person who can see Edmond in the Count. Her reaction tells the audience (and him) that she never stopped loving him and that the past sixteen years have been hard for her as well. When they meet again later, they are both older and more world-weary; her having suffered through a terrible marriage and him having suffered through a horrific prison experience.

Their romance is a nice contrast to the revenge plot; their love is something that is at odds with Edmond’s desire for revenge and Caviezel plays the conflicted Edmond wonderfully. Mercedes is the only one that can remind Edmond that there is more to life than revenge and that love also is worth living for, a role that Dominczyk plays beautifully, showing the love and faith of Mercedes in her interactions with other characters. Unexpected, moving and almost tragic, this love is still shown as true love, something that she held on to all her life and that he secretly carried as well.

Romance-wise, the ending of this film is basically what I wanted when I got to the end of the book. I remember getting to the end of the book and being very unsatisfied with the ending I got. This film is able to weave the romantic subplot throughout the book without overwhelming the main plot of revenge, rather, it enhances it and makes you  believe in true love and it’s power to conquer everything else.

Although the ending of the film can be called a tad cheesy and predictable, it was also a very satisfying, both romantically and overall. The way the screenwriters tied everything together and made all the pieces fit at the end caused me to forgive those issues that I had had with the film at the beginning.

This film is one of my favorites, and one that needs to be looked at independent of its source material. Both are classics with the same basic plot, but they tell the story in different ways. Overall, there is swashbuckling action, adventure, romance, betrayal, beautiful clothes, an amazing score, and tons of brilliant one-liners. I think it’s a truly wonderful film.

Our romance-themed entertainment site is on a mission to help you find the best period dramas, romance movies, TV shows, and books. Other topics include Jane Austen, Classic Hollywood, TV Couples, Fairy Tales, Romantic Living, Romanticism, and more. We’re damsels not in distress fighting for the all-new optimistic Romantic Revolution. Join us and subscribe. For more information, see our About, Old-Fashioned Romance 101, Modern Romanticism 101, and Romantic Living 101.
Pin this article to read later! And make sure to follow us on Pinterest.
By Bailey Cavender on September 26th, 2015