I am Dragon – What It’s About

I accidentally discovered I am Dragon while browsing through Amazon Prime. At first glance, I am Dragon appears like just another B film to skip. However, upon a closer look, I realized I am Dragon is actually this beautiful Russian import period fantasy. I watched the Beauty and the Beast like film instantly and fell in love with everything: from the unique mythology, the super gorgeous dragon, to the old-fashioned romance. Together, let’s bring I am Dragon out of the secret shadows and share it with the world. This film (which bombed in Russia) needs an audience!

In I am Dragon, a fierce dragon used to rule the land, stealing the female sacrifices freely given to keep order. Then, one day, a man defeats the dragon to save the woman he loves. Years later in more peaceful times, Princess Miroslava still plays with dragons and believes in fairy tales. But it’s time to put away such silly things when she is promised in marriage to the descendant of the dragon slayer, Igor (who, as it turns out, isn’t as nearly brave and noble as his ancestor).

Dressed in her wedding gown, she is put out on the water. The ceremony echoes the ancient custom when young beauties were sacrificed to the beastly dragon. Soon, the ancient ritual song soars through the land, awakening a sleeping dragon.  In surprise to the entire village that believed the dragons were no more, the princess is kidnapped before her marriage in some truly gorgeous shots and CGI work (all without a huge budget). 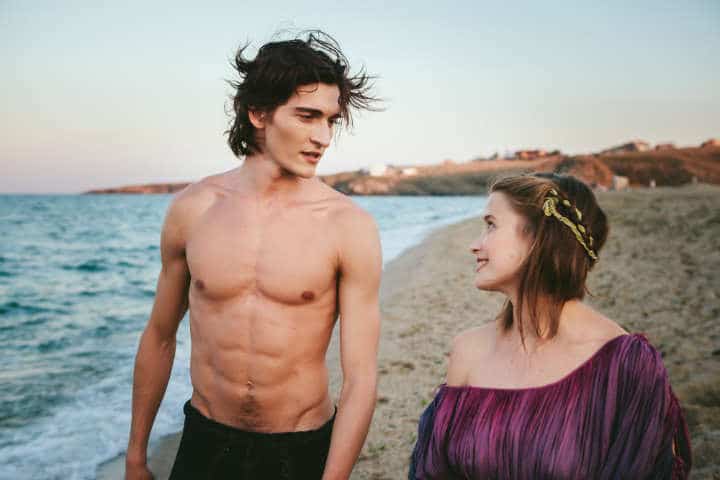 In captivity, she meets a mysterious man named Arman who keeps his distance. It’s not long before Miroslava realizes that Arman IS the dragon and he is trying to keep the beast at bay and keep her from harm. He never wanted to transform into the dragon but the song was too irresistible, awakening something more primal in him.

As the two begin to know one another, of course, love blossoms in this beauty and the beast tale (the structure is very close to the literary story). She feels drawn to the dragon and to the man. Yet, she fears him at the same time. And as Igor comes closer to discovering the secret island hidden in mist and fog, Miroslava begins to question whether she wants to be found at all. But will love prevail in the end of this fairy tale?

I am Dragon isn’t perfect and some may be put off by the YA feeling teen romance. I, on the other hand, thought the love story was sweet. The two leads have a magnetic chemistry because both actors play their parts well. I believe Arman is both man and dragon because of his fierceness and empathy for humans at the same time. And Miroslava really captures an innocent beauty that we believe could fall in love with a beast that longs to kill her. Overall, give this one a chance. After a while, you’ll barely notice the subtitles and just become entrenched in this romantic period fantasy. It’s a Game of Thrones type movie (the colors are similar) without the explicit content and with an epic romance. Not to mention, a truly beautiful looking dragon. Check it out.

Where to Watch: Amazon Prime and DVD.

Our romance-themed entertainment site is on a mission to help you find the best period dramas, romance movies, TV shows, and books. Other topics include Jane Austen, Classic Hollywood, TV Couples, Fairy Tales, Romantic Living, Romanticism, and more. We’re damsels not in distress fighting for the all-new optimistic Romantic Revolution. Join us and subscribe. For more information, see our About, Old-Fashioned Romance 101, Modern Romanticism 101, and Romantic Living 101.
By Autumn Topping on April 23rd, 2018