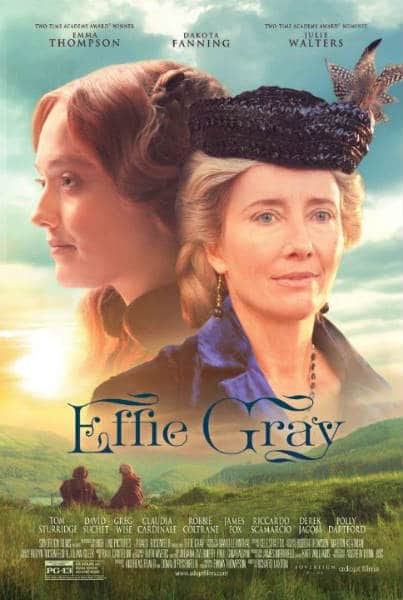 Penned by Emma Thompson (she won the Academy Award for adapting Sense and Sensibility; Effie Gray marks her first original screenplay), and directed by the BAFTA nominated Richard Laxton, Effie Gray is one of the best period dramas in the last few years.

Effie Gray tells the real-life story of Euphemia “Effie” Gray and her marriage to the famous critic John Ruskin (Greg Wise – you may remember him as the wicked Willoughby). They had known each other since she was a child – he, in fact, wrote her a fairy tale (that is published and you can read) when she was only 12-years-old. When she was 19, they were married. However, Ruskin refused to consummate the marriage for somewhat ambiguous reasons. Effie, hurt and confused, becomes more isolated, anxious and depressed the longer she’s married to him. She also finds herself oppressed by Ruskin’s controlling mother played by the always brilliant Julie Walters.

Effie ultimately befriends and turns to Lady Elizabeth Eastlake (played wonderfully by Emma Thompson) for help while also spending time with John Everett Millais (Tom Sturridge) – an up and coming artist and one of the founders of the Pre-Raphaelite brotherhood who is painting her husband’s portrait.

The two fall in love with each other but do not act on their feelings. Millais can’t bear to watch how Ruskin treats his wife – who’s health is deteriorating (her hair even falling out in clumps due to her anxiety). That is until Effie decides to defy convention and fight for her freedom.

While there’s no definitive answer on what exactly transpired between Gray and Ruskin, there’s enough on historical record (Ruskin, Gray and Millais were not completely silent on the matter) to argue plausible theories. The film takes a subtle, albeit likely stance that Ruskin did not approve of Gray’s nude figure, perhaps spending so much time idealizing classic Roman and Greek statues that he didn’t like what he saw when he saw the real thing. Women have never been able to live up to completely unrealistic expectations of what their body should look like.

Historically (because I find this fascinating and want to share) this is what Effie Gray herself had to say on the matter:

“…For days John talked about this relation to me but avowed no intention of making me his Wife. He alleged various reasons, hatred to children, religious motives, a desire to preserve my beauty, and finally this last year told me his true reason (and this to me is as villainous as all the rest) that he had imagined women were quite different to what he saw I was, and that the reason he did not make me his Wife was because he was disgusted with my person……then he said he would marry me when I was twenty five. This last year we spoke about it, he then said as I professed quite a dislike to him that it would be SINFUL to enter into such a connection, as if I was not very wicked I was at least insane and the responsibility that I might have children was too great, as I was quite unfit to bring them up…”

And this is what John Everett Millais had to say to Mrs. Gray (Effie’s mother) when rumors began to spread about him and Effie:

“I should never have written to your daughter had not Ruskin been cognisant to the correspondence and approving of it or at least not admitting a care in the matter. If he is such a plotting and scheming fellow as to take notes secretly to bring them against his wife, such a quiet scoundrel ought to be ducked in a mill pond……The worst of all is the wretchedness of her position, wherever they go to visit she will be left to herself in the company of any stranger present, for Ruskin appears to delight in selfish solitude. Why he had the audacity of marrying with no better intentions is a mystery to me. I must confess that it appears to me that he cares for nothing beyond his mother and father, which makes the insolence of his finding fault with his wife (to whom he has acted from the beginning most disgustingly) more apparent.”

You can read more from The Perthshire Diary HERE.

The film also makes the argument that perhaps he saw Effie as unclean and immoral – though she was still a virgin. Thompson’s interpretation presents Ruskin as a hard figure – perhaps too controlled by his overbearing parents (especially mother) – who treats Effie with cruelty and emotional abuse.

There’s also the subtle innuendo that Ruskin could have been attracted to young girls. In the film, he becomes friendly with Sophie, Effie’s younger sister. Effie also brings up memories of the two of them together when she was a young girl (as Thompson uses some creepy metaphors) – which could be interpreted by viewers in quite a disturbing way. In history, Ruskin did later fall in love with Rose La Touche – who was only ten-years-old when he first developed feelings.

So, Thompson’s interpretation (though very subtly hinted at) is a very possible and even likely theory – even though this is a fictionalized dramatization of events. In other words, it’s possible (thankfully the film doesn’t outright make this accusation opting for subtlety instead) Ruskin was attracted to girls and not women because of their purity – though it seems unlikely he ever acted on these feelings.

While some may find Thompson and Laxton’s take on the material to be overly feminist, I found it refreshing. There was also quite a bit of comparison to fairy tales – Ruskin did write Effie one after all. Effie is the “princess” or “heroine” who has to overcome all odds to find her happy ending. This was a lovely take on Effie, Ruskin and Millais because the fairy tale addition brings out themes used in many of these stories which works beautifully both metaphorically and literally in the film. This isn’t just Effie’s story, however, as the fairy tale comparisons can be representative of many women (or anyone really) who feel entrapped.

Emma Thompson and Richard Laxton also smartly tap into what makes period dramas as a genre so compelling. There are the layered female characters real women can relate to, some smoldering (Tom Sturridge as Millais pulls off the romantic longing stares with ease), genuine romance based on soul connections rather than lust (the touch of a hand is more epic than a sex scene), an authentic look into another time and more. With picturesque scenery (especially when they visit the Scottish Highlands) and gorgeous costumes as well, there’s a lot to love in Effie Gray.

I also loved how the film used some of Millais’ work to visually tell the story and reveal the emotional distress of Effie. You can see this in the film with the repeated use of “Ophelia,” one of Millais’ most famous paintings.

The only real criticism I have for the film was the odd choice to not have Fanning do a Scottish accent. Still, her accent works as a British accent and is not distracting. Her feelings of claustrophobia, anxiety and depression are shown marvelously by Fanning. You feel her entrapment and intense anxiety, making Gray quite a relatable figure. There is some sympathy presented for Ruskin, but overall, this is Gray’s story who is presented as the victim, the princess trying to fight off the evil dragons. Eventually, she married Millais and they had eight children together. So, in a way, Effie got her happily ever after. Ruskin remains somewhat mysterious.

If you love historical period dramas, art history, the Humanities or literature, this is a definite must see. Some may find it slow if you’re looking for a lot of action, or if you are expecting the famous men in the story to take front and center. I appreciated that we are being told the story from Effie’s perspective. You also don’t have to necessarily agree with this interpretation of events to enjoy it. This is one theory – and it’s a compelling one to watch – even if it is not exactly what happened (though it could be). The film is rather good as a standalone story. The writing is excellent – Thompson knows how to write period dialogue better than most, the performances all amazing, the scenery beautiful and the costumes authentic. Effie Gray is a film I recommend for period drama lovers everywhere. Effie Gray can be bought on DVD, however, it does not play on most DVD players in the U.S. It is hard to say when and if this film will be released in America. Still, if you can find a way to watch it, it’s worth trying to get a copy.

Content Note: This is PG-13 and does include some sexual situations.

Our romance-themed entertainment site is on a mission to help you find the best period dramas, romance movies, TV shows, and books. Other topics include Jane Austen, Classic Hollywood, TV Couples, Fairy Tales, Romantic Living, Romanticism, and more. We’re damsels not in distress fighting for the all-new optimistic Romantic Revolution. Join us and subscribe. For more information, see our About, Old-Fashioned Romance 101, Modern Romanticism 101, and Romantic Living 101.
Pin this article to read later! And make sure to follow us on Pinterest.
By Amber Topping on November 16th, 2015