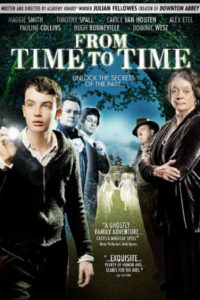 From Time to Time is a Julian Fellowes’ film. It’s also a children’s fantasy drama from 2009, starring Alex Etel, Maggie Smith, Hugh Bonneville, Dominic West, Douglas Booth, Timothy Spall and Pauline Collins, among others. Based upon a children’s book by Lucy M. Boston, The Chimneys of Green Knowe (1958) – which I have not read, so I cannot comment on the accuracy of the film adaptation – From Time to Time is the story of a boy who is shipped off to his estranged grandmother’s manor house, a house called Green Knowe, an old, old house with many ghosts and many family secrets.

13-year-old Tolly Oldknow (Alex Etel) arrives in the winter of 1944 at Green Knowe, the ancestral home of the Oldknows, to live for a time with his grandmother, Mrs. Oldknow (Maggie Smith). His father, David, is missing in action. And his mother has sent him to his paternal grandmother’s, while she searches for answers to David’s fate in London.

Tolly does not know his grandmother, nor she him. A rift generated by David’s marriage to a woman considered below his status by his proud mother, Mrs. Oldknow, has fostered resentment on all sides. And yet, here, in the winter of 1944, David’s son has returned to Green Knowe, to the Oldknow family, and perhaps it is time for some mending.

Mrs. Oldknow begins to tell Tolly stories, family stories, weaving a familial tapestry around this boy, who is feeling so very adrift and lost and unsure. And as the stories unfold, the characters in them begin to come to life. Previous occupants of Green Knowe appear as ghosts, or is it Tolly, who is the shade? The house – quite willy-nilly and with no rhyme or reason – begins shifting between present-day 1944 and the early 19th century, during the height of the Napoleonic Wars, when Captain Thomas Oldknow (Hugh Bonneville) is master of the house. One minute Tolly is exploring the house, opening a doorway, and the next he is a ghost in the 19th century, sensed initially only by his blind ancestor, Susan (Eliza Bennett), daughter of the captain.

There is high drama in this earlier setting. The captain has married a vain and beautiful woman (Carice van Houten), who cares more about her social-climbing aspirations and her jewels than her children. Their eldest son, Sefton (Douglas Booth), is equally beautiful and vain and cruel. It’s a cruelty nurtured by an avaricious manservant (Dominic West), who gets a little bit too commanding during the master’s frequent war-induced absences. And then there is the blind Susan. She’s the apple of her father’s eye and the shame of her mother, whose special aide, a former slave Jacob (Kwayedza Kureya), who was rescued by the captain, causes much consternation amongst the haughtier members of the family.

Sound deliciously familiar? Yes, yes, there are certainly thematic links to Fellowes’ Downton Abbey. I won’t go into all the plot points, but there is an unexplained fire in the 19th century and never-found stolen jewels – a mystery that perhaps a 20th-century boy can get to the bottom of, and, in doing so, save a cash-strapped Green Knowe of 1944. Perhaps. And perhaps there is more between heaven and earth, than our current philosophies allow, to misquote Shakespeare, and missing fathers, yeah, perhaps they are with us always.

Well Worth a Watch

From Time to Time is a rather lovely film, a beautifully filmed, well-acted, engaging story. It suffers from some editorial choppiness at times, but that’s easily forgiven. The story has a poignancy to it that is very heartwarming and emotionally fulfilling. A few tears will fall, at least they did for me. Dame Maggie Smith is such a powerful screen presence – is she ever not?! It is well worth a watch.

Content Note: Rated PG for mild thematic elements and some moments of children in peril.

Our romance-themed entertainment site is on a mission to help you find the best period dramas, romance movies, TV shows, and books. Other topics include Jane Austen, Classic Hollywood, TV Couples, Fairy Tales, Romantic Living, Romanticism, and more. We’re damsels not in distress fighting for the all-new optimistic Romantic Revolution. Join us and subscribe. For more information, see our About, Old-Fashioned Romance 101, Modern Romanticism 101, and Romantic Living 101.
Pin this article to read later! And make sure to follow us on Pinterest.
By Jessica Jørgensen on August 4th, 2017