Whenever a fabulous paranormal romance series premieres, I get excited. Like super excited. With mediocre paranormal romances hitting our screens as of late (Roswell, New Mexico I am sadly thinking of you), I was thrilled to finally get my hands on the adaptation of the popular book series, A Discovery of Witches. I was already a fan, but would the writers get it right?

Thankfully, I can say they did. With a background in period dramas and fantasy, Kate Brooke (Mr. Selfridge; The Forsyte Saga) and Sarah Dollard (Merlin; Primeval) perfectly understand the necessary quality of a good old-fashioned romance and the seduction of immortal (period drama like) vampires. Diana Bishop and Matthew Clairmont were in good hands.

And to top it off, we got our dream cast in Teresa Palmer and Matthew Goode. Overall, I can say without hesitation, that the romance is so swoony, so intensely magnetic, that you will fall in love with these characters. In fact, you will fall in love with love. It’s just that good and that’s why it had to be the romantic moment of the month (I wanted to give everyone time to binge this fabulous new show).

Diana and Matthew – The Lead In 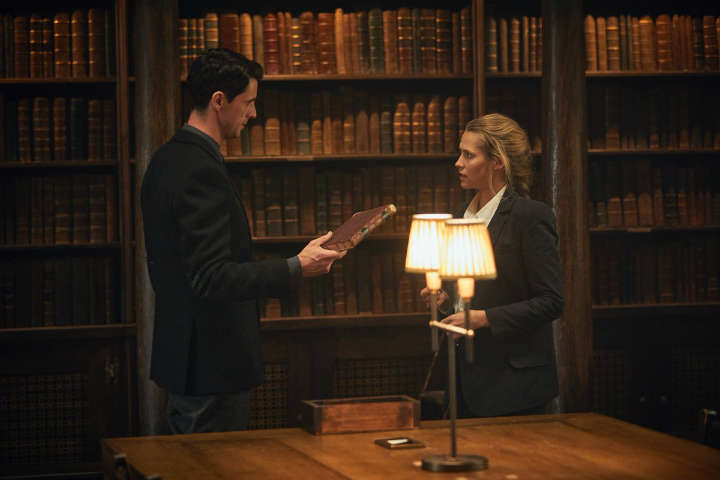 Without summarizing the entire first season, I will briefly give a rundown to the uninitiated. A Discovery of Witches, based on the bestseller by Deborah Harkness, follows Diana Bishop, a historian and academic doing research on alchemy. She also just so happens to be a witch who has no control over her powers.

One day, while doing research in the Bodleian Library, she takes out a mysterious book called Ashmole 782. There’s something different and special about it. In fact, the book has been missing for hundreds of years. So how come only Diana can conjure the book? Of course, the secret world of vampires, witches, and daemons (especially the secret organization called the Congregation) take an interest in her. They want the book. Moreover, they need the book because it contains vital information on their supernatural existence.

One vampire takes a particular interest in Diana and in the book: Matthew Clairmont. He’s intelligent and charismatic. He also just so happens to feel both an intense desire to protect Diana from those seeking her harm, but he himself desires her blood. The two develop feelings as the threats grow closer to home.

RELATED: A Discovery of Witches: Why This is the Future of Book Adaptations

Their feelings and Matthew’s urge to protect Diana intensify even though the Congregation forbids romance between vampires and witches. Only Matthew knows this, keeping the knowledge of their impossible romance to himself. He knows the dangers and attempts to distance himself. When he hides Diana at his mother’s castle, he must make an impossible decision. Will he choose love even when everyone believes they should stay apart?

When Diana learns about the covenant, she doesn’t care. She loves Matthew. However, he returns to Oxford to ponder this impossible dilemma, leaving her to his mother, Ysabeau at Sept-Tours. Ysabeau will do anything to convince Diana not to break the covenant for Matthew but Diana will not be deterred. Not even when her Aunts attempt to convince her of the importance of the covenant. Their lives would be in even greater danger.

Meanwhile, in Oxford, Matthew admits to his friend Hamish he’s in love with Diana. And as he discovers something intriguing about Diana’s blood (I’ll leave those spoilers for those who haven’t seen the series yet), he decides he must return to Sept-Tours to Diana, the woman he loves.

Matthew rushes back to Sept-Tours with determination. He’s made his decision to defy the Congregation. This choice makes their reunion and the moment all the more powerful because we feel the urgency behind his feelings. The passion. It’s a moment to sweep Diana (and the audience too) off her feet. Matthew and Diana just have that “it” factor. The kind of romance you look forward to.

Diana runs out to greet Matthew as he comes up the entrance to Sept-Tours. 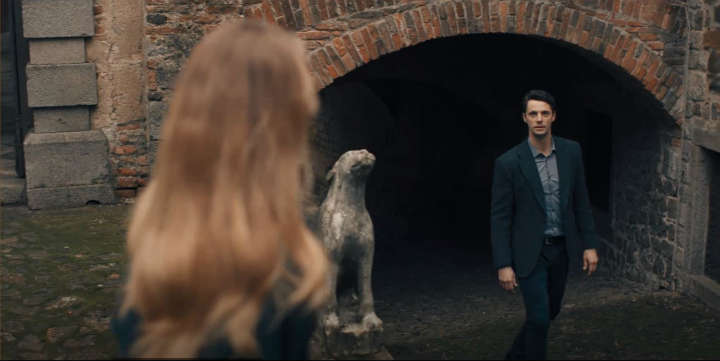 “Tell me,” she says adamantly. Like her, we want Matthew to say the words. “If I do,” Matthew replies, “There’s no turning back. You have to understand what that means.”

“Ysabeau made me understand.” Again, she says once more: “Tell me.” Mathew steps closer to Diana and lifts his hands to hers in a symbolic gesture of their union. 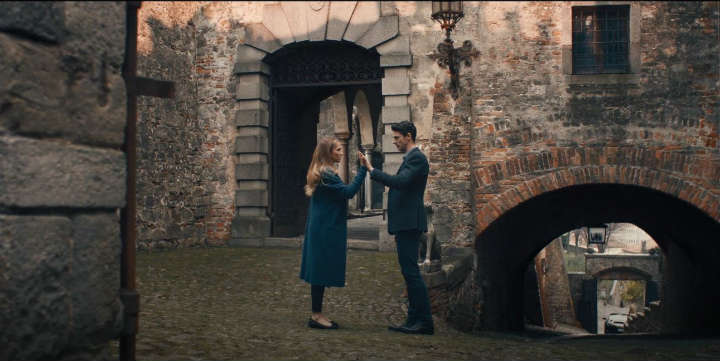 “From this moment, we will always be one,” Matthew says to seal their relationship into an almost symbolic supernatural marriage. Diana stares back joyfully still waiting for the words she longs to hear.

Then their hands clasp to symbolize their union, a choice that defines their love as well as emphasizes their complete disregard for the Congregation’s covenant. 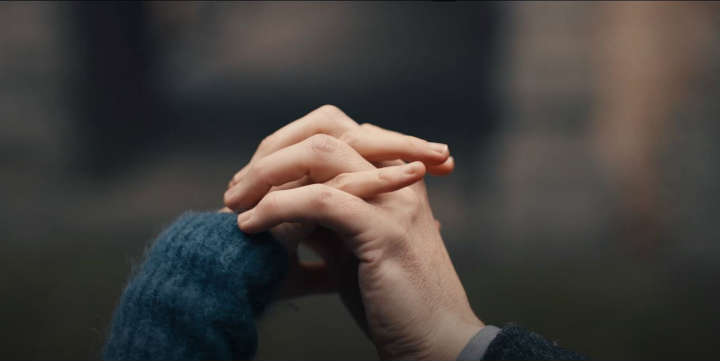 “Diana,” Matthew declares. “I love you.” Then he grabs her for an epic and especially swoony and romantic kiss.

What happens next, I will leave to your imagination. Overall, the love between Diana and Matthew is a love story you don’t want to miss.

Best Moment of the Month for January

What do you think about A Discovery of Witches? Do you love Diana and Matthew as much as I do? Are you eagerly waiting for the next season? Sound off below…

Our romance-themed entertainment site is on a mission to help you find the best period dramas, romance movies, TV shows, and books. Other topics include Jane Austen, Classic Hollywood, TV Couples, Fairy Tales, Romantic Living, Romanticism, and more. We’re damsels not in distress fighting for the all-new optimistic Romantic Revolution. Join us and subscribe. For more information, see our About, Old-Fashioned Romance 101, Modern Romanticism 101, and Romantic Living 101.
ATTENTION ROMANCE LOVERS! Have a romantic tip for our Romantic Moment of the Month column? Send us a message. We can't watch or read everything out there and would love to know of other current romantic moments we might be missing! We'll then take the moment into consideration. Contact us HERE.
By Autumn Topping on February 10th, 2019

5 thoughts on “Romantic Moment of the Month: Matthew and Diana in ‘A Discovery of Witches’”