If you have an intimate knowledge of Dickens then you know the one thing his stories are chocked full of is colorful characters. The only way I know his stories are through the magnificence of small screen adaptations, many of which were produced by BBC or ITV Masterpiece Theatre. Either way, not only do the productions bearing his name boast a litany of characters, they also have unique names.

But what if Inspector Bucket (Bleak House) were called upon to investigate money-lender Jacob Marley’s (A Christmas Carol) death? Or what if the once young and vibrant Miss Barbary who we came to know as Lady Dedlock (Bleak House) was bosom friends with an engaging and happy Amelia Havisham (Great Expectations)? Dickensian answers some of these questions. 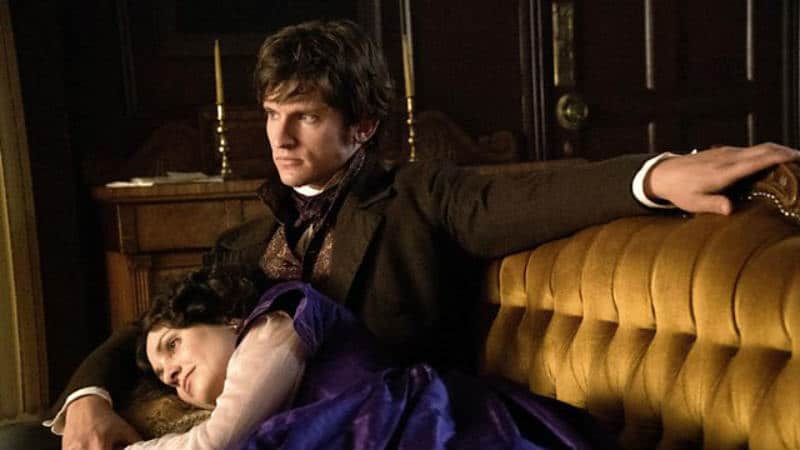 Being a Dickens-esque tale (some of the episodes were penned by Sarah Phelps, recently known for And Then There Were None), the number of characters is difficult to keep a running tally of. Knowing where to start is making me confused just thinking about it, so we’ll start with the first character we properly meet on-screen. Tuppence Middleton plays the wealthy Amelia Havisham. Having just lost her father, Amelia and her younger entitled brother, Arthur (Joseph Quinn) prepare to hear the reading of the will; a will which leaves the estate and her father’s company to Amelia. Enraged and feeling slighted by his sister no less, Arthur concocts a plan. He recruits the help of the cocky, devious yet charming Meriwether Compeyson (Tom Weston-Jones) to retain his rightful place as the Havisham heir, little realizing what this plan may cost him.

Elsewhere, there is Honoria Barbary (Sophie Rundle). Happy in her life as the younger daughter of Mr. Barbary (Adrian Rawlins), Honoria enjoys her secret courtship with the dashing Captain James Hawdon (Ben Starr). Though he has little prospects, James adores Honoria and is willing to do anything she asks. Blinded by their love, neither realize that with a devious shove by Honoria’s sister Frances (Alexandra Moen), coupled with the cruel hand of fate, they may have to choose between duty and honor. Then there is the Cratchit family. Bob (Robert Wilfort) works hard day in and day out to provide for his large family. Unfortunately, that soon becomes the least of his worries when his employer, Jacob Marley is murdered.

This ushers in the arrival of Inspector Bucket (Stephan Rea). A man ahead of his time as the first “detective,” he’s not about to let a murder slip through his fingers.

Putting words to paper to discuss everything pertinent about this miniseries is no easy task. On the one hand, I could make the argument it’s a magnificent piece of television. Yet as everything is prone to have, there are holes. One might even say Dickensian’s ambition reaches too high. The litany of characters causes more confusion than easy storytelling, especially in the first episode or two. While this is easily forgiven (because once again, this wouldn’t be proper Dickens without the parade of people). I think the one real flaw is the miniseries’ sense of place. Though there are several sets and locations we jump back and forth to, somehow the town and places are too “small” for the number of characters. Something about the setting felt too confining given how many people walk in and out of this script.

That complaint out of the way, I have nothing but praises for this miniseries. It’s an epic masterpiece. It’s interesting to organize the characters in our minds. While each of them have an important role in the Dickens story they’re a part of, this is an ensemble piece. Still, it’s lovely to see them in a different phase of their lives. To help alleviate the confusion and perhaps bring some order to the many characters you’ll meet on these London streets, here’s a quick rundown of the stories some of the additional main characters feature in.

It’s interesting to meet all of these people as they pass in and out of one another’s lives, and most of all to see them in such different yet familiar circumstances. Because they’re in a new dimension, we fervently root for happier endings for their lives since many of these characters aren’t ones Dickens gifted a happy ever after. As the series wraps (the UK edition is comprised of 18 30-minute episodes and is bookended by two 60-minutes episodes), the familiar slowly rises up to overtake the characters, pushing them towards the tragic figures we know.

Playing these characters is a top-notch group of talent, particularly from the main players as portrayed by Sophie Rundle (The Bletchley Circle), Stephen Rea (War and Peace), Tuppence Middleton (War and Peace, The Lady Vanishes) and Tom Weston-Jones, who I am the least familiar with. There’s not a single character we don’t have some emotional reaction towards at some point whether that be a shared joy or heartbreak or a desire to slap them silly, they make us “feel” a great deal. If you like Gothic period drama or anything Dickens related, Dickensian is sure to be your next period drama obsession.

Dickensian is currently only available on region 2 DVD set. Right now there is no set timeframe for a release in the US.

Have you seen Dickensian? Did you like it? Which story was your favorite? Sound off below with your thoughts!

Our romance-themed entertainment site is on a mission to help you find the best period dramas, romance movies, TV shows, and books. Other topics include Jane Austen, Classic Hollywood, TV Couples, Fairy Tales, Romantic Living, Romanticism, and more. We’re damsels not in distress fighting for the all-new optimistic Romantic Revolution. Join us and subscribe. For more information, see our About, Old-Fashioned Romance 101, Modern Romanticism 101, and Romantic Living 101.
Pin this article to read later! And make sure to follow us on Pinterest.
By Rissi JC on March 25th, 2016