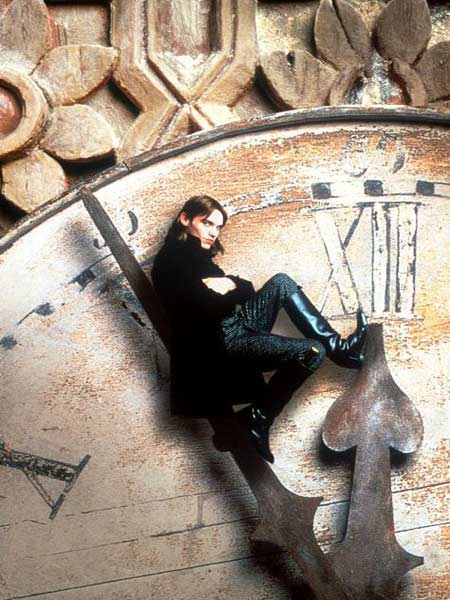 In the year 2000, the BBC decided to produce a big-budget fantasy mini-series based on Mervyn Peake’s classic 20th-century novels, Titus Groan and Gormenghast. The result was a lavish, styish production with an all-star cast, including Jonathan Rhys Meyers (The Tudors, Dracula), Stephen Fry (The Hobbit etc.), Neve McIntosh (Madame Vastra in Dr Who) and the late Christopher Lee (Lord of the Rings, Star Wars etc.). It can now be enjoyed on DVD and download. The DVD has a wonderful 30-minute “making of” film, featuring interviews with the cast and crew, several of whom have now sadly passed away.

It tells the story of the crumbling castle of Gormenghast, a Forbidden City-like structure cut off from the outside world, ruled for centuries by the ancient and eccentric House of Groan. The story begins when old Lord Groan and his misanthropic wife Gertrude finally produce a son and heir, Titus. However, as Titus grows, it becomes clear that he hates Gormenghast with its meanlingless ritual and restrictive ways. All he wants to do is escape into the wild.

At the same time that Titus is born, a young man named Steerpike escapes from the kitchens and begins a Machiavellian career of advancement, which leads him from doctor’s assistant to apprentice Master of Ritual to Secretary of Gormenghast. In his quest for power, he will stop at nothing: murder, seduction and abuse of his various roles are all fair game.  Steerpike becomes Titus’ enemy, with one young man hungry for the power the other does not want, and the other determined to bring down the evil within Gormenghast and the whole structure with it.

Jonathan Rhys Meyers shines in this drama. It was his first really major role, and basically he is Steerpike. He gives a performance of the kind we have come to expect from him: hugely energetic but also seductively intense. Steerpike as a character is fascinating in that he is neither hero nor villain, but something in between the two. His murderous and manipulative career is truly evil, and yet we can’t help but sympathise with an unloved and abused boy from the kitchens who just wants a bit of what everyone else has got.

Most fascinating of all is his relationship with Lady Fuchsia, Titus’ overlooked older sister, who lives life as a perpetual teenager, caught up in her own fairytale world. The scenes between Steerpike (Jonathan Rhys Meyers) and Fuchsia (Neve McIntosh) become more and more emotionally charged as the series goes on, until they fairly crackle with unresolved sexual tension. And yet we never know what is truly going on in the characters’ minds.

Fuschia both idolises and despises Steerpike. She is clearly in love with him and desperate for love in return. And yet she also longs for the respect due to her rank (denied her because she is female) and would have Steerpike a servant rather than an equal. As for Steerpike, does he truly love Lady Fuchsia? Or is he just using her as he does everyone else? We never find out, and their oh-so-nearly relationship ends in tragedy.

Gormenghast also provided the first great role of Sir Christopher Lee’s old age. By the time this series came out, we were only one year away from seeing him as Saruman in The Fellowship of the Ring. In Gormenghast, he plays Mr Flay, an ancient, loyal servant to Lord Groan, whose respect for “the stones of Gormenghast” is all-consuming. Yet he is exiled from the castle for throwing a cat at Steerpike. (You have to watch it!)  He becomes a guardian figure, biding his time and watching over young Titus. Other now-departed actors in the drama include Ian Richardson, Spike Milligan, Richard Griffiths and Eric Sykes.

Gormenghast is a difficult drama to categorise. Not quite Gothic, not quite fantasy, it is something of a dark, grown-up Alice in Wonderland, where all the characters except Titus are exaggerated caricatures, living in a world that operates according to its own bizarre rules. Yet it is also a drama that tells the story of the 20th century: its revolutions and dictatorships, the human suffering and the severing of the past. It is by turns comic, tragic, gothic and romantic. It is also a visual feast, with sumptuously designed costumes and sets which look beautiful on screen. Why not acquaint – or re-acquaint – yourself with it today?

Our romance-themed entertainment site is on a mission to help you find the best period dramas, romance movies, TV shows, and books. Other topics include Jane Austen, Classic Hollywood, TV Couples, Fairy Tales, Romantic Living, Romanticism, and more. We’re damsels not in distress fighting for the all-new optimistic Romantic Revolution. Join us and subscribe. For more information, see our About, Old-Fashioned Romance 101, Modern Romanticism 101, and Romantic Living 101.
Pin this article to read later! And make sure to follow us on Pinterest.
By Elizabeth Hopkinson on July 29th, 2015