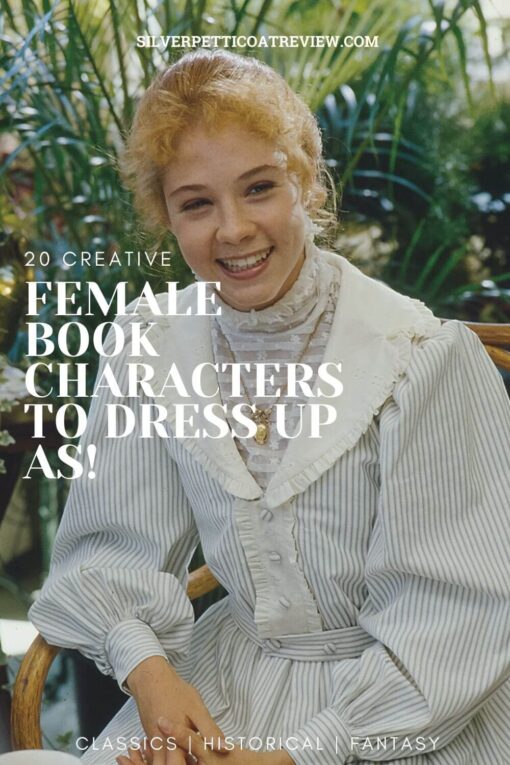 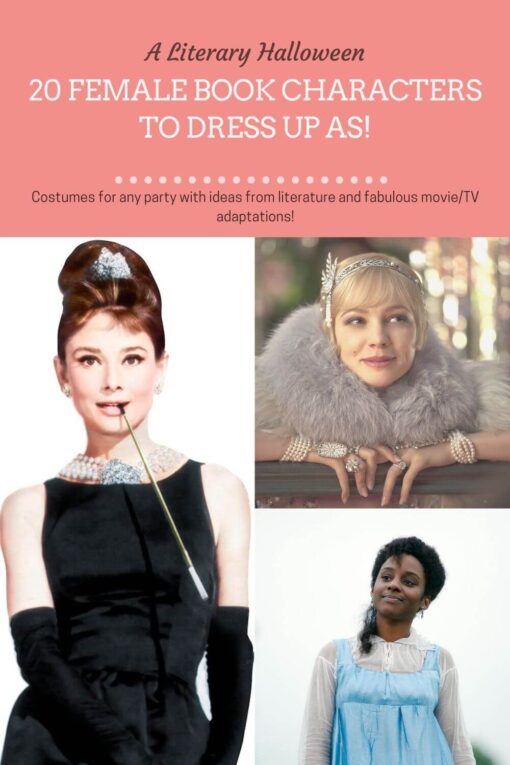 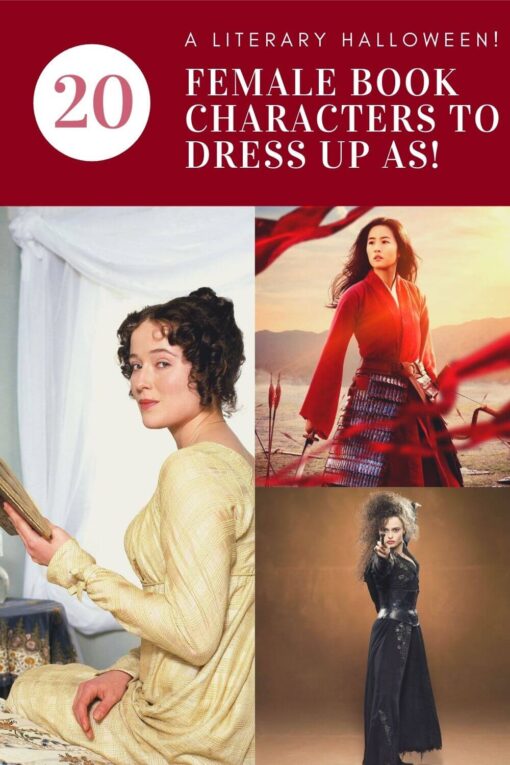 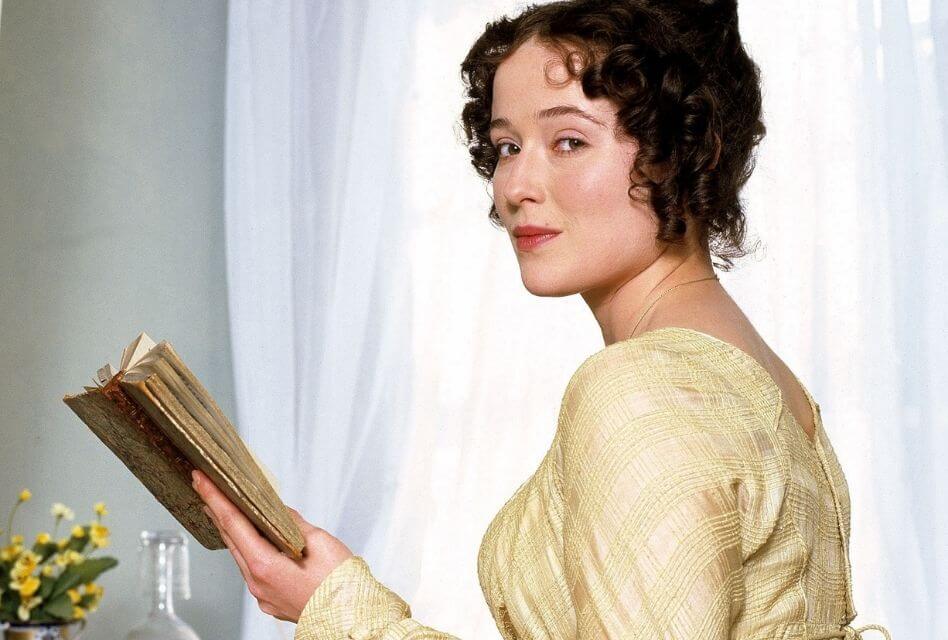 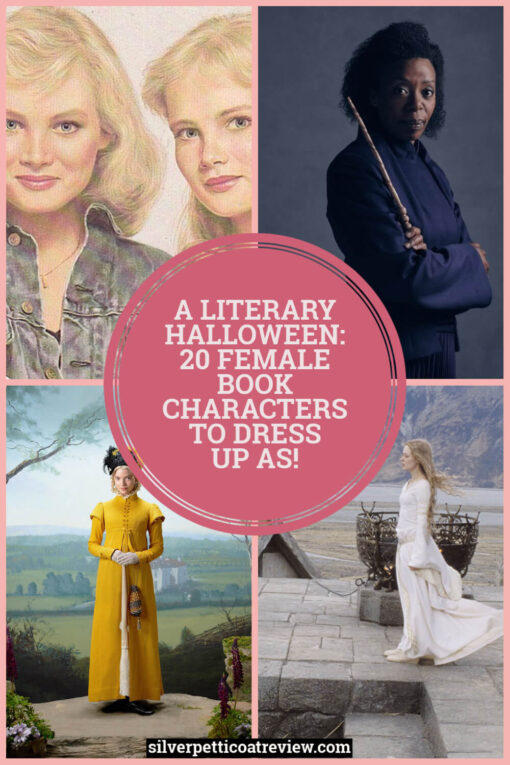 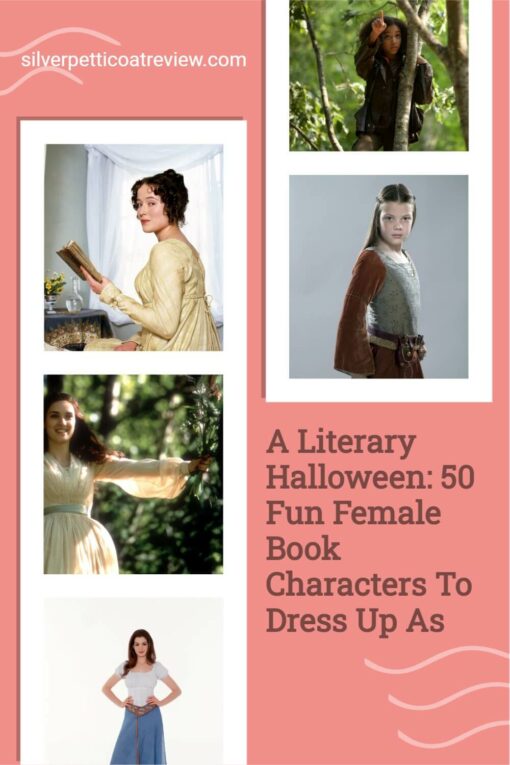 Monsters, pirates or maids, witches, or a favorite fairy tale character are often the costumes of choice at this time of year, but what about us book fans? Can we think of something a little more imaginative?

With Halloween weeks away, I wanted to do a fun post about some literary female character costume ideas and the female literary characters I think would be good fun to dress up as for Halloween.

(If I ever had the time to do anything other than don a witch hat and a wand and was actually good with a sewing needle. But, hey, there’s always Etsy!)

When I was growing up, my costume choices were much more inventive, and I tended to favor characters from the movies. Even then, my costumes were of characters initially found in literature.

Looking back, my favorite book character costume was Scarlett from Gone with the Wind. My grandmother kindly made it for me when I was eleven.

But being an adult shouldn’t stop us from dressing up in equally creative costumes. Here are just 30 ideas from literature (sometimes adapted on the big and small screen) that would make some great adult costumes of beloved book characters!

As a bonus, in the end, I’ve also included an extra 20 ideas for Halloween costumes for girls from popular children’s books.

So, be creative, use your imagination (the character doesn’t have to look like the movies either), and let me know what favorite book characters you would love to dress up as for Halloween!

(Note: This article was first published in 2013 and updated for September 2022.)

A LITERARY HALLOWEEN: FEMALE BOOK CHARACTERS TO DRESS UP AS

Who doesn’t want to dress up as a gorgeous, cold villain from time to time? It’s the perfect costume.

Young or old, you can try Anne’s different looks depending on her age. And, with several adaptations, there are so many costumes to choose from! It’s a classic costume and a fun choice.

While not as familiar as Anne Shirley, dressing up as another fabulous L.M. Montgomery heroine would be fun. It would be a cute costume, for sure.

The elves have such beautiful, elegant looks that this would be an excellent choice for Halloween, especially if you’re going to a Halloween party.

My sister and I should have done this when we were teenagers! But seriously, there should be some identical twins out there who could try this fun literary female character costume idea.

It’s an easy costume for twins, sisters, or best friends, especially if you’re interested in dressing up as blonde book characters.

Austen heroines are some of the best female book characters out there. So, why not go as one for Halloween?

Make sure not to dress too extravagantly! See the best Jane Eyre adaptations for inspiration.

This 17th-century literary female costume would be a real standout! Plus, the “A” would be an excellent clue to readers of classic literature.

I would love to revisit this as an adult again! Because of her extravagant style, Scarlett O’Hara remains one of the best literary character costume ideas.

Choose Hermione from the movies or the play. Or, better yet, dress up as the villainous Bellatrix, the lovable Luna Lovegood, or the fan-favorite Professor McGonagall.

Harry Potter has been done a lot, but it never gets old. This female literary character costume idea also works out great because of all the premade clothes you can buy online.

Harry Potter works if you need to put together some last-minute Halloween costumes.

I think the cat is an accessory necessity! I would also definitely go with the classic Audrey Hepburn black dress look.

You can buy an old white dress at a vintage shop and have fun damaging it! Great Expectations truly is a good book with memorable characters like Miss Havisham.

If you’re looking for a stylish 1920s character, look no further than the fabulous and gorgeous Miss Fisher. Of course, the costumes from the TV Series are exceptional!

Overall, there are so many inspirational looks to choose from! It is such a fun costume if the idea of 1920s glamour excites you.

#21: The Lady of Shalott from the Alfred Tennyson poem

For inspiration, look at the gorgeous painting of the same name by John William Waterhouse. The Pre-Raphaelite picture is lovely and provides a good idea for the costume.

#22: A Handmaid from The Handmaid’s Tale by Margaret Atwood

It’s such a dramatic-looking costume and easy to put together. You can buy the outfit for cheap on Amazon. But all you need is a long red robe and a white bonnet.

#23: Buttercup from The Princess Bride by William Goldman

The movie adaptation has such gorgeous costumes it would be impossible not to be influenced by them. You could choose the white gown with the crown or the iconic red dress with the gold belt.

The latter is probably the easiest to replicate as numerous costume companies sell the outfit.

A Civil War-era dress (which you can buy) would work. You could also try replicating one of the outfits from some famous adaptations. I particularly like Jo’s white dress in the 1994 film.

If you want to be more authentic to the book, you can dress up in women’s work clothes from the mid- ’90s like a Jigsaw Pencil Skirt Suit.

Or you could look to the later movies for inspiration, from the red flannel pajamas to the ugly Christmas sweater to the bunny outfit or even some of her work outfits.

Just have fun with it! Don’t forget the diary accessory, though.

#26: Elphaba from Wicked by Gregory Maguire

If theater makeup is your jam, why not go as Elphaba? All you need is an Elphaba witch costume (they are buyable) and green makeup.

Honestly, any black witch outfit will do.

#27: Ella Enchanted from the book by Gail Carson Levine

This idea would easily work for kids or adults. But you can dress up in a medieval fantasy dress or get inspiration from the 2004 film – like in the photo above! This idea sets you apart from all the Disney princesses.

Miss Marple would be such a unique idea! She wears 1950s-style clothes: usually neutral in color made from wool and flannel, often like a suit with a blouse.

With the outfit, you could carry a purse, wear a grey-colored wig (if you don’t have grey hair), and even a hat.

If you want to go as an original classic book character, consider Margaret Hale. She’s intelligent, passionate, and kind and gets to wear beautiful Victorian outfits.

The 2004 adaptation offers good inspiration. Check out this terrific article from All Things Hair about different types of Victorian hairdos for hairstyles.

There are several female characters in Shakespeare’s works if literary plays are of interest. But Juliet in a gorgeous Renaissance dress is always a good choice.

While this list mainly focuses on female book character costumes for adults (or teens), we don’t want to leave out all the children in your life.

So, here are a few bonus ideas for all the little girls in your life. These choices come from picture books, children’s books, and teen books.

What famous female book characters do you wish you could dress up as for Halloween? Do you have a favorite character you’d love to pretend to be? Sound off below…

4 thoughts on “A Literary Halloween: 50 Fun Female Book Characters To Dress Up As”