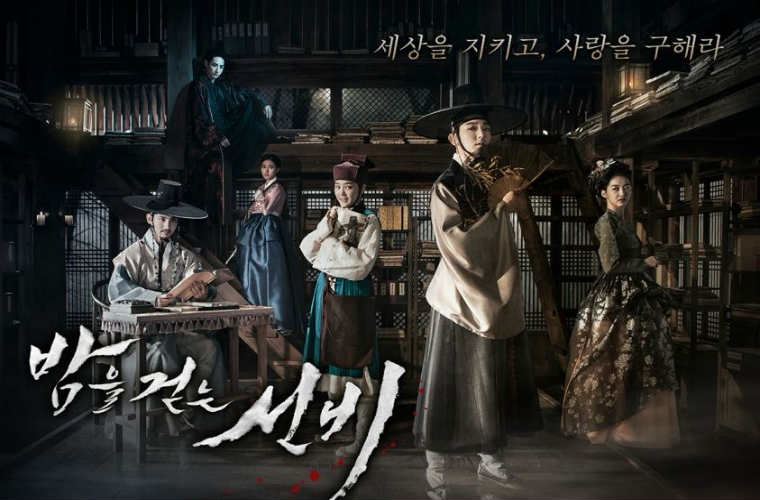 The Scholar Who Walks the Night Review

Set during the Joseon Dynasty (a more fantasy version obviously), The Scholar Who Walks the Night tells the story of a scholar who is friends with the Crown Prince. This same scholar, Kim Sung-Yeol (played by Scarlet Heart Ryeo’s 4th Prince) soon uncovers the truth of a vampire conspiracy in the kingdom. Meanwhile, the Crown Prince attempts to take down the evil Gwi, a vampire who controls the royal palace.

With the help of another powerful vampire, a plan forms. Unfortunately, this secret plan gets thwarted when Gwi discovers the truth of their scheming. Everything comes crumbling down with only one nugget of hope: Sung-Yeol gets turned into a vampire and is given the magical black cloak that allows him to go out in the sun. A monster against his will, things get worse for our hero when his love sacrifices herself for him.

Over a hundred years later, Sung-Yeol is still trying to take down Gwi by finding the book with the prince’s original secret plan. He has two followers that help him in this quest. In the meantime, a girl dressed as a boy (you find out why later on) masquerades as a bookseller. Jo Yang-Sun loves to tell stories and sell banned books. She’s an expert at finding the impossible, rare books as well. Of course, this leads Yang-Sun into the service of the scholar vampire in search of the Prince’s plan.

With determination and optimism, Yang-Sun agrees to take on the search. She agrees not knowing that this man is also a vampire and “The Night Scholar” she fantasizes about in true blue Northanger Abbey fashion. Soon, the scholar discovers the bookseller is not a boy but a young woman. For the first time in over a hundred years, he begins to give into his human feelings of love. At the same time, a doppelganger to his dead first love appears mysteriously.

And like any good K-drama, a secondary romance appears for our bookseller heroine in the Crown Prince. Yes, the triangle really is between a vampire and a prince. There are other secondary and amazing love stories filled with unrequited love and sacrifice. The main love story between the vampire scholar and cross-dressing bookseller, however, stands the strongest because it is a soul love full of swoon-worthy moments. This is easily one of the most romantic vampire shows of all time with amazing moments in almost every episode. I seriously loved the many epic moments between these two.

That being said, while I love the old-fashioned romance in The Scholar Who Walks the Night, I would be remiss to not mention the absolute brilliance of Lee Soo-Hyuk as the evil vampire Gwi. Never has an actor embodied a vampire more than him. Honestly, his layered performance as Gwi who longs to understand humanity from the sidelines is absolutely stunning to watch. Gwi also echoes back to the seductive but fully evil vampires of the past. The first vampire novel, The Vampyre based on Lord Byron comes to mind. Gwi truly makes for one of the best Byronic villains I’ve seen in a good long while. I feel like this actor should play a vampire again because the performance really is that good.

Overall, The Scholar Who Walks the Night isn’t perfect. In the first episode, for instance, I feel like the series suffers from some choppy edits. Still, this is a problem that fixes itself within a few episodes as the show really finds its stride. Some may also find the end confusing as well but I believe if you pay close attention to the themes, the open ending will make sense.

Indeed, one of the greatest aspects of The Scholar Who Walks the Night comes down to themes of imagination and hope. The importance of storytelling in the face of reality gives people a reason to look for the world to be better. It is a powerful message that resonated well with a good love story and characters to back it up. If you love period dramas with a touch of the supernatural or romantic vampire series, The Scholar Who Walks the Night is one you definitely want to check out when you find the time.

Content Note: The Scholar Who Walks the Night is TV-14 and has vampire violence and some torture scenes (not overly graphic though) that may be hard for some to watch.

What do you think about The Scholar Who Walks the Night? Sound off below…

Our romance-themed entertainment site is on a mission to help you find the best period dramas, romance movies, TV shows, and books. Other topics include Jane Austen, Classic Hollywood, TV Couples, Fairy Tales, Romantic Living, Romanticism, and more. We’re damsels not in distress fighting for the all-new optimistic Romantic Revolution. Join us and subscribe. For more information, see our About, Old-Fashioned Romance 101, Modern Romanticism 101, and Romantic Living 101.
Pin this article to read later! And make sure to follow us on Pinterest.
By Autumn Topping on November 7th, 2016