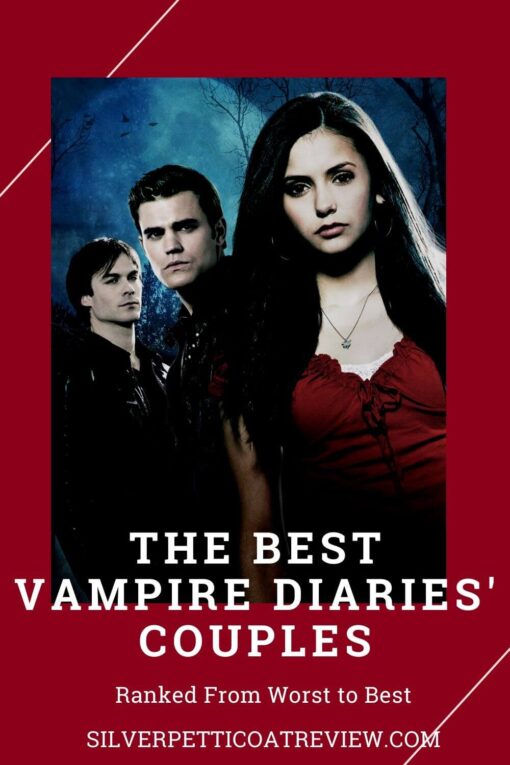 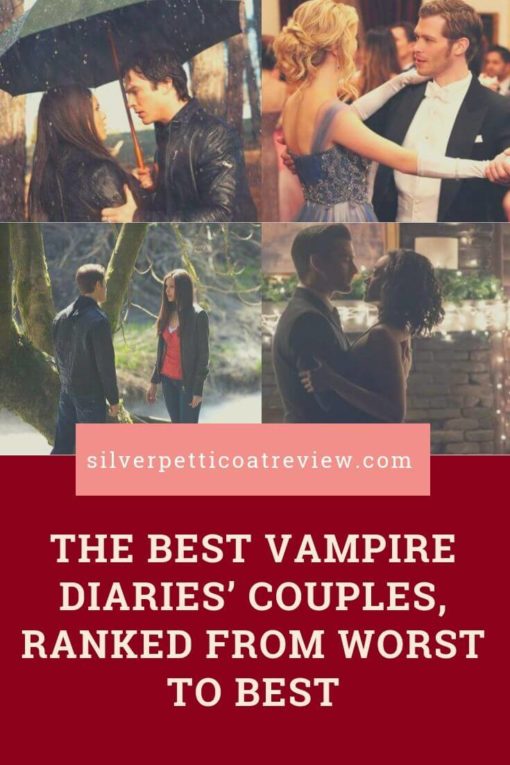 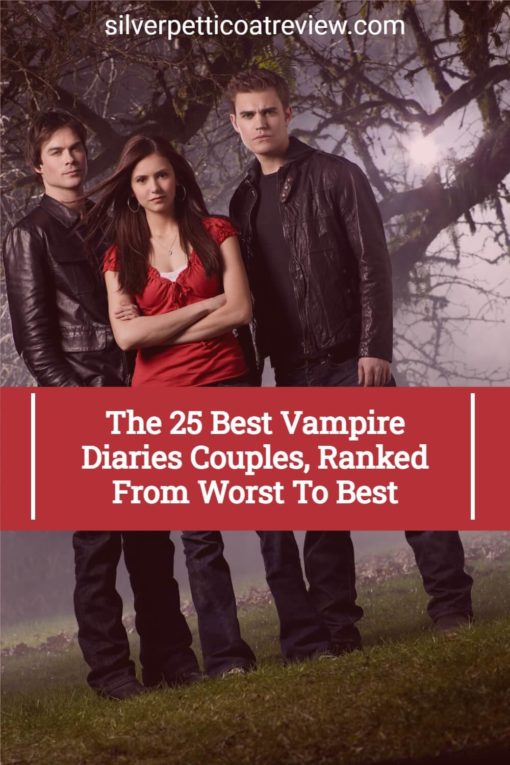 This month marks the 10th anniversary of The Vampire Diaries. Yes, ten years (now thirteen) have passed since we first met the beloved supernatural characters of Mystic Falls. While the series had its ups and downs throughout its impressive eight-season run, it was always must-watch television. In celebration, I thought it would be fun to revisit the most important part of the paranormal romance show: The Vampire Diaries couples.

Part of the enjoyment of watching week to week was “shipping” different characters together. However, the love triangle between Damon, Elena, and Stefan hooked fans from the start. Still, other romantic TVD ships became integral to the show as well – some TVD couples more successful than others.

So, let’s discuss the best couples.

It’s hard to root for this romantic relationship because Tyler was the epitome of the bad boyfriend. And in the #metoo era, they’re hard to swallow as a couple, especially with the inappropriate scene in the pilot.

Still, both Tyler and Vicki are fabulous characters – just separately!

Ah, young love. Matt and Elena have an innocent-like teenage relationship. But as Elena points out, she just didn’t feel passionate about him.

RELATED: Vampire Academy Review of Season 1: The Peacock Series is Full of Promise

So, it’s no surprise she breaks up with Matt and then falls in love with the new mysterious high school student, Stefan. Matt and Elena had a cute relationship, but nothing that could ever progress past high school. Poor Matt!

Jeremy treated Vicki with much more respect in the first season than Tyler, but these two didn’t fit together. Still, Jeremy’s puppy-like love for Vicki was a little bit sweet.

While this duo led to the fun new spinoff, Legacies, Alaric (previously a vampire hunter), and Caroline were never a believable couple. But it’s fun they got their own show out of it – even if Caroline appeared almost entirely offscreen!

This pairing lasted for much longer than it should have. While Bonnie and Jeremy were cute together initially, there was never any real tension, chemistry, or authenticity.

So while they were a good couple, they weren’t the best either.

Tyler and Liv had a definite onscreen spark. However, as a couple, they’re not the most memorable.

Maybe it’s my love for everything Dickens, but I’m a sucker for unrequited love stories – even if they never lead to a happy ending. And something is interesting and profound about Rose.

So, while these two only briefly hook up, Rose quickly becomes one of the only people Damon’s ever cared about in the TV series.

Vampires Nora and Mary Louise struggled with narcissism and psychotic behavior, traits leading to trouble in their relationship! Still, their bond was unbreakable.

In the books, Meredith and Alaric are a devoted couple. In the series, these two are only briefly together.

But it was a nice nod to L.J. Smith’s original books, and the two actors had chemistry. It’s too bad the potential pairing never went anywhere.

Valerie is Stefan’s first love, the two separated by misfortune. And while they didn’t work out, Valerie was an intriguing character.

Although Katherine and Damon didn’t bring out the best in each other and had a tumultuous relationship, the two scored high on the entertainment scale with great scenes together as a pair of naughty vampiric schemers.

They made a strong TV couple at first. But once Caroline became a vampire, Matt could never accept her for who she was. That would be the end of any serious relationship.

This likable duo could have been great if not for Jenna’s unfortunate and untimely passing. They were the cutest couple while they lasted, though.

Their star-crossed romance was full of potential until jealousy, anger, and bad choices ended their relationship. Tyler and Caroline had a great romance that could have been the end game if the writers hadn’t decided to take them in a different direction.

These two were an adorable couple impossible not to like. It’s too bad Anna became a ghost, only to pass on to the other side.

It took me time to warm up to this pairing, but they eventually grew on me. Besides, best friends do make ideal romantic couples.

Unfortunately, tragic endings are par for the course for these two.

Matt was a fantastic choice for the fiery, explosive Rebekah. She wanted to be an ordinary teenage girl, and Matt liked her spontaneity. Still, Matt couldn’t handle being in a supernatural relationship.

While they were never more than best friends, you could argue Lexi was in love with him. Lexi was always there when Stefan needed her, not to mention the sizzling onscreen chemistry between the actors.

Oh, what could have been.

I’m a huge fan of dark Byronic Heroes, so I loved them at first. However, they both moved on to more epic loves—Klaus with Camille on The Originals and Caroline with Stefan.

Still, Caroline and Klaus remain among the most popular Vampire Diaries relationships.

Sadly, their story ended in tragedy. But the two were the perfect Vampire Diaries couple while they lasted. Their twins, Josie and Lizzie, became two of the main characters over on Legacies, keeping this epic love story alive.

Bad-girl Katherine made it tough for the Salvatore brothers. But it was Stefan who was her true love. While Katherine was too selfish to make a romance work, this couple was still fabulous.

On re-watching the series, it’s hard to deny the underlying and unspoken romantic love brewing beneath the surface between Bonnie and Damon – especially once they went to the prison world together.

Without the epic Stefan and Elena relationship, this series would have never worked. They had one of the most epic romances of the series and were a favorite couple amongst Vampire Diaries fans.

Every vampire with the last name St. John is automatic romantic vampire gold! The chemistry, the emotion, the romance, this is the love story Bonnie deserved.

Seductive and passionate, the soul connection between Damon and Elena is indisputable. They’re an example of how to do a Byronic vampire romance story right.

The actors had real chemistry, Elena helped Damon become a better man, and eventually, they could lead a normal life together after a necessary transformation.

Now, it’s your turn. What are your favorite Vampire Diaries couples? Sound off in the comments below!

22 thoughts on “The 25 Best Vampire Diaries Couples, Ranked From Worst to Best”