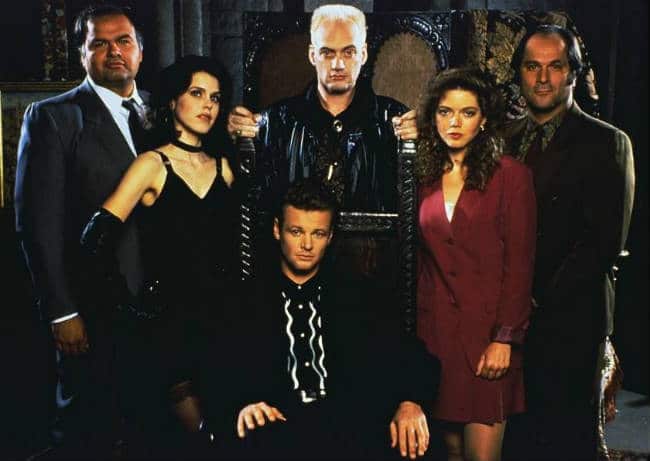 Forever Knight, a cult hit TV series from the ‘90s from writer and creator James D. Parriott, was one of the first of its kind. Nick Knight, a vampire in search of redemption works as a detective solving crimes in Toronto. Today, this has become quite the popular story. But in the early ‘90s, a “good” vampire was a little more unique.

Of course, Forever Knight wasn’t without its own influences. There’s the Interview with the Vampire like vibe between Nick, his maker Lacroix and Janette (the vampire woman he was in love with), often shown in flashbacks as they travel together across the globe and through time. And then there’s the Beauty and the Beast influenced relationship in modern day between Nick and the medical examiner Natalie who knows he is a vampire and helps him look for a cure to vampirism.

If you’ve been a fan of any vampire show that came out after Forever Knight, most likely it was influenced by this series.

If you’ve been a fan of any vampire show that came out after Forever Knight, most likely it was influenced by this series. For that alone, fans of the genre should check out this show.

That all said, Forever Knight is a fantastic series that stands on its own feet. While there are a few episodes that are a little bit too much “damsel” of the episode (in the form of a “strong” woman who Nick is drawn to and wants to help), the writing of the series is clever and witty with a very rich and deep mythology. What’s especially great about the series is the religious angle. Too many vampire series today are afraid to approach religion so as to be politically correct, but the vampire has always been a “religious” character with religious imagery, so the exclusion feels a little shallow. I find a vampire series is all the stronger for not ignoring it. Forever Knight never shies away from its religious history and fully embraces it in an intriguing way (whether you are religious or not).

One of the big questions of the series is about the mystery of the afterlife. What happens when you die? Fear of the unknown leads many of the characters to choose vampirism over death because they fear what will happen when they die. They hold onto life, clinging to the Earth as immortals rather than embracing the humanity they need to have love and actual happiness (which is what Nick seeks to have with Natalie). One of the more interesting episodes is the one about Nick when he crosses paths with Joan of Arc in the past. At the time, he can’t understand why she’s willing to die for her beliefs. Why won’t she let him turn her? But she has a belief in the afterlife, in redemption, hope, and God. This is a very important part of the series leading all the way to the finale.

Another question remains…With all of Nick’s many atrocities and murders, is he actually capable of receiving redemption? It’s a fair question that isn’t easily answered.

It’s this emotional depth found in Forever Knight that really sets it apart. Questions about vanity, faith, mortality, and redemption raise the stakes, which are other elements I’d like to see more of in vampire stories today that perhaps have at times become a little too shallow. 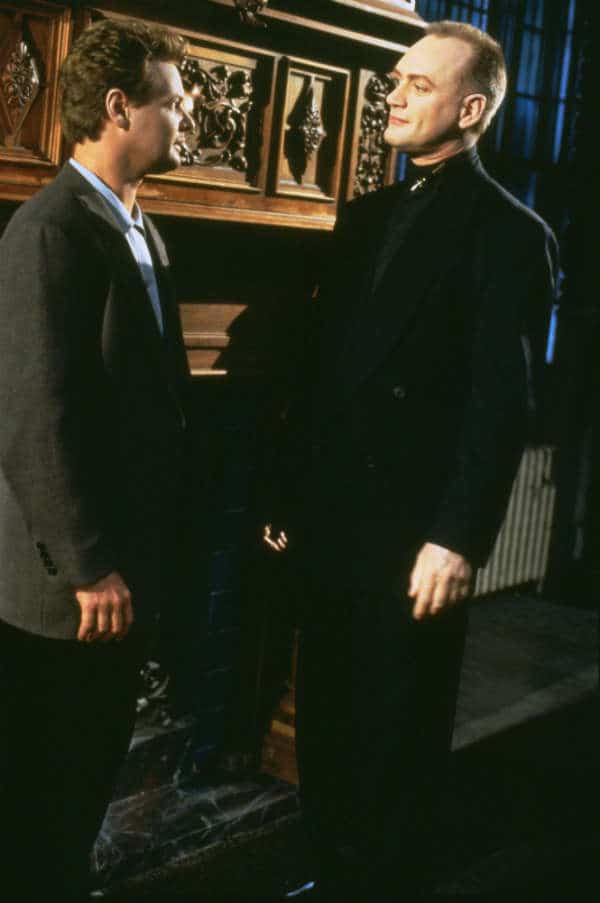 Besides the deep themes in the series, both the characters and the cast playing the parts are wonderful to watch. There’s Geraint Wyn Davies as Nick Knight, the lovable vampire longing to become human, Nigel Bennet as Lacroix, the entertaining “evil” vampire who makes Nick’s life a living hell (and even has his own late night radio talk show as the “Nightcrawler” with barely coded message for his “son” Nick), Deborah Duchene as Janette who was romantically involved with Nick for 97 years and runs the pre-Fangtasia Nightclub Raven, Catherine Disher as Natalie the medical examiner who helps Nick search for a cure and falls in love with him, John Kapelos as Don Schanke – Nick’s very human and politically incorrect partner (who brings a needed element of humor to the series), Lisa Ryder as Tracy Vetter – Nick’s second partner who falls in love with another vampire (the handsome Vachon) and of course three different captains for each series. My favorite? Captain Amanda Cohen from the second season who helped even out the playing field between male and female characters a little bit. Together, every character brings something necessary to the series. And for me, all were memorable.

The guest stars and characters should also be noted for often being quite impressive. If you’re a fan of the popular Canadian series Road to Avonlea, for instance, then you’ll love the guest stint from Cedric Smith (Alec King) as a vampire hunter. That was something I thought I’d never see (Alec King, Vampire Hunter). There are many other notable guest stars as well including Carrie Ann Moss. 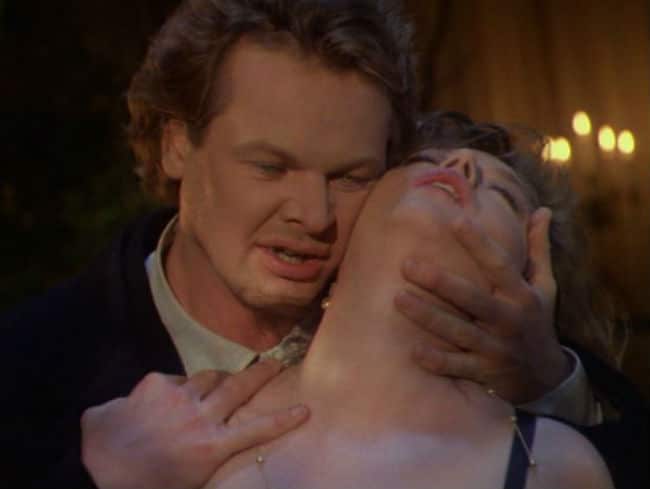 And then there’s the romance. Nick and Natalie start off as friends, but it’s obvious they have this unspoken attraction. And as the series continues, it becomes clear quite quickly they are in love with each other. It’s funny, but you don’t fully understand Natalie as a character until the final episode and why she loves and wants to be with this beast (who is actually much darker and psychotic than you might expect from a “good” vampire). I won’t give away why, but in that moment of characterization, everything about her just makes perfect sense.

Without going too deep, she’s portrayed as this Beauty character who works to tame a vampiric Beast so he can end his immortal curse. There are scenes that Nick is so much like the Beast, in fact, I figure it must have been a purposeful influence. He even speaks French quite often in the show which gives their relationship and the Beauty and the Beast influence even more authenticity. The chemistry between the two actors is filled with sparks and synergy and I found myself constantly hoping for another scene between them. Fans of relationships like Mick (a character I remember was purposely named similarly to Nick as tribute – but don’t quote me on it) and Beth from Moonlight should love this relationship.

Then there’s the atmosphere of the series. Nick and Lacroix, both Byronic Heroes, gives this urban fantasy series a feeling of romanticism. There’s an interest in music, art, literature, intense emotions and intuition. So fans of the Romantic period should definitely give the show a chance.

Nick and Lacroix, both Byronic Heroes, gives this urban fantasy series a feeling of romanticism. There’s an interest in music, art, literature, intense emotions and intuition.

Forever Knight is not without its faults, however. Each season has at least a couple of questionably silly episodes with season 3 (particularly the first half) at times hard to swallow. With the change of networks (CBS to USA Network), some changes were forcefully made and not for the better. A couple of fan favorites were killed off and replaced with younger, better-looking characters. This change is hard to take though I did learn to like the new characters… eventually. Not only that, there are some painfully bad episodes in season 3 such as “Black Wing” and “Games Vampires Play,” (about a virtual reality vampire game that was so awful I had to fast-forward some of it).

On top of a few weak episodes, season 3 adds a little bit of the objectification of women. More than a couple episodes started with scantily clad women who would become victims. Not to mention the cringe-worthy moment in season 3 when two women fight in underwear. Plus, at times the show does seem to focus a little bit too much on boys’ club rather than giving more screen time to the underused female characters. (To be fair though, I should point out how pleasantly surprised I was to discover there were quite a few female writers writing episodes for the series. Not to mention, the female characters in the series are complex and well written.)

Yet despite some of these flaws (particularly found in parts of season 3), when Forever Knight is good it’s really good. When the series focuses on Nick’s quest for redemption and humanity, the Nick and Natalie love story, and the relationships between Nick, Lacroix and Janette, Forever Knight becomes one of the best vampire series to ever be on the air.

This has easily become one of my favorite vampire series (and I’ve seen and loved many) ever written. It’s important to remember that Forever Knight came out in 1992 and is a reflection of the time. So to appreciate the series you really can’t watch it with a modern lens. The special effects are a little dated and the show did have a low budget. But the acting, writing, memorable characters and romances should make up for it in spades. Besides all that, you should watch the series simply just so you can see the two episodes about Divia, Lacroix’s sociopathic young daughter who turns him into a vampire during the Pompeii tragedy. Kathryn Long (only a young teen at the time) gives such an incredible performance it’s a shame she didn’t become a huge star.

In all, if you love a good vampire series, Forever Knight is not one to be missed. All three seasons are available to buy on DVD. Though be warned, season 3 is much more expensive and difficult to obtain – but it is possible and I think worth it.

Have you ever watched Forever Knight? What do you think of this vampire series? If you haven’t seen it before, do you think this is a show you will want to watch? Let me know in the comments!

Our romance-themed entertainment site is on a mission to help you find the best period dramas, romance movies, TV shows, and books. Other topics include Jane Austen, Classic Hollywood, TV Couples, Fairy Tales, Romantic Living, Romanticism, and more. We’re damsels not in distress fighting for the all-new optimistic Romantic Revolution. Join us and subscribe. For more information, see our About, Old-Fashioned Romance 101, Modern Romanticism 101, and Romantic Living 101.
Pin this article to read later! And make sure to follow us on Pinterest.
By Amber Topping on July 20th, 2015