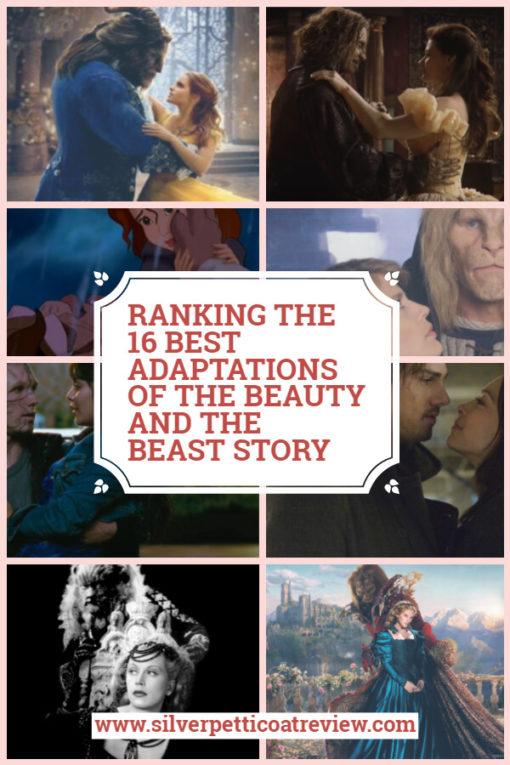 So, because we’re huge fans of the Beauty and the Beast tale, we thought it would be fun to rank the best and most popular movie and TV adaptations from worst to best (though none of these are awful – we took those ones off the list).

However, this isn’t a list of ALL adaptations. We didn’t include movies like Beauty and the Beast, only using the themes (IE: Edward Scissorhands, King Kong) as that would be a much longer list. The movies and series on this list are all adaptations of the fairy tale or are close retellings.

Beastly is a Beauty and the Beast movie for teens. It’s a cute, imperfect YA adaptation but a fun watch overall!

In this version, a spoiled and mean New York teen is cursed one day by a witch and made “ugly.” Only true love will break the curse.

I put ugly in quotations because Alex Pettyfer’s beast makeup is more cool-looking than unattractive.

Still, while the film could have had more depth in a Beauty and the Beast story, it’s a pleasant, entertaining film.

This 1987 musical adaptation is part of the 1980 film series Cannon Movie Tales and is a fan favorite. While it’s a little bit melodramatic, and the songs could be better, it’s a sweet adaptation the whole family can enjoy.

If you’re a fan of The Nanny, then you’ll likely enjoy this rom-com Beauty and the Beast spoof.

In this version of the tale, a New York cosmetologist is offered a job to teach the children of a “beastly” Eastern European dictator, and they soon fall in love.

With a touch of The King and I and The Sound of Music mixed in for good measure, it’s an overall enjoyable movie.

Now, this adaptation is not to everyone’s taste. But if you like Fran Drescher or Timothy Dalton, check it out!

This is an urban fantasy adaptation of the Beauty and the Beast story about a detective falling in love with a man turned “beast” from a government experiment.

While the show struggled with showrunner changes and a few ups and downs, you can’t deny the fantastic chemistry between Jay Ryan and Kristin Kreuk.

Rumple and Belle are one of the most popular romantic TV couples from the hit series, Once Upon a Time. Their version of the story pays homage to the Disney cartoon while also changing it up a bit.

This time, the beast is the fairy tale character, Rumplestiltskin, and he’s a “beast” obsessed with power.

While their love story plays out over seven seasons, the closest their romance gets to the original story is in the episode “Skin Deep,” in season one. Rumple and Belle’s story isn’t perfect, but their beautiful ending is!

Faerie Tale Theatre was a popular ’80s series from Shelley Duvall. In each episode, a different fairy tale was adapted for television.

In this episode of the show (season 3, episode 6), Susan Sarandon and Klaus Kinski starred as Beauty and the Beast in a version paying homage to the 1946 Cocteau classic film. You’ll recognize the look of the beast, some of the same scenes, and camera shots.

So, it’s a great adaptation though not unique. Anjelica Huston also stars as one of the merchant’s three daughters, aka Beauty’s sister!

This TV movie from the Hallmark Hall of Fame stars the Oscar-winning actor George C. Scott and his real-life wife, Trish Van Devere.

The production was nominated for three Emmys and is an excellent adaptation with heavy Romanticism and emotion. Though expect a different-looking beast than usual!

Emma Watson and Dan Stevens star in this version of the Beauty and the Beast story, but it’s the supporting characters that steal the film.

From the perfect Hattie Morahan as the Enchantress to Emma Thompson as Mrs. Potts to Kevin Kline as Beauty’s father to Luke Evans and Josh Gad as Gaston and LeFou, and more, this adaptation includes stellar talent.

The look of this Disney musical remake is also beautiful, and it’s a fun movie to watch.

However, the film wasn’t without its flaws. Excessive CGI used on the Beast’s face took away a little bit of emotion from Steven’s skillful performance, the two leads struggled to show chemistry, and Emma Watson’s singing voice wasn’t great.

A few tweaks could have also helped the overall script. One, Beauty should have been plain in this version due to the handsome prince’s obsession with “beauty,” and the curse should have been longer, as is typical.

In this version, not much time has passed before Beauty helps the Beast break the curse with her love.

Still, minor complaints aside, this is overall a fantastic Beauty and the Beast adaptation due to the high production quality, memorable music, and magnificent cast.

This is the Russian version of the Beauty and the Beast story about a young woman falling in love with a tree spirit. He also just so happens to be an enchanted prince.

These are the two existing adaptations though the first is considered an artistic animated masterpiece. The short animated film is full of vibrant colors and gorgeous art.

In this gender-switch version of the tale, a young woman is cursed with a pig nose. Not because of her own vanity but because of the selfish behavior of her ancestors. To break the curse, she must be loved just as she is by a blue blood.

Soon, she falls in love with a young man with a troubled past. And while he loves her just as she is, he’s not exactly who he says he is. So, Penelope must learn to love herself and break the curse on her own.

This underrated movie is full of swoon-worthy romantic moments (James McAvoy always shines as the romantic leading man), uplifting messages without being preachy, and a ton of soul. It’s one of my personal favorite films.

In a cool twist, Penelope is interested in horticulture. So, while there’s no rose garden, gardening and plants still play an important part in the story.

If possible, I recommend watching the original version of the film since the American release cut out a few important scenes. The US/UK cut is 1 hour and 29 minutes, while the German Blu-ray release is 1 hour and 44 minutes.

The 2012 series is a re-imagining of this show. There’s also an entertaining Turkish version now playing on Netflix called Subat. But the original series is the best!

This movie has perhaps the most gorgeous beast makeup out of all the adaptations. It also has the most beautiful costumes.

What’s also great about this French adaptation is that it borrowed more from the original Villeneuve classic book than most other versions do.

However, despite its beauty and fresh additions, the film did falter in a few ways, pushing it farther down the list.

If the movie had focused more on the Beauty and the Beast relationship and romance and not on some unnecessary flashbacks, it could have been the best.

Part Gothic Horror, the Czechoslovak fairy tale romance, depicts the beast as a deadly killer with a bird-like face. It’s a frightening film and includes violence, so it’s not a family or children’s film.

However, it is an exquisite adaptation with an incredible performance from Vlastimil Harapes as Netvor, the Beast.

Charlotte Bronte’s classic novel, Jane Eyre, is arguably (even likely) a retelling of the Beauty and the Beast fairy tale with the additional influence of “Bluebeard.” The novel even mentions Perrault’s fairy tales.

In both stories, a poor young woman with a beautiful heart falls in love with a “beast,” lives in a Gothic mansion/palace, and helps transform the man into a better person.

Not until Rochester “transforms” (transformation is necessary to all Beauty and the Beast stories) from a sinful man into a redemptive man worthy of Jane can they have their happily ever after.

Still, whether metaphorical or literal, the basic elements of the tale are present in both the original story and Jane Eyre. For more comparisons, read this article.

And while there are numerous Jane Eyre adaptations, I’ve included the three best – at least in my opinion! But feel free to check out the others as well. Many fantastic adaptations exist.

The Disney classic is a magical masterpiece, and it’s hard to find fault with this animated movie.

While it focuses on Beaumont’s shortened version of the fairy tale rather than the original classic book, Disney created a wonderful and memorable version of the Beauty and the Beast story.

And it’s worth revisiting time and time again.

We’ve reached the end of this list! Jean Cocteau’s 1946 classic, La Belle et La Bete (Beauty and the Beast), is in the top spot.

The film is artistic, beautiful, haunting, and magical, and set the standard for all future adaptations. Like the Disney version, this film also focused on adapting the Beaumont version of the story to great success.

I first watched this film in French class in college and fell in love with it! The visual effects are stunning and groundbreaking, the cinematography perfect, the makeup of the beast original, and the acting superb.

As far as Beauty and the Beast films go, this one is not to be missed!

What is your favorite version of the Beauty and the Beast story? Did I leave any of your favorites off the list? Let me know in the comments!

MORE BEAUTY AND THE BEAST: