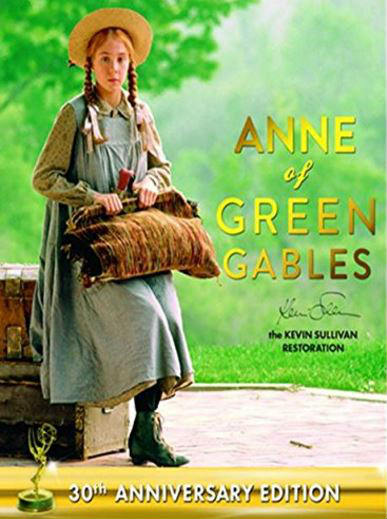 Never has the beauty of Prince Edward been so enchanting than when described in the stories told by L.M. Montgomery. From the imaginative Anne to the spirited Emily to the unforgettable story girl, Sara. And never have there been adaptations that quite captured Montgomery’s spirit more than that of the Anne of Green Gables and Road to Avonlea productions as interpreted by Kevin Sullivan. From the time the 1985 production aired, the magic of L.M. Montgomery’s world sprung into visual splendor and touched the hearts of kindred spirits everywhere.

Today, the Emmy-winning Anne of Green Gables is as popular as ever. It’s so popular, in fact, it’s hard to believe the film production just celebrated its 30th anniversary. New articles about the film continue to garner as much traffic as if it premiered in the last year. Such is the staying power of this incredible series.

In celebration of its 30th anniversary, Kevin Sullivan completely restored the Anne of Green Gables 1985 (so only part 1 thus far) film for its recent Blu-Ray release. I can tell you (much to my great joy) that the widescreen restoration is simply beautiful.

There were some criticisms over the restored DVD release. However, I think whatever qualms fans may have had with that edition, their fears should be quieted here. Prince Edward Island looks as bewitching as its ever looked (even though much of it was filmed elsewhere). The restoration is eye-catching, once again capturing the wondrous atmosphere that probably had most of us including a trip to PEI on our bucket list. Having recently watched the standard edition, the difference is incredible. Not only is this restoration great for fans but for film history as well. Now, Anne of Green Gables will be preserved in the full quality it deserves.

The restoration is eye-catching, once again capturing the wondrous atmosphere that probably had most of us including a trip to PEI on our bucket list.

Here’s to hoping Anne of Green Gables (aka Anne of Avonlea as it’s known in some areas) and Road to Avonlea aren’t far behind. Sullivan and his team did a fantastic job and the Blu-Ray is a worthy addition to anyone’s film collection for old and new fans alike.

Separate from the film itself, the Blu-Ray edition is not without some imperfections. Unfortunately, there are no scene selections which make navigation a little tricky. Rather than clicking “next” or “back,” make sure to instead hit fast-forward or rewind. Also, there are no subtitles. However, the sound is available in both English and French in Dolby 5.1.

On top of the restoration, the Blu-Ray also includes some great extra features. There is a very entertaining commentary from Kevin Sullivan (with fantastic behind the scenes tidbits) as well as a new documentary about the life of L.M. Montgomery. If you love her as much as I do, then you’ll appreciate a nice peek into the life of a literary great.

As far as the miniseries goes, if you haven’t seen Anne of Green Gables yet, you should probably be asking yourself…WHY? Trust me, give it a watch. From the production to the story to the unforgettable performances, this adaptation is simply magical. It’s everything a good book adaptation should be. Whenever I compare book to film (or TV Show) adaptations, this original 1985 production is the standard to which I hold all others. It’s not the literal interpretation that’s important but rather the spirit of it. Sullivan (and the whole film and crew) did just that.

For those of you completely unfamiliar with the story, Anne of Green Gables is about the imaginative and romantic Anne Shirley, an orphan who is taken in by an elderly brother and sister in the late 19th century. The story follows Anne’s adventures of life, love, hardship, and tragedy as she grows into a young woman as well as an aspiring writer.

Besides Sullivan’s optimistic vision that truly encompasses the feel of a Montgomery novel, each of the performances were so perfect, it was as if each of them walked right out of the book. They were the characters more than they were actors which just goes to show how masterful each performance truly was.

Besides Sullivan’s optimistic vision that truly encompasses the feel of a Montgomery novel, each of the performances were so perfect, it was as if each of them walked right out of the book.

Megan Follows as Anne gave an inspired performance now so iconic, it will be hard for any actress to step into the role without a list of comparisons. The incomparable Colleen Dewhurst played Marilla Cuthbert, the woman who takes Anne in, with a dry wit and a heart of gold that made the dialogue jump off the pages. The Oscar-nominated Richard Farnsworth stepped into the shoes of the shy and lovable Matthew who gives Anne the fatherly love she always needed. Jonathan Crombie (who sadly passed away last year) captured the hearts of young women everywhere as the handsome and intelligent Gilbert Blythe who falls in love with Anne. Schuyler Grant plays Anne’s bosom friend Diana with an innocence and a lighthearted quality.

One of my favorite performances, however, belongs to the underappreciated Patricia Hamilton as Rachel Lynde. With so many notable quotes she could have her own advice column. As the town gossip, it’s amazing how lovable Rachel Lynde becomes as a character. It’s due in part I think to Hamilton’s pitch perfect performance. She IS Rachel Lynde.

In all, the nuance of each performance and the chemistry between all the actors help make this production even more magical.

I would be remiss if I didn’t cover the romance between Anne Shirley and Gilbert Blythe. People always joke about vampires and Mr. Darcy being their romantic ideal. For me, it was always about Gilbert. He’s the moral, integrity driven literary equivalent to Captain America – except, you know, more book smart. Plus, he’s witty, loyal and believes in imagination. The love/hate relationship that develops between Anne and Gilbert is memorable, to say the least. Especially as they grow closer over the progression of the story and become friends. It’s one of those love stories that is so genuine and heartfelt, we may all find ourselves wishing for our very own Gilbert after watching. Jonathan Crombie who played the boy next door perfectly will continue to be missed.

The look of the production matches the script and performances to create an overall classic masterpiece worthy of L.M. Montgomery herself.

On top of the story and acting, the cinematography is gorgeous as are the costumes and set design. When capturing an L.M. Montgomery story, setting, in fact, becomes very important. Each location must succeed as its own character and have a sentimental quality to it. From Green Gables to the Avonlea village, the Lake of Shining Waters and more, the look of it is critical. Thankfully, the look of the production matches the script and performances to create an overall classic masterpiece worthy of L.M. Montgomery herself. Whatever your opinion is of the sequels (I happen to love them and appreciate them on their own merit), this original is about as near to perfection as any adaptation can be.

The Anne of Green Gables Blu-Ray Edition is available to buy from Sullivan Entertainment.

What are your thoughts on Anne of Green Gables? Are you excited to see it restored? Let me know in the comments!

Our romance-themed entertainment site is on a mission to help you find the best period dramas, romance movies, TV shows, and books. Other topics include Jane Austen, Classic Hollywood, TV Couples, Fairy Tales, Romantic Living, Romanticism, and more. We’re damsels not in distress fighting for the all-new optimistic Romantic Revolution. Join us and subscribe. For more information, see our About, Old-Fashioned Romance 101, Modern Romanticism 101, and Romantic Living 101.
Pin this article to read later! And make sure to follow us on Pinterest.
By Amber Topping on March 10th, 2016