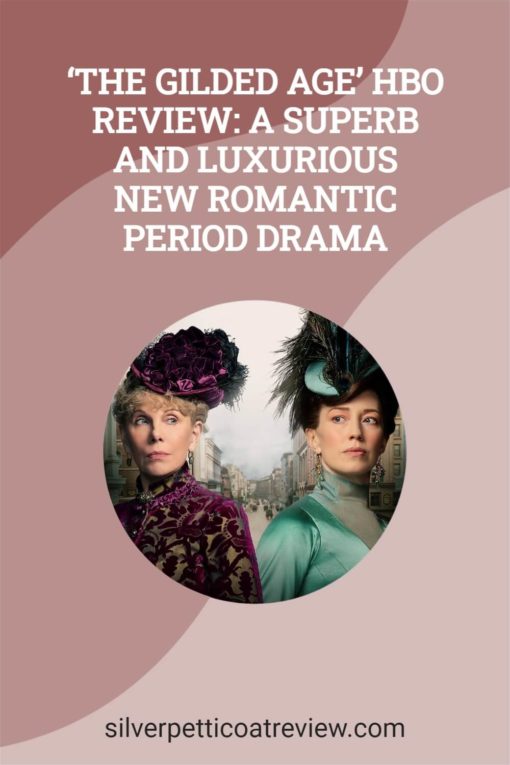 The Gilded Age on HBO Max is the long-awaited new period drama series from Julian Fellowes, Downton Abbey’s creator. It is set within the same world – only The Gilded Age takes place 30 years earlier in 1882 New York City.

It’s all very Edith Wharton-esque mixed with a touch of Kevin Sullivan’s Road to Avonlea and Fellowes’ signature style with both upstairs and downstairs characters taking center stage.

However, the main difference between the two series (Downton and Gilded) is that the sets and costumes are far more luxurious and grand with less likable characters. It also takes some time to adjust to the language style and the American accents.

RELATED: Where to Watch Downton Abbey: How to Stream the Romantic Period Drama Series

Still, if you’re looking for the perfect series to fill your Downton Abbey void, The Gilded Age is for you. The impressive and very romantic series is sure to please period drama aficionados worldwide with its witty dialogue, gorgeous costumes, diverse cast, extravagant sets, and promising romances.

Of course, it wouldn’t be a Julian Fellowes show without lots of scandals and scheming characters you love to hate.

But before I jump into my complete review of season one (what’s aired thus far), here is everything you need to know about the TV series currently airing on HBO Max.

Here is a little sneak-peak of the lavish costumes, sets, and a couple of exciting moments from the series. Watch the trailer above.

The show is set in 1882 and follows the story of Marian Brook, who moves from rural Pennsylvania after her father dies to New York City to live with her aunts. Marian then becomes embroiled in a social war between her aunt, part of the old-money set, and her wealthy “new money” neighbors, ruthless railroad tycoons – George Russell and his ambitious wife, Bertha Russell.

The Gilded Age episode 1 is somewhat reminiscent of the ’90s Canadian series, Road to Avonlea. Imagine Sara Stanley as an adult moving to live with her aunts in an unfamiliar setting, and you’d have Marian Brook.

Then you have the two aunts, one (Agnes Van Rhijn – played by the devilishly good, Christine Baranski) seemingly harsh and cold on the outside but lovable on the inside (you know, the Hetty King of the story), and then the sweeter aunt, Ada Brook – played by the perfectly cast Cynthia Nixon. She’s the Aunt Olivia.

The setup of Avonlea and The Gilded Age is similar, but where one is nostalgic and cozy, the other is excessively extravagant (purposely so to make a point) and cold. But I imagine the relationship between two aunts and their niece from their estranged brother will feel familiar to fans of the Canadian series or any L.M. Montgomery story.

After the setup, the story diverts entirely from being Avonlea-esque and becomes more like an Edith Wharton Novel meshed with an American Downton Abbey.

And that’s all a good thing – as much as I love Avonlea. The coziness wouldn’t suit the excessive extravagance of The Gilded Age. Fellowes presents just the right tone for the story, although I imagine the chilly Wharton style of social realism (which becomes more apparent by the end of episode 3) may turn off some viewers expecting something altogether happier and romanticized.

That said, it’s got enough of that romantic style to keep period drama fans interested. While not as romanticized as Downton or Avonlea, it is undoubtedly not a gritty, dark period drama either. The Gilded Age is classy and sophisticated and not vulgar or seedy.

For more details on the story, check out the official synopsis.

Besides the brilliant Christine Baranski – delivering lines with the sharpest of tongues and giving Maggie Smith a run for her money – and Cynthia Nixon, Louisa Jacobson (the daughter of Meryl Streep) plays the protagonist, Marian Brook. Marian is Jacobson’s debut role, and she’s a bit green overall but is still good and seems to get better with each episode.

Carrie Coon delightfully plays the ambitious Bertha Russell intent on entering the old money society in New York, even though she’s currently not welcome due to her being new money. Morgan Spector from Homeland plays Bertha’s equally ambitious and even ruthless husband.

Their two children (both surprisingly sweet and unaffected) include Poldark‘s Harry Richardson as Larry and Taissa Farmiga as Gladys. Larry is one part of a love triangle between Marian and a lawyer. I have yet to decide who she should end up with at the end!

Across the street, Blake Ritson plays Agnes Van Rhijn’s grownup son, Oscar. He has some secrets and wants to marry Gladys for her money and naivety.

Another main character within the Van Rhijn household is the young black woman, Peggy Scott, played by Denée Benton. She works as Agnes Van Rhijn’s secretary while also pursuing a career as a writer.

Other notable characters include the lawyer, Tom Raikes (Thomas Cocquerel), a seemingly charming and kind man with a keen interest romantically in Marian Brooke, despite her aunt Agnes’s disapproval.

It’s a lot of characters, I know! But that is Julian Fellowes’s specialty, so it’s not overwhelming. Every character has a purpose and enters at the appropriate times and places without becoming confusing.

For a complete list of the major players in the show, check out the official guide from HBO and the list of who’s who in the HBO period drama series.

THE TIME PERIOD: WHEN WAS THE GILDED AGE?

Set in the American Golden Age, the series begins in 1882, right in the era’s middle. The historical Golden Age lasted between 1870 and 1900, representing a time of prosperity (among certain classes), modernization, industrialization, and economic growth in the United States.

However, much inequality and poverty still existed, especially amongst the immigrants. And unsurprisingly, there were huge disparities between the poor and the wealthy.

One imagines more of those disparities will become apparent as the series progresses.

COULD THE DOWAGER COUNTESS MAKE AN APPEARANCE?

Downton Abbey began 30 years later in Edwardian England in 1912. So, does that mean the Dowager Countess could make an appearance? Well, yes!

RELATED: Tea With The Dames: Watch An Amazing Conversation With Four Legends

According to Julian Fellowes, the Dowager Countess (a young Violet Crawley) could appear in The Gilded Age at some point. Although, it’s unlikely to happen in season one.

Fellowes told The Telegraph a few years ago while discussing the show that it might be fun to see a young Violet with her two children in the 1880s. So, crossing my fingers, it happens!

So, is The Gilded Age worth streaming? Absolutely!

The series is the brainchild of the creator and executive producer behind Downton Abbey, Julian Fellowes. It has the same feel, grandeur, and intrigue as his previous work, just with more extravagance.

This new drama also has much to offer audiences in diversity, romance, humor, and scandal. It’s an absolute treat to see an American period drama on this kind of scale.

Now, The Gilded Age is a slow-burn and takes some time to grab your attention. But as soon as Baranski begins spouting off intelligent dialogue, it’s hard not to be hooked.

THE PRODUCTION DESIGN AND COSTUMES

Plus, watching the series is like walking through an elegant museum. The sets and production design are simply spectacular—some of the best I’ve seen in any period drama.

And then there are the costumes. Oh, the costumes! The ladies’ dresses, the gentlemen’s suit jackets. Costume designer, Kasia Walicka-Maimone, revealed that more than 5000 costumes were custom-designed for the series.

Visually, The Gilded Age is a dream.

While it’s too soon to tell on whether The Gilded Age will be as unabashedly romantic as Downton Abbey, the romances are thus far proving to be VERY promising; especially the entertaining love triangle between Larry, Marian, and Tom!

OVERALL THOUGHTS ON THE HBO DRAMA

Overall, The Gilded Age is one of the must-see period dramas of the year. The acting, the production design, the scripts, and the costumes are all top-notch.

However, the show’s initial slow pace might put viewers off at first, but it does pay off in the end. And the drama is well-paced, gaining momentum with each episode.

All in all, HBO has found another timeless, classic period drama to rival Downton Abbey and its movies. And we can’t wait to see how the rest of the 9-episode season plays out.

Fans of The Age of Innocence should love this one!

(UPDATE: The Gilded Age has been renewed for season 2!!!)

Where to Watch: New episodes premiere on HBO MAX on Mondays at 9 pm. You can also watch the series on HBO NOW.

Content Note: The series is rated TV-MA but is overall mild. It feels more TV-PG/TV-14 minus one scene in episode four.

Episode one includes a passionate bedroom scene (just kissing) at the end of the first episode. A transparent nightgown is shown in episode three with a bit of non-vulgar nudity.

One disturbing scene of violence (primarily offscreen) happens in episode three. There is explicit nudity in episode four, but overall, the series is mild for a TV-MA series.

Will you watch The Gilded Age? If you’ve been watching, what do you think? Do you agree with our review of The Gilded Age? Do you like Julian Fellowes’ new series? Discuss in the comments below!