In the last couple of years, I’ve begun expanding my viewing to include international television series. It started with a Tumblr recommendation to watch Grand Hotel, which introduced me to Spain’s excellent Downton Abbey equivalent. Thereafter, things escalated quite quickly.

My first Turkish production was Magnificent Century, which truly had me so hooked I inhaled what felt like a million episodes. The lesson learnt is that there is a veritable buffet of incredible television produced across the world. Spain, South Korea, Turkey, Italy – all countries with booming television industries producing incredible content.

Based on a novel by Nermin Bezmen, the granddaughter of the real Kurt Seyit, Kurt Seyit and Sura is a Turkish gem guaranteed to sweep you off your feet. 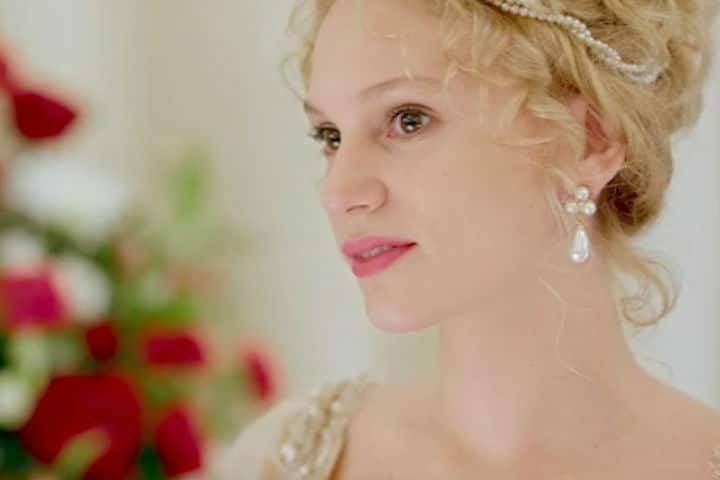 Sura, You Are So Pure, So Beautiful

Kurt Seyit and Sura is centered around WWI and tells the story of Seyit Eminoff (Kivanç Tatlitug), a handsome, principled Turkish lieutenant who falls in love with Sura (Farah Zeynep Abdullah), the privileged daughter of an aristocratic Russian family. Although it’s love at first sight for Seyit and Sura, there are mountains of obstacles to barrel through in the name of their blazing love.

Seyit’s family, for example, wants him to marry a Turkish woman who shares their culture and background. His best friend Pietro (Birkan Sokullu) plots in secret to separate Seyit and Sura as part of a long term revenge scheme. In addition, Sura’s self doubt acts as an ever present agent which challenges fate’s plan for the lovers to finally find their happy ending.

Every breath you take is my breath. Your name is a prayer on my lips. I repeat it at every waking moment. All my prayers are for you. My love for you cannot be described.

As war escalates, Seyit must leave to fight on the front lines. Eventually the lovers flee to Istanbul in an attempt to start their life together. But their troubles continue to present them with challenges. Will Seyit and Sura win the battle for their love, or will Pietro and Seyit’s family destroy it?

You Are My Reason For Staying Alive 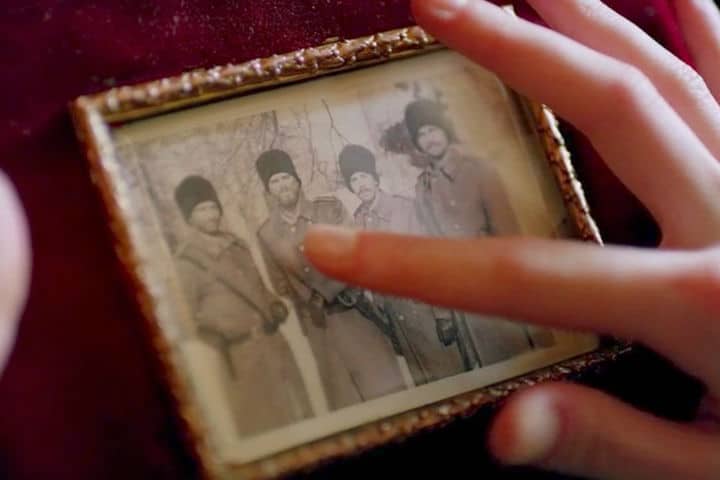 It must be said that Kurt Seyit and Sura is deeply romantic. Deeply. The initial episodes in particular play like the perfect historical romance. The will-they-won’t-they aspect is bursting with incredible romantic tension – enough to ensure you binge the first four episodes at least. I don’t recall a show in recent memory that is so unapologetically focused on romance. The longing stares, the stuttered breath, the goosebumps you feel on behalf of the couple on screen. Its incredible, its palpable and I greedily consumed it with glee. The writing is also quite poetic. Some of the dialogue is just divine, while others do have a whiff of cheese.

First you used your eyes as skillfully as you use your gun first lieutenant. You shot me right through the heart. Then you held me captive with your love.

Kivanç Tatlitug, the hero of the story, is probably the most handsome man currently wandering the earth. He’s like a young Brad Pitt, only 1000 times more striking. I’m also pleased to announce that he is a powerhouse of raw emotion. Quite possibly the best actor in the cast, he is magnificent at every turn. 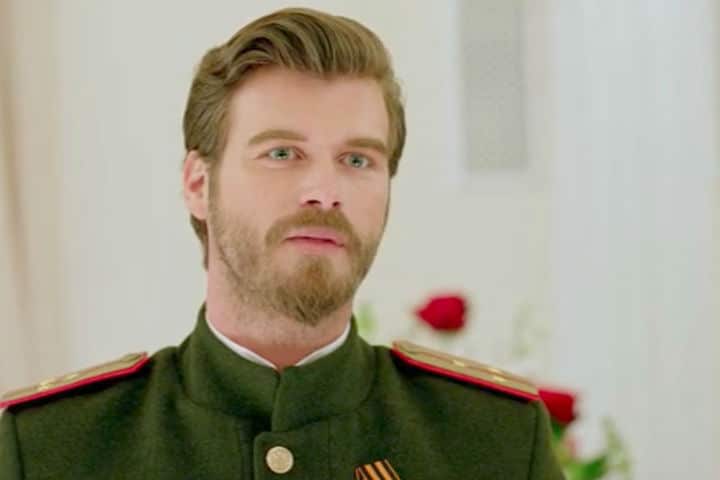 Seyit is passionate, loyal but also quiet, thoughtful and sensitive. He understands his duty but also wears his heart – especially his feelings for Sura – quite plainly on his sleeve. It’s not an easy role to play but in the hands of Kivanç Tatlitug, Seyit is truly a three dimensional, well rounded character. I know I’ve just mentioned this, but he’s also seriously, seriously good looking. Those eyes! The beard! His smile! A lethal combination designed to have you reaching for your smelling salts. So be warned. Have them well on hand!

Beside him, Farah Zeynep Abdullah is a good match. The strength and the intensity of her performance grows as the series progresses until she matches Tatlitug. On screen, their chemistry is quite palpable and when they finally meet each other (it takes a minute) I found myself biting my fist in anticipation. The evolution of their relationship is an interesting one to watch unfold. The romance remains high on the writers’ agenda though, so despite the numerous challenges, the romantic undertones remain firmly in place.

Sisters, friends, extended families and Pietro, a smirking ne’er-do-weller, all form part of Kurt Seyit and Sura’s sprawling ensemble cast. Some of the alternate storylines are interesting, others are not. There are a few that fall prey to underdeveloped writing, but this is not unique to this production. Birkan Sokullu has arguably the largest role apart from the leads, as he plays Seyit’s best friend and covert rival.

I Would Like To Make This Moment Last Forever 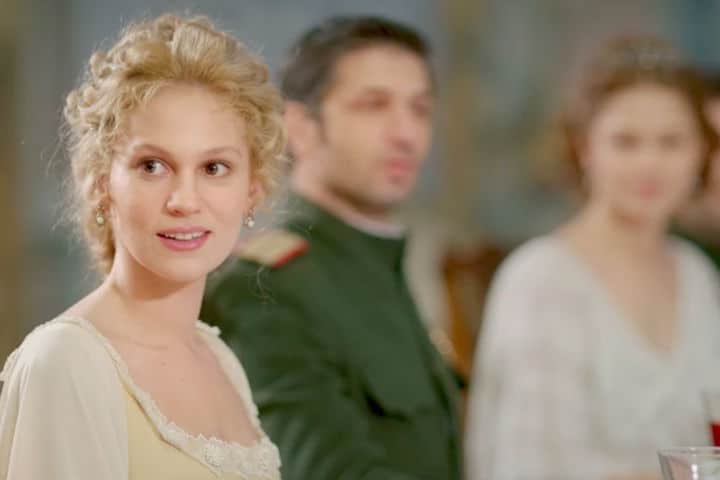 There is a lot to love about Kurt Seyit and Sura. The cast is stellar and the production values incredible. In addition, the costumes are sublime and the cinematography in particular puts this in league with the recent War and Peace adaptation. The story is incredibly emotional – perhaps to some western audiences it might seem a little over the top. For example, there is a lot of crying by the male and female cast members. I quite enjoyed the equal opportunities to show emotion for both genders.

Holding your hand is not just a blessing. It’s a need for me. Like my heartbeat. Like the air I breathe.

The more dramatic elements also eventually dilute some of the high production values, veering the show into soap opera territory. Despite that, the central messaging about honour, love, friendship and family is impressive. Alongside it, while the series serves up bottomless angst and romance, it does not default to graphic or even gratuitous sex scenes. This means that for the most part, everyone can enjoy Kurt Seyit and Sura.

RELATED: 50 of the Most Unabashedly Romantic TV Shows

There is however, a lot to vex. As the series progresses, melodramatic elements become a little grating. Character inconsistencies emerge and storytelling mechanisms appear out of nowhere (voiceovers for example). Thankfully they also disappear later, so it’s par for the course. In addition, over-reliance on slomo techniques and particular pieces of the score becomes tiresome when repeatedly visited. Pietro as a character (and also the main villain) becomes eye-roll inducing (and literally moustache twirling) and does tend to test one’s patience. 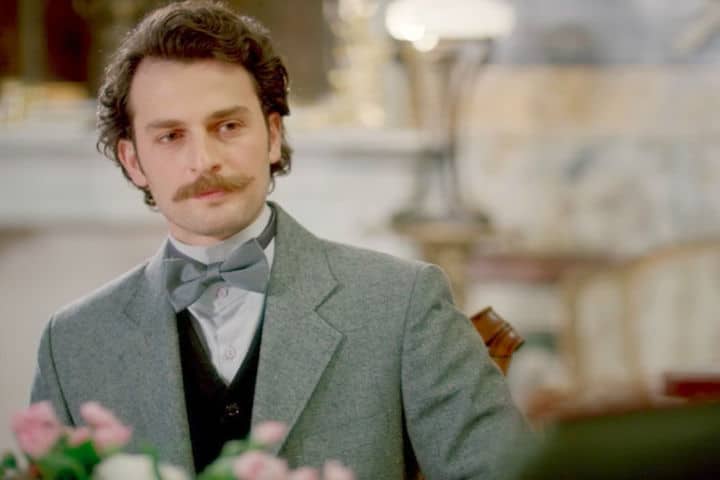 The ending of the series might also be a challenge for some. While it’s happy, it might not be the brand of happy you’re shopping for.

That said, Kurt Seyit and Sura is well worth wading through some of the anachronisms to experience the butterfly inducing, angst riddled, yet riveting romance.

I Entrust My Heart To You

There is a lot to get through with Kurt Seyit and Sura. With 46 episodes, each generally a solid hour, it’s a lot of television to consume. I’d recommend taking your time. There is also a lot to digest.

Overall, if you love period drama and a healthy dose of swoon worthy romance, Kurt Seyit and Sura will not disappoint. The show is subtitled, so if that’s a challenge for you, be strong. It’s well worth it.

Where to Watch: Kurt Seyit and Sura is available to stream on Netflix US.

Have you watched Kurt Seyit and Sura? Did it induce swooning on a constant loop? Comment below and let me know!

Our romance-themed entertainment site is on a mission to help you find the best period dramas, romance movies, TV shows, and books. Other topics include Jane Austen, Classic Hollywood, TV Couples, Fairy Tales, Romantic Living, Romanticism, and more. We’re damsels not in distress fighting for the all-new optimistic Romantic Revolution. Join us and subscribe. For more information, see our About, Old-Fashioned Romance 101, Modern Romanticism 101, and Romantic Living 101.
By Naazneen Samsodien on November 7th, 2017