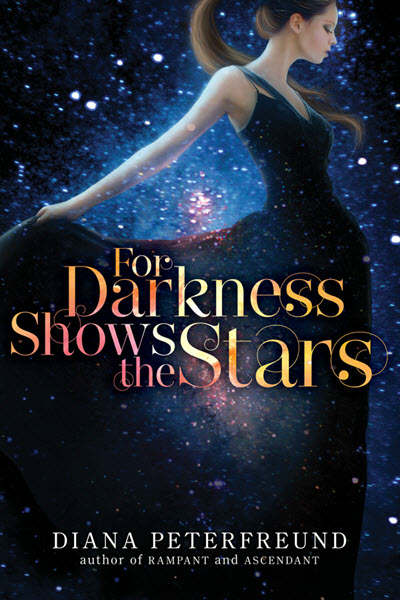 Official Synopsis of For Darkness Shows the Stars: Generations ago,  a genetic experiment gone wrong—the Reduction—decimated humanity, giving rise to a Luddite nobility who outlawed most technology.

Eighteen-year-old Luddite Elliot North has always known her place in this caste system. Four years ago Elliot refused to run away with her childhood sweetheart, the servant Kai, choosing duty to her family’s estate over love. But now the world has changed: a new class of Post-Reductionists is jumpstarting the wheel of progress and threatening Luddite control; Elliot’s estate is floundering; and she’s forced to rent land to the mysterious Cloud Fleet, a group of shipbuilders that includes renowned explorer Captain Malakai Wentforth—an almost unrecognizable Kai. And while Elliott wonders if this could be their second chance, Kai seems determined to show Elliot exactly what she gave up when she abandoned him.

But Elliot soon discovers her childhood friend carries a secret—one that could change the society in which they live…or bring it to its knees. And again, she’s faced with a choice: cling to what she’s been raised to believe, or cast her lot with the only boy she’s ever loved, even if she has lost him forever.

Related Post: 50 Books to Read if You Love Jane Austen

For Darkness Shows the Stars Review

Of all Jane Austen’s novels, Persuasion holds a special place in my heart. The premise of For Darkness Shows the Stars intrigued me yet, I was apprehensive. How could anyone take one of Jane Austen’s most heartbreaking stories and recreate it into something unique yet true to the spirit of the original story? It took less than one chapter to captivate me. Before I knew it, it was two in the morning and I was crying over the beauty of this story.

While For Darkness Shows the Stars is a futuristic retelling of Persuasion, it also very much stands on its own merits. It is a classic story of love and loss amidst a crisis of faith. When we meet Elliot, she is a young woman with great responsibility. Haunted by her choices, her life is heavy with regret and resignation. The desolation leaps off the pages as she struggles to keep the family estate prosperous. Her father and sister appear to unknowingly sabotage her efforts, driving their family deeper into debt. Still, Elliot does not succumb to despair. Then, Kai re-enters her life.

The Innocent Realities of Childhood

Author Diana Peterfreund’s approach to Elliot and Kai’s story is masterful. Their friendship is told in flashbacks through letters written over the course of seven years. Their exchanges are filled with innocence. Yet, there is the simplicity of a child’s observation that rings loudly. They know their stations in life and their letters stunningly highlight their differences.

It’s in these letters we also see the beginning of Elliot’s inquisitive mind. We see her struggle to make sense of what she believes is the natural course of order with the education she receives from Luddite teachers. We also see Kai’s emerging frustration with the lack of progress in their world. Emotionally devastated at a young age, he rails against the Luddites refusal to pursue advances. He rants against their fear of the past. Through his letters to Elliot, we see glimpses of the man he could become.

“You say that the protocols are to keep us from playing God. But I think you have it backward. When we have the ability to save someone’s life, and we decide they aren’t worthy of being saved-isn’t that playing God as well?”

The flashbacks are perfect in the sense that they don’t take over the story. Instead, they establish a parallel with the present time when Elliot and Kai meet again. These letters are the stories of their youth; who they were and glimpses of who they would become.

One of the themes of For Darkness Shows the Stars is the age-old argument of religion versus science. The post-apocalyptic world was the result of mankind attempting to remake their DNA. They wanted to be faster, stronger, more handsome or beautiful. These experiments had an opposite effect and resulted in a generation known as the Reduced. As a result, in addition to outlawing almost all technology, the Luddites implemented protocols that prohibit advances in medicine or any other advances that alter the original state of a person….or thing.

Elliot is in perpetual conflict. Raised in the Luddite tradition, she adheres to the core beliefs. Yet, she takes action to save her estate that is in direct contradiction with her faith. Elliot’s sense of self is uncertain as she battles to find some middle ground. This duality in her nature is striking. Especially in light of Elliot’s own actions. Peterfreund’s exploration of Elliot’s doubts and the anxiety that constantly runs through her is powerful. It’s almost as if you can hear Elliot’s internal screaming as she struggles to reconcile the past and the future.

At the heart of For Darkness Shows the Star is, of course, the romance between Elliot and Kai. They were just discovering the depths of their feelings for one another when Kai left. There was a joyous wonder, a sense of invulnerability.

“How many times have our hands touched, when we were passing each other tools or helping each other in and out of machines? Hundreds of times. Thousands. But last night, it felt different.”

The echoes of first love made Elliot and Kai’s reunion all the more heartbreaking. The shock Elliot feels at Kai’s return quickly becomes devastation. Yet, it is nothing compared to the pain. It is breathless in its agony despite the joy spearing through Elliot. However, Kai is coldly remote. Each encounter is a dagger to the heart as Kai’s contempt saturates every direct and indirect interaction. Elliot’s anguish is palpable. Her sorrow at these changes she sees in Kai strikes at you with every word.

What’s worse, is Elliot’s belief she is deserving of his coldness. She is just as ruthless in her self-recriminations as Kai is with his callous disregard.

“Kai! Stop it. Stop it right now. You can be as cruel as you want to me and I’ll bear it with no complaint. But do not take your anger out on these people who have never done anything to you.”

The juxtaposition of Elliot and Kai’s current relationship with that of their childhood only enhances the angst that permeates every encounter between them. Their romance is breathtaking in its joy and sorrows. There were times I quite literally felt a pang in my heart. I cried with Elliot, feeling her pain keenly.

For Darkness Shows the Stars is in the third person. Yet, the author does not explore the emotions or thoughts of other characters. While this is common in storytelling, normally the missing detail is provided in other ways. That was missing in this story. At times, I found myself dying for just a peek at what was going through Kai’s head. What was he truly feeling? Did seeing Elliot for the first time in four years affect him as much as it did her? In addition, this lack of exploration also left other characters flat and lacking in development. For example, Dee is a central figure in Elliot’s life. More so than her father and sister, yet we only get the smallest glimpse into her psyche.

The bioethics debate of the story was also a bit too simplistic. While beautifully written, Elliot’s quandary was not original. We’ve seen this theme in myriad ways in any number of novels. There was nothing unique about this particular variation. It was so simplistic as to almost come across as an afterthought. However, despite these small faults, For Darkness Shows the Stars is a truly beautiful and unique retelling. The spirit of Persuasion floats across the pages, lending this dystopian story an exquisite air in the genre.

Check out For Darkness Shows the Stars and let me know what you think in the comments below!

Our romance-themed entertainment site is on a mission to help you find the best period dramas, romance movies, TV shows, and books. Other topics include Jane Austen, Classic Hollywood, TV Couples, Fairy Tales, Romantic Living, Romanticism, and more. We’re damsels not in distress fighting for the all-new optimistic Romantic Revolution. Join us and subscribe. For more information, see our About, Old-Fashioned Romance 101, Modern Romanticism 101, and Romantic Living 101.
Pin this article to read later! And make sure to follow us on Pinterest.
By Catherine on June 1st, 2017