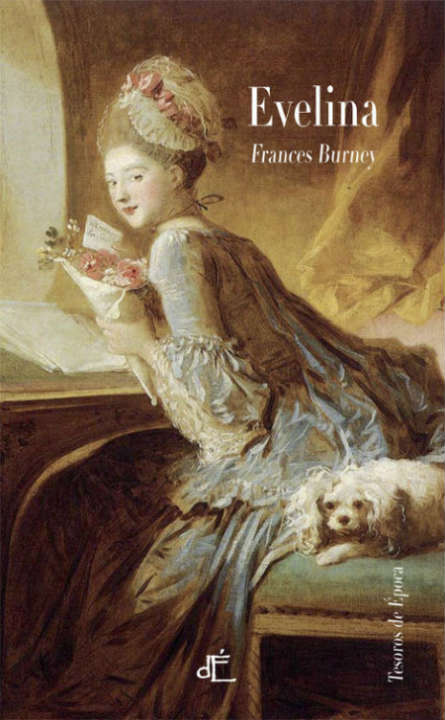 I’m convinced that Evelina should get a lot more love than it does. Written in 1778 by Fanny Burney, it’s a kind of “Jane Austen before Jane Austen,” and undoubtedly an influence on the young Jane. Evelina contains many of the same themes and motifs as Pride and Prejudice or Sense and Sensibility: class snobbishness, navigating a complex world of etiquette, emotionally charged moments at balls, embarrassing relatives, a seductive suitor (called Willoughby!) and a gallant and sensible hero, the lovely Lord Orville. But it has more action in it than Jane Austen typically puts in her novels. Who could read Evelina and ever forget the fake highway robbery, the attempted suicide, or indeed the bizarre race between two old ladies?

And the novel certainly isn’t short on romantic moments.  The greatest of them all comes at the climax of the story, as we face the two age-old questions: Will he propose? Will she say yes?

The reason this romantic moment works so well is because of all the smaller moments that have led up to it, and in particular all the misunderstandings that drive Evelina and Lord Orville apart every time it looks like they’re about to get together.  16-year-old Evelina is thrust into the fashionable world of the 1770s for the first time, in the hope that her aristocratic father will finally acknowledge her.  Having been brought up in the countryside by a vicar, she has no idea how to deal with the variety of characters she meets, and ends up being dragged hither and thither by different groups of friends and relatives.  She is always writing to her guardian the vicar for advice, but as he is not on hand to assess the situation personally, his advice often does more harm than good.

The first time Evelina and Lord Orville meet at a ball, he thinks she must be stupid because she can’t think of anything to say to him.  But as soon as he realizes she’s just inexperienced, he becomes her unofficial protector.  He is terribly worried when she gets into a coach alone with bad Sir Clement Willoughby, and rushes to her lodgings to make sure she gets home unscathed.  He comes to call on her (again to make sure she is all right) after seeing her in Vauxhall pleasure gardens with some ladies of ill repute.  (Another honest blunder on Evelina’s part).  However, as the misunderstandings build up, poor Lord Orville finds himself being pushed away, even though that’s the last thing Evelina wants.  Towards the end of the book, Evelina is staying at Lord Orville’s house in Bristol with his sister and friends, where they get to know each other better.  When heartless friends offend her, he says he will be a brother to her.  Unfortunately, Evelina has just discovered she has a brother, whose relationship to her must be kept secret.  You can imagine how Lord Orville feels when he discovers them meeting together.  Worse still, Evelina’s guardian writes to advise that an aristocrat like Lord Orville can want only one thing from a pretty girl with no fortune – and it’s not marriage!  And then Sir Clement turns up…

We can only feel Lord Orville’s pain when he says: “I greatly fear that I have been so unfortunate as to offend you…  Tell me, my dear Miss Anville – my new-adopted sister, my sweet and most amiable friend! – tell me, I beseech you, if I can afford you any assistance?”

And Evelina’s when she writes: “Never, never can I cease to regret that I have lost the friendship of Lord Orville! – Oh, Sir, I have slighted, – have rejected, – have thrown it away!”

However, as the mist of confusion begins to clear, a new hope surfaces…

Evelina comes downstairs in the morning to find Lord Orville alone in the parlour.  There follows a flood of embarrassed stammering:

Orville: If I disturb you, Miss Anville, I am gone.

Evelina: My Lord, I did not mean to stay.

Orville: I flattered myself I should have a moment’s conversation with you.

Lord Orville then describes how Evelina has been avoiding him.

Evelina: Oh, my Lord, your too, too great politeness oppresses me! – you have done nothing, – I have never dreamt of offence – if there is any pardon to be asked it is rather for me, than for you to ask it.

Orville: Is it, in any measure, to Sir Clement that I my attribute the alteration in your behaviour to myself?

Evelina: To Sir Clement, my Lord, attribute nothing.  He is the last man in the world who would have any influence over my conduct.

At this point, the conversation is interrupted by dinner, during which: “Lord Orville was all gaiety; never did I see him more lively or more agreeable.”  Evelina, on the other hand, is weighed down by the prospect of a meeting with her estranged father (arranged at long last) and that this will therefore be her last day at Lord Orville’s house.  After dinner, she goes to retrieve some books from the parlour.  Lord Orville follows her…

Orville: Is this true, Miss Anville, are you going?

Evelina: I believe so, my Lord.  (Still looking for the books).

Orville: So suddenly, so unexpectedly must I lose you?

Evelina: No great loss, my Lord.  (Endeavouring to speak cheerfully).

Orville: Is it possible Miss Anville can doubt my sincerity?

Evelina: I can’t imagine what Mrs Selwyn has done with these books.

Orville: Would to Heaven, I might flatter myself you would allow me to prove it.

Evelina: I must run up stairs and ask what she has done with them.

Orville: You are going, then (taking her hand) and give me not the smallest hope of your return! – will you not, then, my too lovely friend! – will you not, at least, teach me, with fortitude like your own, to support your absence?

Evelina: My Lord (endeavouring to disengage her hand), pray let me go!

Orville: I will (dropping on one knee), if you wish to leave me!

Evelina: O, my Lord, rise, I beseech you, rise! – such a posture to me! – surely your Lordship is not so cruel as to mock me!

Orville: Mock you!  No, I revere you!  I esteem and I admire you above all human beings! you are the friend to whom my soul is attached as to its better half! you are the most amiable, the most perfect of women! and you are dearer to me than language has the power of telling.

“I attempt not to describe my sensations at that moment; I scarce breathed; I doubted if I existed, – the blood forsook my cheeks, and my feet refused to sustain me; Lord Orville, hastily rising, supported me to a chair, upon which I sunk, almost lifeless.”

As in Jane Austen, the most intimate moment of the proposal is kept private.  But Lord Orville is still on his knees when Mrs Selwyn comes in.  An embarrassed moment, as the lovers hastily separate.

Mrs Selwyn: My Lord (sarcastically), have you been so good as to help Miss Anville look for my books?

Orville: (attempting to rally) Yes, Madam, and I hope we shall soon be able to find them.

Mrs Selwyn: Your Lordship is extremely kind, but I can by no means consent to take up any more of your time.

She goes to the window-seat, finds the books instantly, gives one each to Lord Orville and Evelina, and leaves with the third.  The proposal ends in laughter.

It is a perfect, English romantic moment.  Humour, embarrassment, and long-restrained emotions that can be restrained no longer.  Now all we need is for someone to adapt it into a period drama.

Our romance-themed entertainment site is on a mission to help you find the best period dramas, romance movies, TV shows, and books. Other topics include Jane Austen, Classic Hollywood, TV Couples, Fairy Tales, Romantic Living, Romanticism, and more. We’re damsels not in distress fighting for the all-new optimistic Romantic Revolution. Join us and subscribe. For more information, see our About, Old-Fashioned Romance 101, Modern Romanticism 101, and Romantic Living 101.
Pin this article to read later! And make sure to follow us on Pinterest.
By Elizabeth Hopkinson on July 4th, 2015