BBC’s production of North and South is arguably one of the most romantic period dramas to date. The dreary skies of Milton witness the gorgeous romance unfold between Margaret Hale and John Thornton. Their chemistry is instantaneous and beautiful in its evolution. From an unwilling attraction to love, the story of their romance is legendary. Don’t believe me? Drop into Twitter or Tumblr and search the North and South hashtag. It’s glorious!

I think it’s fair to say that John Thornton’s brooding nature plays a large part in the swoon-worthy nature of this romance. His name alone evokes a range of emotions: sighs of delight, groans of disappointment, and heartache at his declaration of love.

John Thornton of Milton has a number of memorable moments throughout North and South. In fact, he has so many it’s almost impossible to pick out favorites. Whether his romantic intensity, his more boorish tendencies, or the glimpses of vulnerability, John is nothing if not memorable.

Below are 15 romantic memorable moments from North and South’s John Thornton. These moments are ones that linger in the mind long after the scene is over. Of course, this list is completely subjective although I’m quite sure there are a few below that everyone can agree on. And let’s be honest, any list featuring John Thornton is a list worth a leisurely read!

(In Chronological Order of North and South) 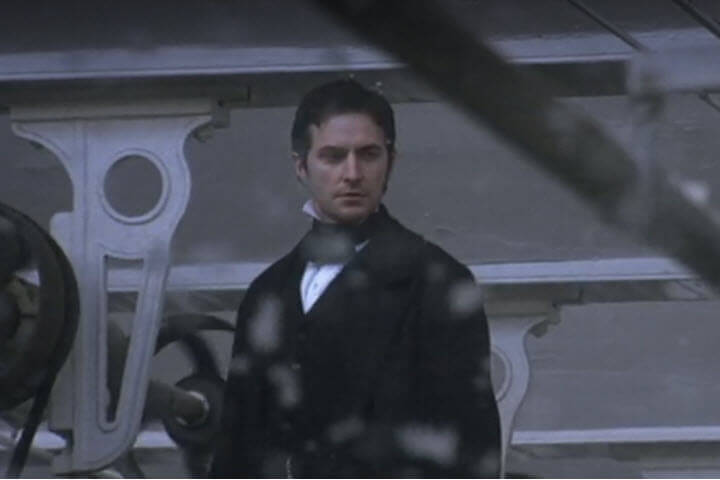 It’s a brief moment. Seconds. Margaret is roaming the sorting room and stops short when she first sees John Thornton. It’s quite an entrance. Moreover, he makes quite an impression! Despite the stern expression, there is something alluring about him. That is until he starts yelling….. 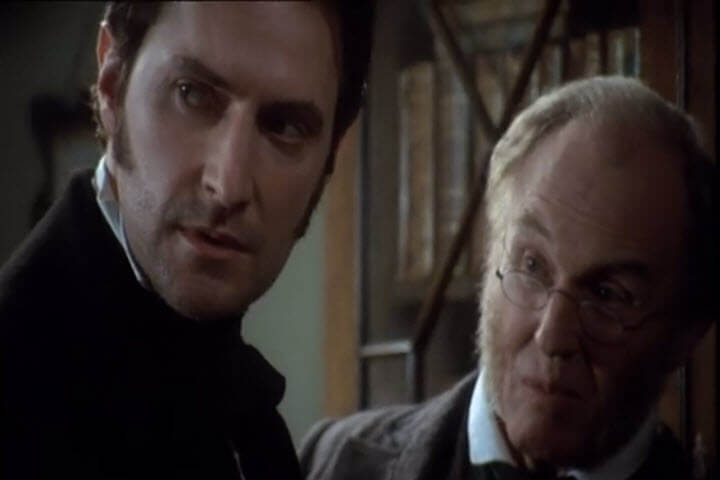 The first time John Thornton formally meets Margaret Hale. There is an instant attraction despite their differences. John is harsh while making his point. He doesn’t pull his punches. He sounds defensive. But, as he takes his leave, John gives one last considering look at Margaret.

#3 The Tea was in No Danger of Going Cold 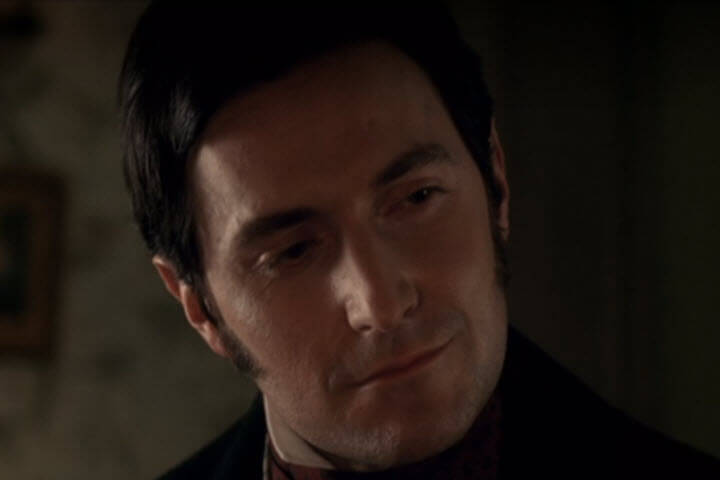 One of the most romantic moments in North and South. The intensity of John’s stare as Margaret pours him tea is incredibly sexy. However, it’s this moment. The way his lips curve into the slightest of smiles. It’s almost secretive and all the more seductive for it!

#4 When John Thornton Hung on Margaret’s Every Word 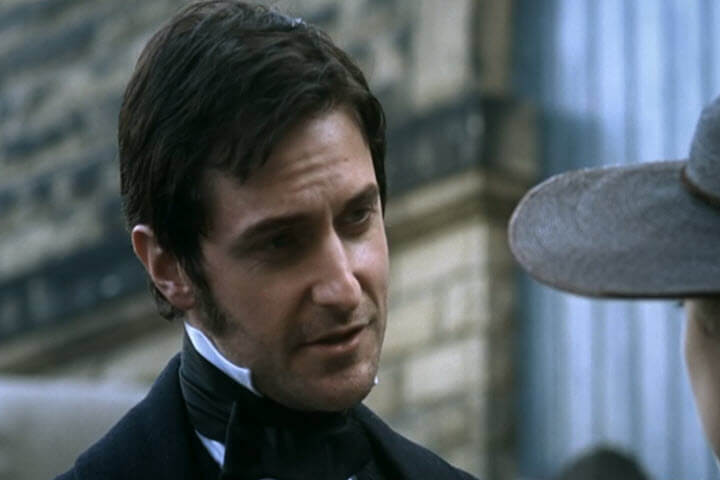 So many of Margaret and John’s conversation devolve into arguments. Yet, this one began and ended quite pleasantly. Sure, each passionately argued their viewpoint but there was a new feeling here. One of respect.

#5 Please Like Margaret Because I Think I Love Her, Okay? 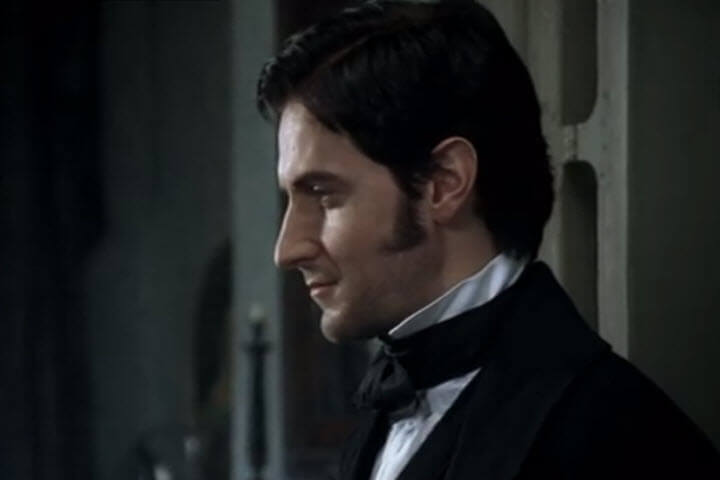 One of the first times we glimpse a vulnerable John Thornton. The quiet way he asks his mother to try to like Margaret is so sweet. It’s clear that his original dislike is changing into something more. The wistful look on his face as he acknowledges that Margaret would never have him is so angsty! 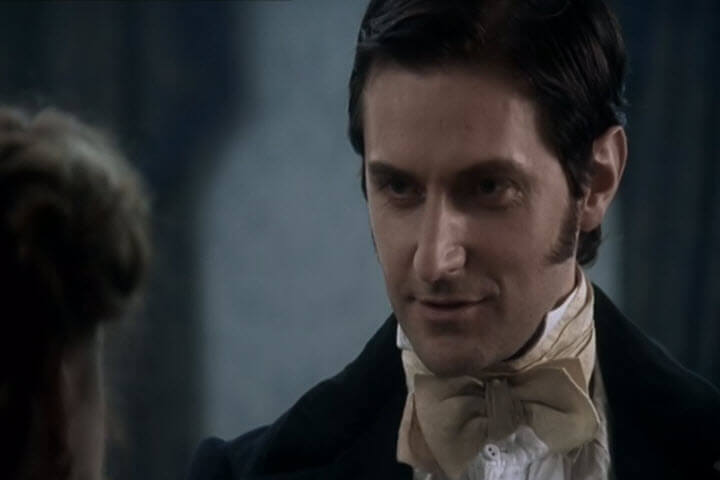 One step forward, two steps back. Sometimes, half a dozen steps back. At this moment, however, John takes several steps forward as he smiles down at Margaret after she shakes his hand in the Milton way. I admire how Margaret remains standing. Me? I’d be a puddle on the floor!

#7 You Are So Worthy John Thornton 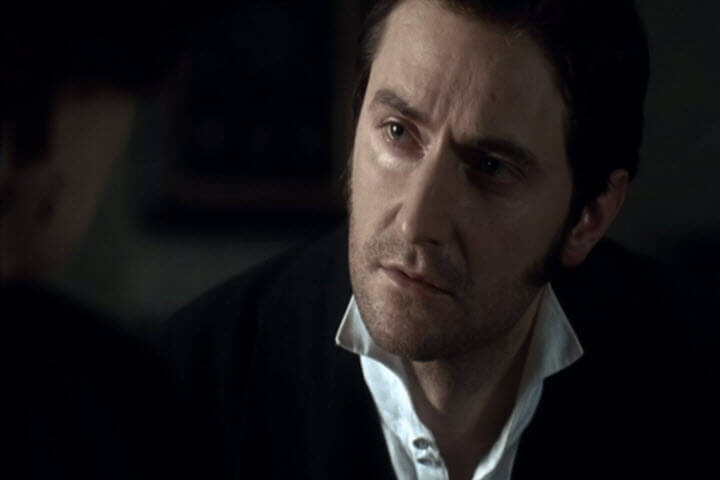 Before, it was a glimpse of vulnerability. This time, it is all here on display. Self-doubt. Yearning. Hope. John knows how he feels but is quite certain Margaret doesn’t feel the same. This John Thornton is quite the contrast to the confident one that regularly spars with Margaret.

John’s passionate declaration of love is one for the ages. It’s honest and raw. There is outrage at Margaret’s accusations and a sense of disbelief. This moment was so memorable, it was impossible to capture in a single screenshot. So, enjoy a video and watch it over and over again! 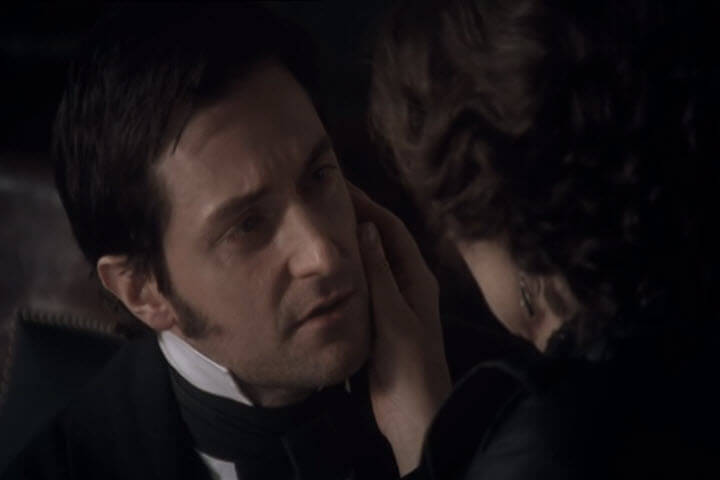 Some of John Thornton’s most memorable moments are with his mother. Their relationship is strong. She obviously adores him. And this moment here, when he tells her Margaret would not have him, that he knew he was not good enough for her? It makes my heart ache. 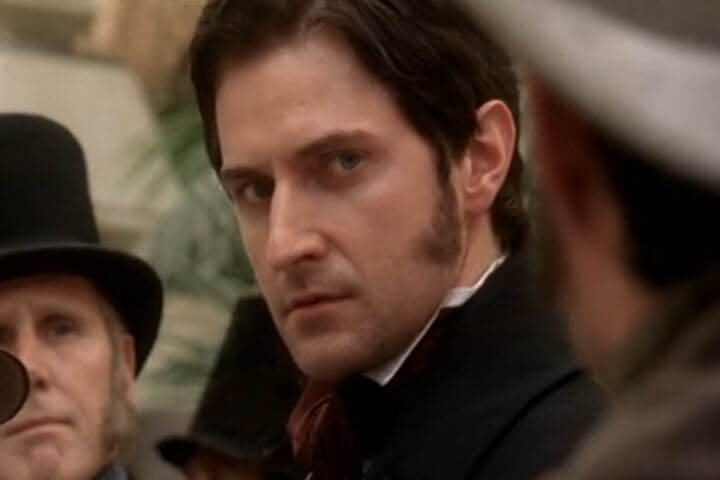 If looks could kill, the next scene may very well have been Henry’s funeral. This flash of jealousy clearly showed viewers John Thornton remained deeply in love with Margaret.

#11 When All of Us Shook Our Heads at John Thornton 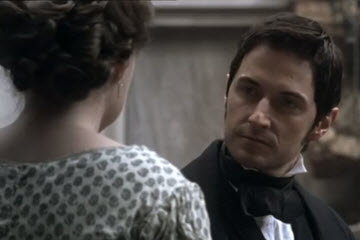 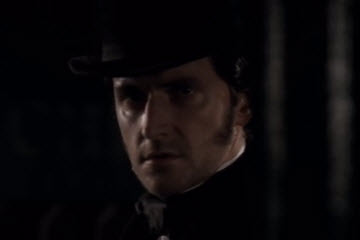 John Thornton seems to always jump to conclusions when it comes to Margaret’s actions or intentions. And in both these scenes, he jumps high despite knowing Margaret as he does. The jealousy fairly reaches out and grabs you. 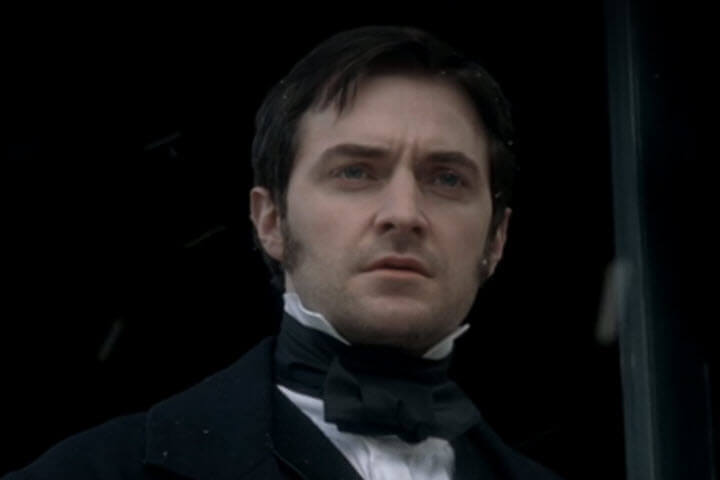 This angst-filled scene of Thornton watching Margaret leave never fails to move me. The plaintive way he whispers, begging her to look back. The intensity of his stare and how he squints into the falling snow at her departing carriage is heartbreaking. You can see his world collapsing around him as Margaret leaves….without looking back. 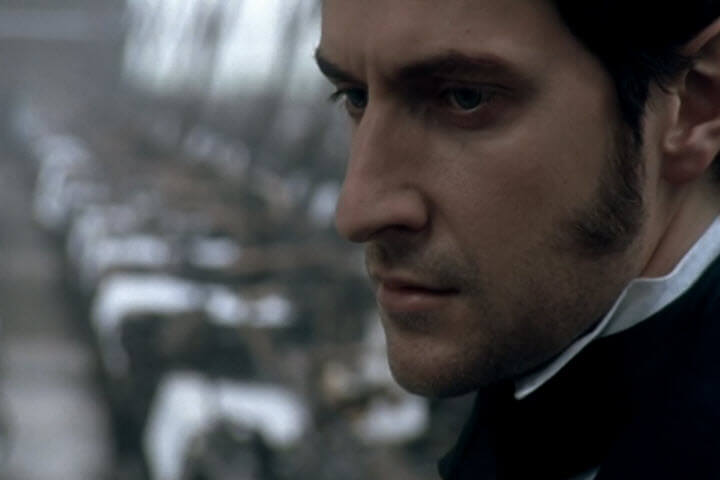 What is so memorable about this moment is that John not only contemplates the business he lost but also recalls the first time he saw Margaret. The sorting room is more than just a sorting room. It is the place where Margaret came into his life. John Thornton is quite the romantic! 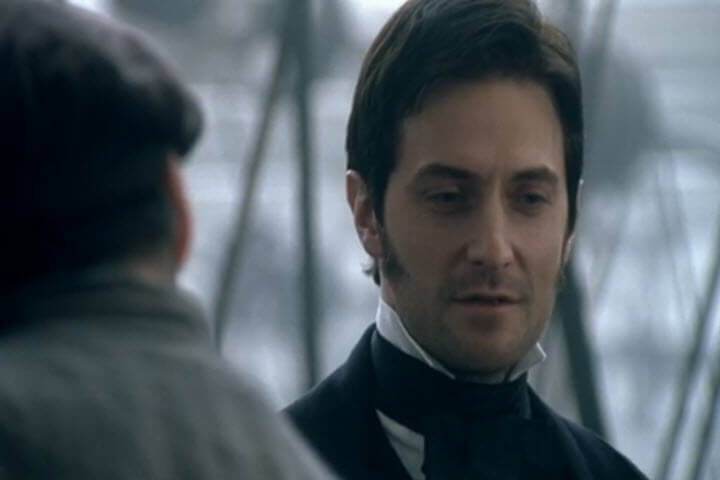 Oh, wow. The look here when John learns that the man at the train station is Margaret’s brother. Despite facing financial ruin, he looks like the weight of the world suddenly lifted from his shoulders. 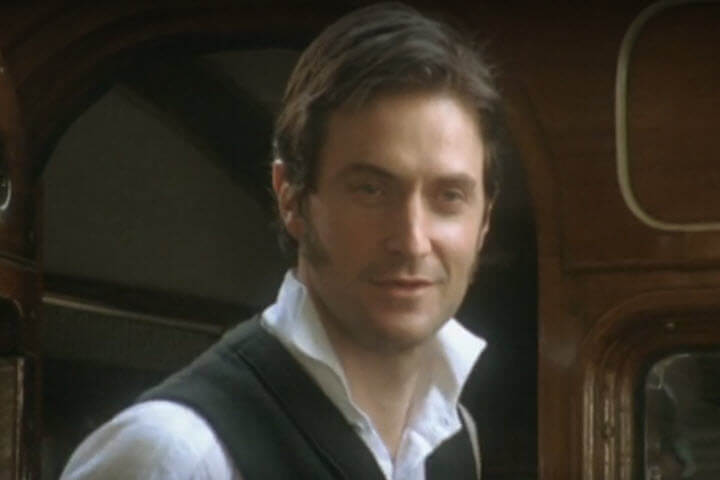 The culminating moment of these two lovers. Every expression on John’s face is swoon-worthy. The scene is gorgeous and soft from beginning to end. I ended up with at least 10 screen captures. But I chose this moment. The moment John first sees Margaret on the platform. Although, the moment he realizes she is coming home with him was a close second!

There you have it! 15 of the most memorable and romantic John Thornton moments from North and South. I cannot thank Richard Armitage enough for bringing this complex leading man to life. Now, if you’ll excuse me, I need to go watch this epic romantic period drama. Again.

Did we capture your favorite John Thornton moment from North and South? What scenes would you add? Drop me a line below! I’m always up for a chat about John Thornton!

Our romance-themed entertainment site is on a mission to help you find the best period dramas, romance movies, TV shows, and books. Other topics include Jane Austen, Classic Hollywood, TV Couples, Fairy Tales, Romantic Living, Romanticism, and more. We’re damsels not in distress fighting for the all-new optimistic Romantic Revolution. Join us and subscribe. For more information, see our About, Old-Fashioned Romance 101, Modern Romanticism 101, and Romantic Living 101.
Pin this article to read later! And make sure to follow us on Pinterest.
By Catherine on February 22nd, 2019

11 thoughts on “John Thornton: 15 Moments Guaranteed to Make You Swoon”